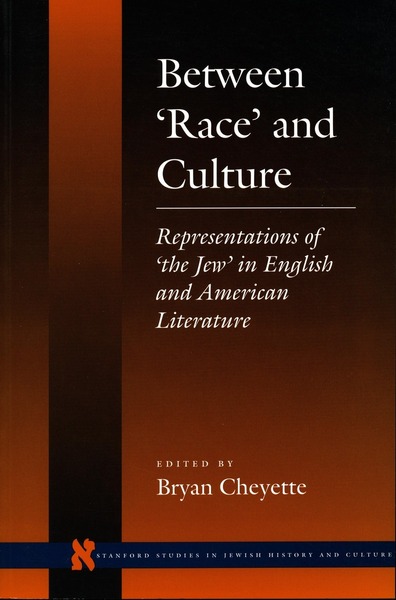 Between ‘Race’ and Culture
Representations of ‘the Jew’ in English and American Literature
Edited by Bryan Cheyette
SERIES: Stanford Studies in Jewish History and Culture

This collection of essays examines various representations of “the Jew” in British and American literature in the nineteenth and twentieth centuries. It analyzes in detail the literary racism and antisemitism of some of the most important and influential writers of this period, including Dickens, Trollope, James, Eliot, Pound, Joyce, Woolf, and Orwell, as well as such marginal figures as Dorothy Richardson, Stevie Smith, and Michael Gold. The contributors are all well-known Anglo-American literary, cultural, or feminist critics; some have written extensively on literary racism or antisemitism, others are working in this area for the first time.

The collection does not impose a schema or new orthodoxy, but instead encourages a plurality of approaches to a difficult and always contentious issue that has been demarcated into broadly defined “politically correct” and “liberal humanist” positions. Liberal humanism asserts that the ameliorating western canon has, by definition, nothing to do with racism or antisemitism. Political correctness wishes to exclude from the academy any literary text deemed to reinforce oppressive stereotypes. This volume adopts neither position, arguing instead that these two supposedly antagonistic approaches are, in fact, mirror-images of each other.

“In cutting-edge critiques of race and gender, each as a value of ‘otherness,’ the contributors bring to light refreshingly new and insightful understandings of familiar works. As a result, readers may not read any of these works the same way again. Even the canonically enforced distinction between the two national literatures begins to break down in the face of these contributors’ exciting new work.”—James E. Young, University of Massachusetts