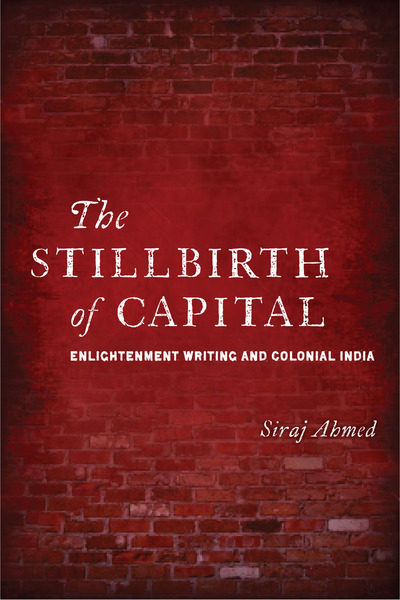 This book targets one of the humanities' most widely held premises: namely, that the European Enlightenment laid the groundwork for modern imperialism. It argues instead that the Enlightenment's vision of empire calls our own historical and theoretical paradigms into question. While eighteenth-century British India has not received nearly the same attention as nineteenth- and twentieth-century empires, it is the place where colonial rule and Enlightenment reason first became entwined. The Stillbirth of Capital makes its case by examining every work about British India written by a major author from 1670 to 1815, a period that coincides not only with the Enlightenment but also with the institution of a global economy.

In contrast to both Marxist and liberal scholars, figures such as Dryden, Defoe, Voltaire, Sterne, Smith, Bentham, Burke, Sheridan, and Scott locate modernity's roots not in the birth of capital but rather in the collusion of sovereign power and monopoly commerce, which used Indian Ocean wealth to finance the unfathomable costs of modern war. Ahmed reveals the pertinence of eighteenth-century writing to our own moment of danger, when the military alliance of hegemonic states and private corporations has become even more far-reaching than it was in centuries past.

"This is an original book that adopts a historical materialist approach in order to question dominant readings of Enlightenment ideas. Ahmed's research into Britain's economic activities in India and his engaging rereading of individual texts make this an indispensible book for scholars working in 18-century studies. His engagement with contemporary postcolonial criticism, moreover, and the book's revisionist approach, will be of value too to postcolonial scholars."

"This ambitious book takes on contemporary critics of colonial discourse studies on its way to making a powerful, innovative argument about the violent histories of European militarized trading companies in the Indian Ocean and the capacity of eighteenth-century texts to critically register these violent practices. Ahmed's prose is the equal of his scholarship, supple and mature in every regard."

"This is an excellent book that argues with and challenges our understanding of the European Enlightenment's intellectual and material engagement with Europe's imperial history and fiscal practices, especially in colonial India. It will be of value to political and postcolonial theorists as well as to scholars with interest in Enlightenment studies, piracy, and the development of sentimentalism in the long eighteenth century."