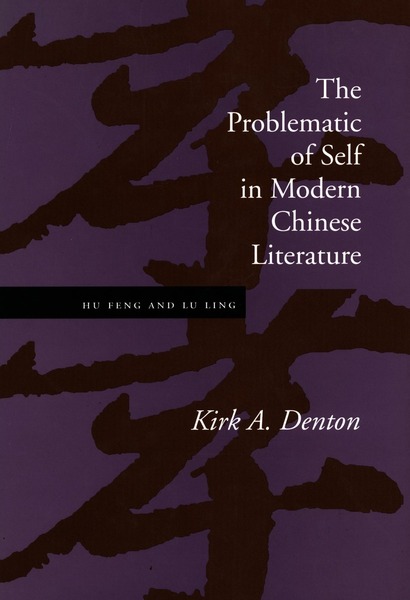 The Problematic of Self in Modern Chinese Literature
Hu Feng and Lu Ling
Kirk A. Denton

Lu Ling (1921-94) was one of modern China's most intensely psychological writers, foregrounding in his many novels and short stories the narrative representation of consciousness and the individual psyche. His mentor Hu Feng (1902-85), a leftist literary theorist, was a leading proponent of the subjective view of literature, who asserted an active and dynamic role for the self in the creative process. In the 1930's and 1940's, when they were most productive, Lu Ling and Hu Feng stood for a position in the leftist literary field that was opposed to the political, utilitarian view of literature held by Mao Zedong and the cultural bureaucrats of the Chinese Communist Party (CCP). The tension that existed between these two positions before the revolution exploded after the CCP came to power. In 1955, Hu Feng, Lu Ling, and a group of other writers associated with Hu Feng became the objects of a national media assault that led to their arrest and imprisonment.

Centered on these two key figures, this study explores in theoretical and fictional representations of the subject a problematic at the heart of the experience of modernity in China. Chinese scholarship in the recent post-Mao liberalization has tended to represent Hu Feng and Lu Ling as heroic promoters of May Fourth Enlightenment in the face of the oppressive and authoritarian legacy of Yan'an and the Maoist discourses of revolutionary collectivism. Rather than a confrontation between the values of personal enlightenment and rational salvation, the author sees Chinese modernity as the interaction and interdependence of the two.

Subjectivism and psychological fiction constitute an assertion of an empowered subject against the CCP's efforts to inscribe the subject into the ideology of collective self-sacrifice. But the writings of Hu Feng and Lu Ling are also discursive responses to the deeper epistemological problem of the self and its relation to the outer world engendered by the reception of Western discourses of modernity. Hu Feng's response was to merge the social-historical orientation of the realist mode with the subjectivism of romanticism, thus allowing for a potential unity of self with the outer world through the creative process. Lu Ling's intellectual characters are emblematic of this modern problematic of self: minds caught in a schizophrenic attraction/revulsion with romantic individualism and the relinquishing of self to the revolutionary power of the masses.

The author also shows that beneath Hu Feng's and Lu Ling's modern theoretical and fictional attention to the subject are ties to the neo-Confucian self and its relation to tian, the divine. By looking at modernity in terms of discursive responses shaped by traditional cultural desires, he aims to contribute to a breakdown of the strict division between modernity and tradition that continues to define modern Chinese literature.

Kirk A. Denton is Associate Professor of Chinese Language and Literature at Ohio State University. He is the editor of Modern Chinese Literary Thought: Writings on Literature, 1893-1945 (Stanford, 1996).