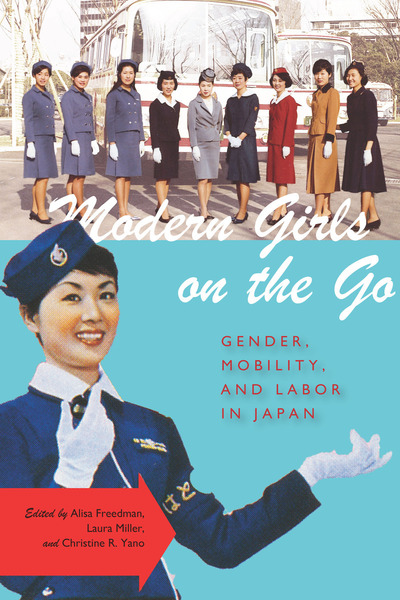 This spirited and engaging multidisciplinary volume pins its focus on the lived experiences and cultural depictions of women's mobility and labor in Japan. The theme of "modern girls" continues to offer a captivating window into the changes that women's roles have undergone during the course of the last century.

Here we encounter Japanese women inhabiting the most modern of spaces, in newly created professions, moving upward and outward, claiming the public life as their own: shop girls, elevator girls, dance hall dancers, tour bus guides, airline stewardesses, international beauty queens, overseas teachers, corporate soccer players, and even female members of the Self-Defense Forces. Directly linking gender, mobility, and labor in 20th and 21st century Japan, this collection brings to life the ways in which these modern girls—historically and contemporaneously—have influenced social roles, patterns of daily life, and Japan's global image. It is an ideal guidebook for students, scholars, and general readers alike.

Alisa Freedman is Associate Professor of Japanese Literature and Film at the University of Oregon.

Laura Miller is the Ei'ichi Shibusawa-Seigo Arai Professor of Japanese Studies and Professor of Anthropology at the University of Missouri-St. Louis.

Christine R. Yano is Professor and Chair of Anthropology at the University of Hawai'i at Manoa.

"Modern Girls on the Go takes us around Japan and around the world to discover how Japanese women have represented and shaped the technologies of modernity—among them capitalism, print culture, consumerism, and transportation systems—throughout the twentieth century and beyond . . . This is a book not only important to scholars engaged in the study of Japanese women's and gender history, but also excellent for classroom use at both the undergraduate and graduate level."

"The volume highlights the importance of interdisciplinary analysis to fully understand a complex phenomenon in an unprecedentedly shifting era—the phenomenon of 'historical and cultural contingency.' This collection also clearly depicts what working outside the home meant to these modern girls, showing how to step boldly out of the shadows of gender norms. Japanese women were engaged in gendered labor. This book mirrors these women's diligent efforts and pride in their occupations, which provided an innovative and meaningful life beyond their home—as many girls moved to the public sphere on a quest for independence and a new persona."

"In Modern Girls on the Go: Gender, Mobility, and Labor in Japan, editors Alisa Freedman, Laura Miller, and Christine R. Yano have compiled an important collection on women and work in the 20th and 21st centuries Japan . . . As a result of the interdisciplinary structure of this collection, the assembled essays offer useful contributions to a variety of fields and are accessible to academic and general readers alike. The editors organized the volume into four sections . . . this organization of chapters serves to guide the reader through distinct sociohistorical periods while masterfully weaving together the connections between 'gender', 'mobility', and 'labor' throughout Japan's period of modernization . . . It is difficult to pinpoint any shortcomings in the volume; rather, it only left this reader wanting more . . . In reading Freedman, Miller, and Yano's outstanding collection, one hopes that these two debates will cease to be seen as oppositional pathways for Japanese women, and that—following in their 'modern girl' predecessors' footsteps—they will take the lead in moving Japan into a more prosperous and egalitarian era."

"Broad in scope, Modern Girls on the Go will be of use to students of gender, mobility, labor, and visual media within the field of Japanese studies, as well as to anthropologists and scholars interested in hybrid or interdisciplinary research methods. Spanning Japan's modernization era to the present day, the scholarship presented here is a valuable reminder of the light a historical approach can shed on anthropological study . . . This edited volume draws some truly original conclusions and offers an ambitious and far-reaching account of the methods and theories with which we may approach the image of the modern girl. Modern Girls on the Go is a valuable contribution to extant scholarship which indicates the future collaborative potential of a variety of disciplines within Japanese studies."

"This interdisciplinary volume pays serious attention to women's occupations that have been given short shrift. From shop girls to soccer players, these essays show women venturing out across the decades, with the meaning of 'modern' changing as the women themselves challenge the times in which they live. Through these pages, one can see how Japan's 'modern girls' of the historical past still resonate in the present."

"Wave goodbye to your stereotypes of Japanese working women. This innovative and insightful collection reveals how stewardesses, dancehall girls, and other women in motion challenged social norms and reshaped gender roles in Japan's modern transformation. Written by leading scholars from a range of disciplinary perspectives, these essays are sophisticated, eye-opening, and endlessly fascinating."

—William M. Tsutsui, author of Godzilla on My Mind 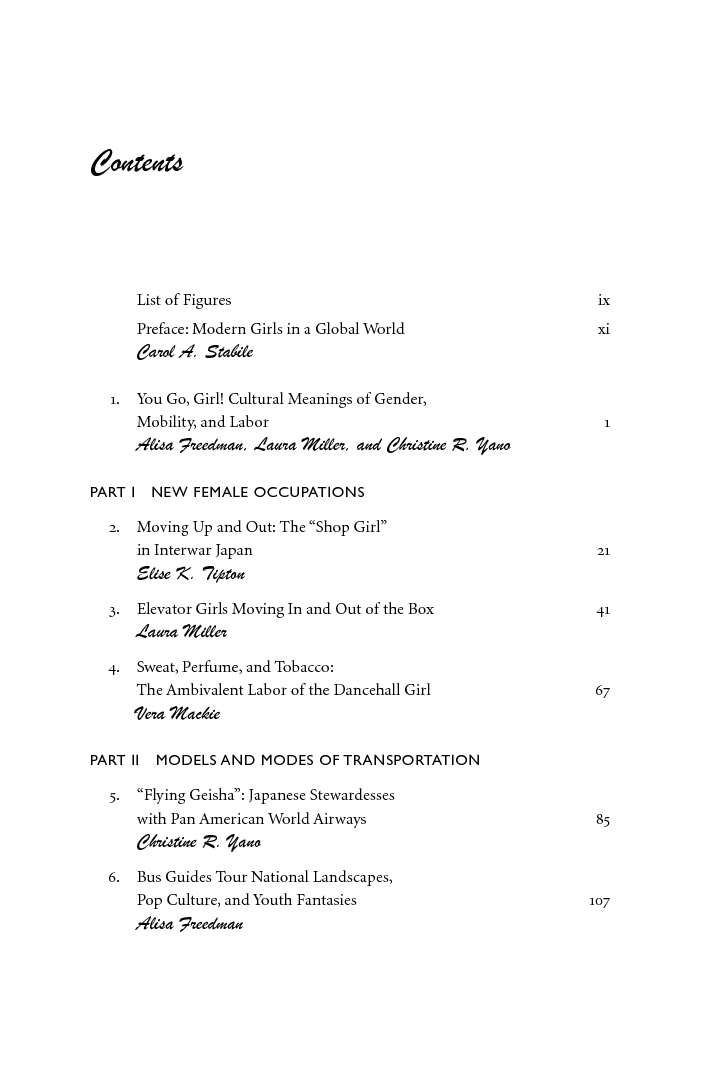 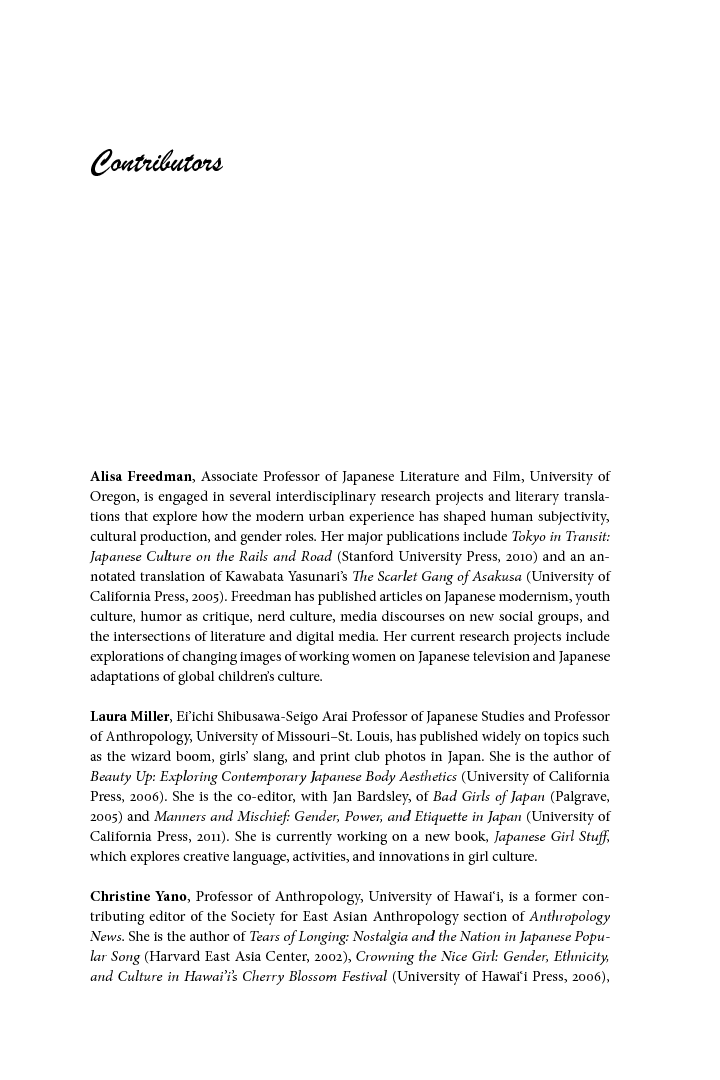 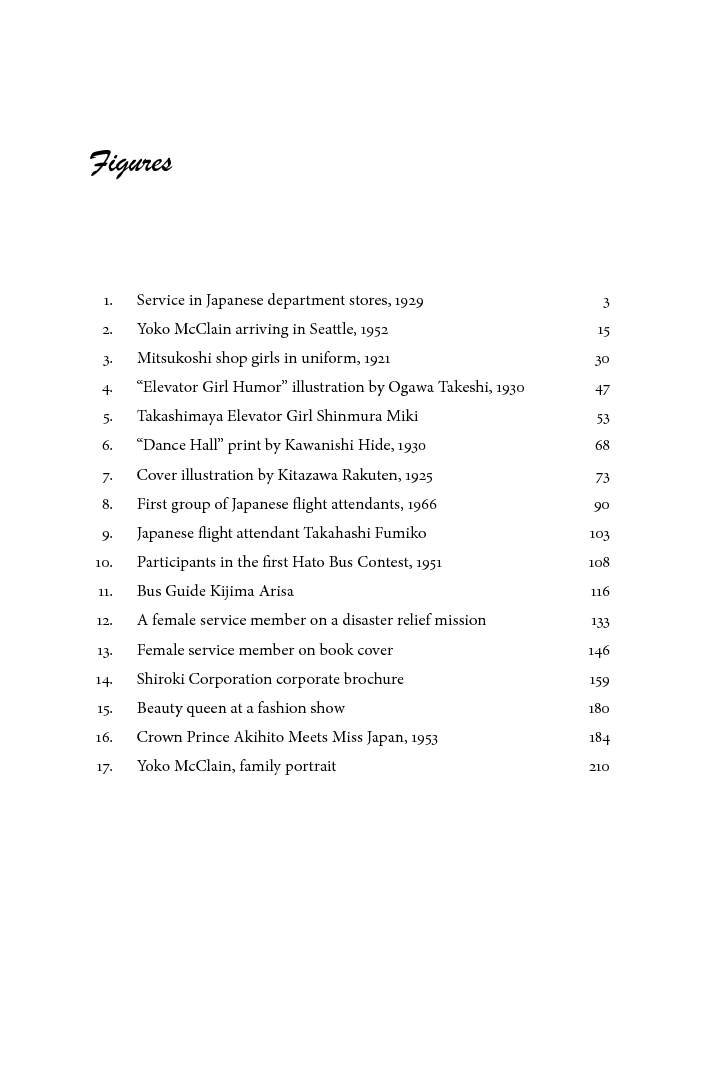 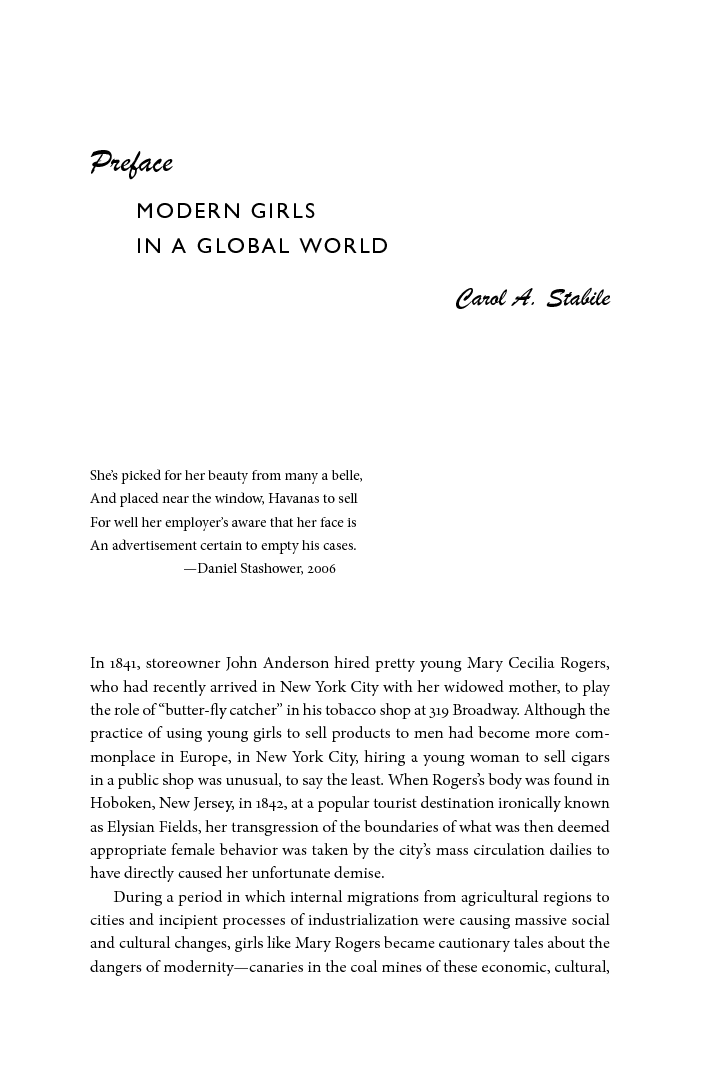