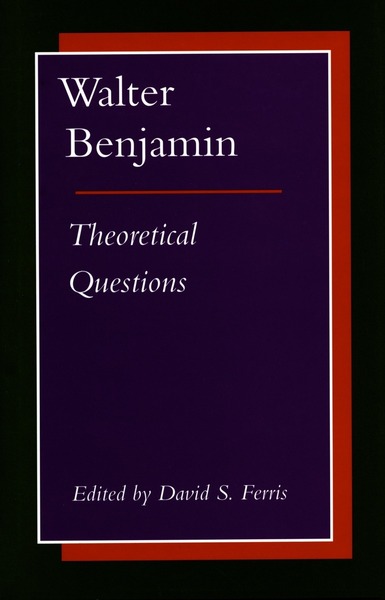 This collection of nine essays focuses on those writings of Walter Benjamin (1892-1940) on literature and language that have a direct relevance to contemporary literary theory, notably his analyses of myth, violence, history, criticism, literature, and mass media.

In an introductory essay, David S. Ferris discusses the problem of history, aura, and resistance in Benjamin’s later work and in its reception. Samuel Weber, in a reading of Benjamin’s most influential essay, “The Work of Art in the Age of Mechanical Reproduction,” analyzes the status of the image and technology in Benjamin’s own terms and in the shadow of Heidegger. Rodolphe Gasché devotes himself to an analysis of Benjamin’s dissertation on the German Romantics, providing a valuable guide to a major text that has yet to appear in English translation.

David S. Ferris is Associate Professor of Comparative Literature at Queen's College and the Graduate Center of the City University of New York. He is the author of Theory and the Evasion of History.

“An excellent collection of essays on a thinker who continues to be a provocation and source of insight for a wide variety of intellectuals, teachers, and students interested in literature, philosophy, sociology, history, the visual arts, and the media.”—Ian Balfour, York University