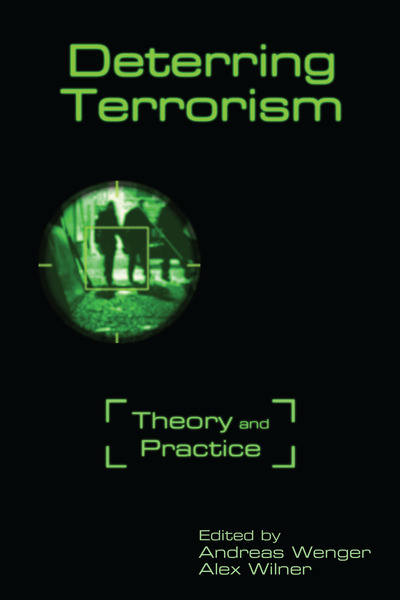 During the Cold War, deterrence theory was the cornerstone of U.S. foreign policy. Following the 9/11 terrorist attacks, however, popular wisdom dictated that terrorist organizations and radical fanatics could not be deterred—and governments shifted their attention to combating terrorism rather than deterring it.

This book challenges that prevailing assumption and offers insight as to when and where terrorism can be deterred. It first identifies how and where theories of deterrence apply to counterterrorism, highlighting how traditional and less-traditional notions of deterrence can be applied to evolving terrorist threats. It then applies these theoretical propositions to real-world threats to establish the role deterrence has within a dynamic counterterrorism strategy—and to identify how metrics can be created for measuring the success of terrorism deterrence strategies. In sum, it provides a foundation for developing effective counterterrorism policies to help states contain or curtail the terrorism challenges they face.

Andreas Wenger is Professor of International Security Policy and Director of the Center for Security Studies at the ETH Zurich (Swiss Federal Institute of Technology), Switzerland.

Alexander Wilner is Senior Researcher at the Center for Security Studies at the ETH Zurich, Switzerland.

"The articles in the second section on deterring WMB terrorism contain insightful and important theoretical observations, the most important of which is the need to shift the emphasis in the theory from punishment to denial . . . The authors in this book make many important and valuable contributions."

"The volume, as its editors acknowledge, is a first step in building the theoretical literature on this important subject."

"Growing out of a 2009 conference on the applicability of deterrence theory to terrorism, an exceptional volume compiled by Wenger and Wilner simultaneously offers differing scholarly opinions while maintaining a linearity and development of ideas usually not accomplished in such works . . . [T]he book is strengthened by the specific attention it gives to the possibility of deterring WMD attacks, and is complemented by several empirical studies of the deterrence of terrorism in practice . . . [E]ach contributor deserves credit for showing restraint in offering deterrence as merely one of many possibilities within a broader counterterrorism policy, rather than as a comprehensive solution itself. Recommended."

"Deterring Terrorism represents the state of the art in the influencing of terrorist behavior. With contributions from leading researchers in the field, it integrates the most advanced thinking on deterrence with rich empirical studies of the handling of contemporary terrorist problems."

"Suicidal terrorism is widely considered to pose insuperable problems for theories of deterrence. By bringing together deterrence theorists with terrorism specialists this volume rises to the challenge, furthering our understanding of both areas of inquiry and demonstrating the possibilities and limitations of coercive threats in the face of such an extreme test."

"Deterring terrorist attacks remains a fundamental challenge to international security in the contemporary era. Here is an outstanding volume on this complex subject with much food for thought for scholars and practitioners alike. The chapters offer both depth and breadth to an intractable policy issue in the most compelling manner." 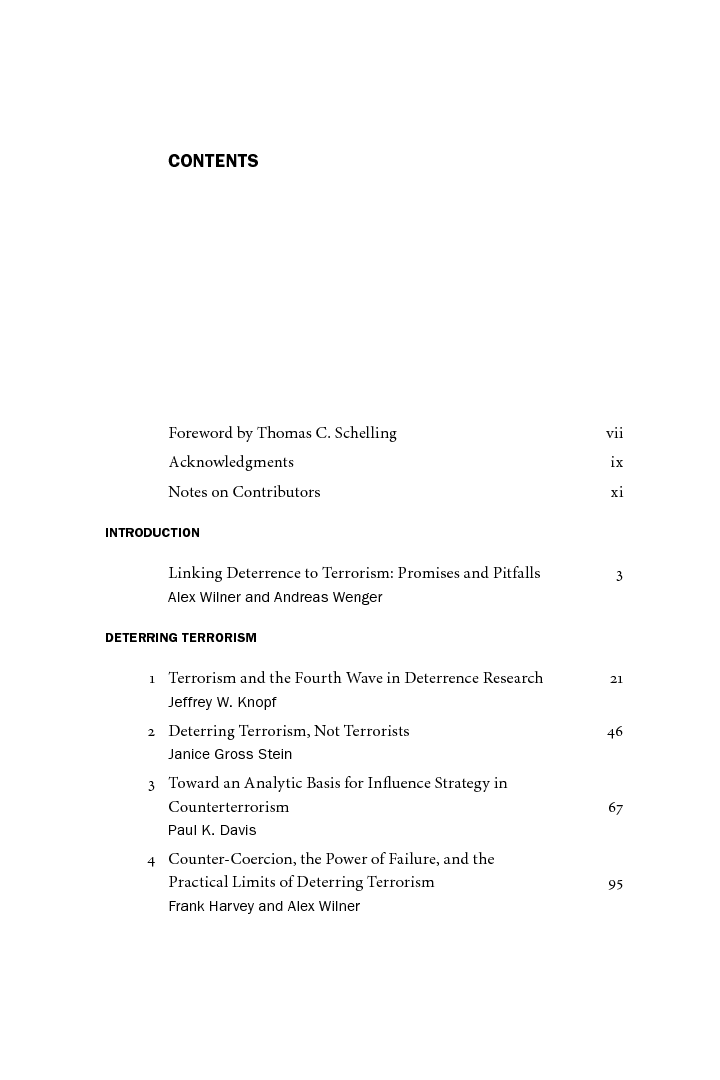 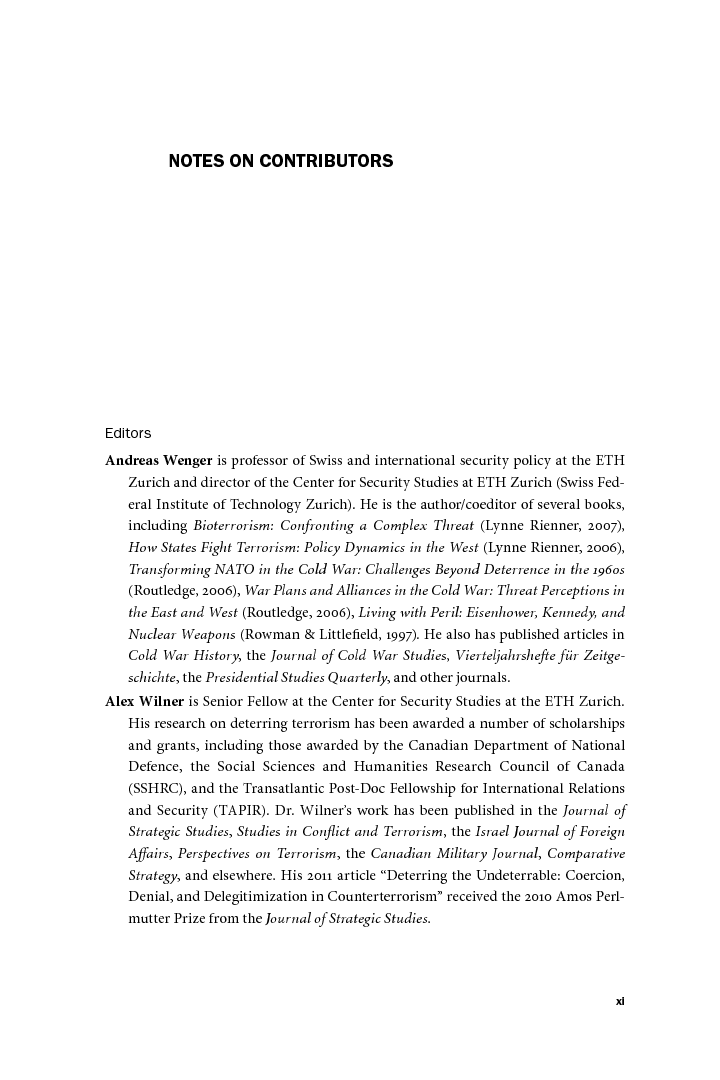 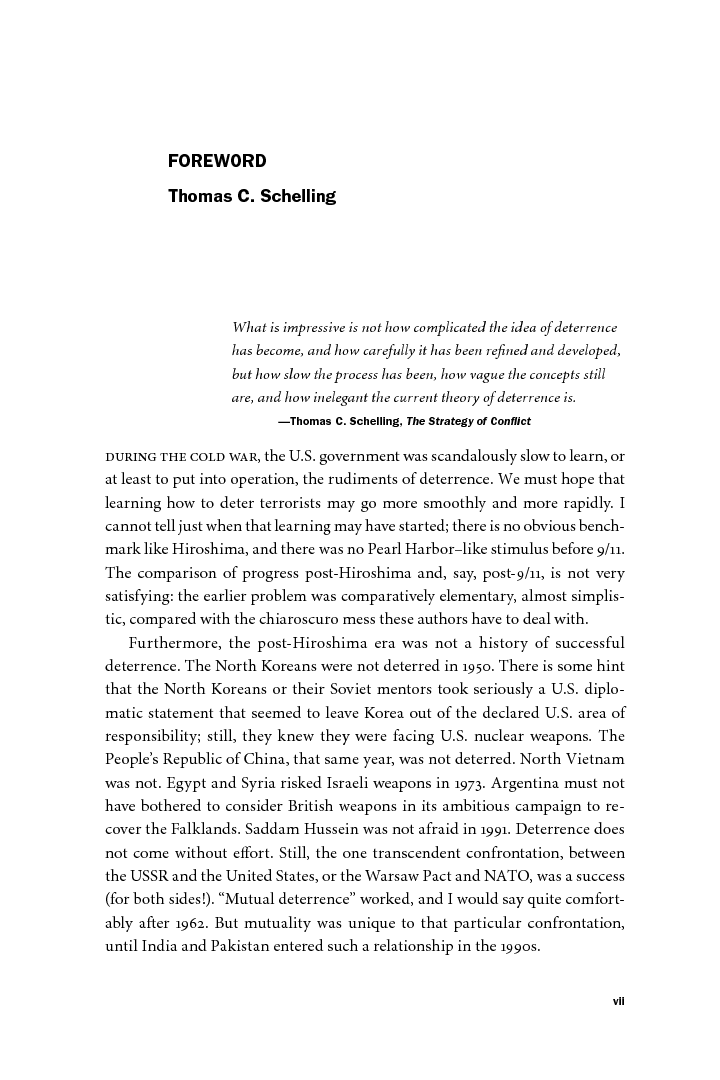 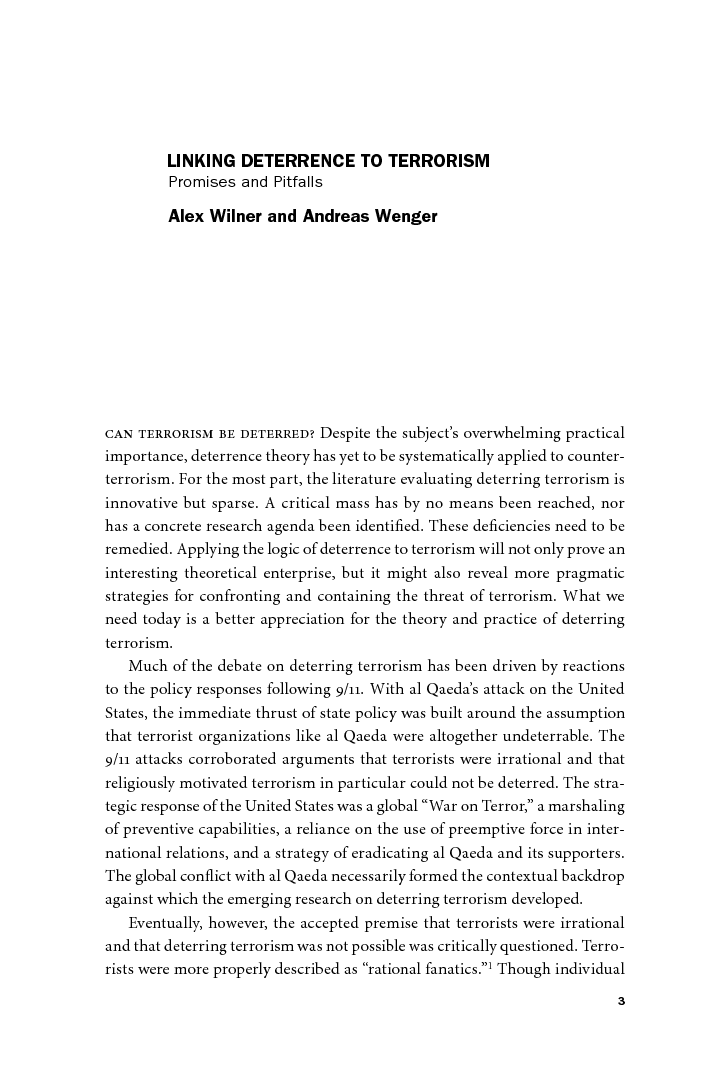