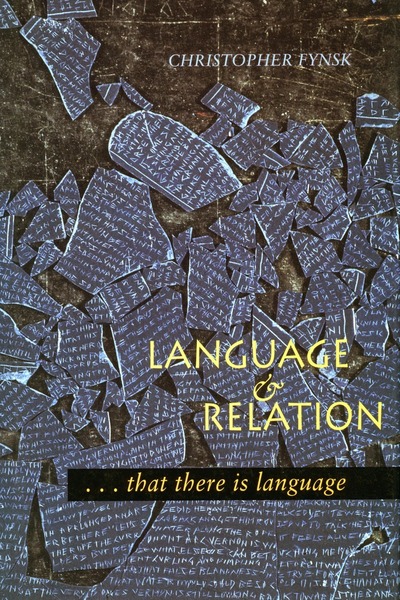 Language and Relation
. . . that there is language
Christopher Fynsk

The most recent version of the “linguistic turn,” the revolution in language theory shaped by Saussure’s structural linguistics and realized in a sweeping revision of investigations throughout the humanities and social sciences, has rushed past the most basic “fact”: that there is language. What has been lost? Almost everything of what Heidegger tried to approach under the name of “ontology” until the word proved too laden by common misapprehension to be of use. Most immediately, this is everything of language that exceeds the order of signification, together with the subject’s engagement with this “excess” that is the (non)ground of history and the material site of all relationality, beginning with that unthought that is widely termed “culture.”

Language and Relation returns to this site in close readings of meditations on language by Martin Heidegger, Luce Irigaray, Paul Celan, Walter Benjamin, and Maurice Blanchot. It seeks to move with these authors beyond the order of signification and toward the an-archic grounds of relation (of all relations between self and other, and of relation in general), exploring the possibility for a strong link between issues in modern philosophy of language and contemporary socio-political concerns.

Christopher Fynsk is Professor of Comparative Literature and Philosophy at Binghamton University. He is the author of Heidegger: Thought and Historicity.