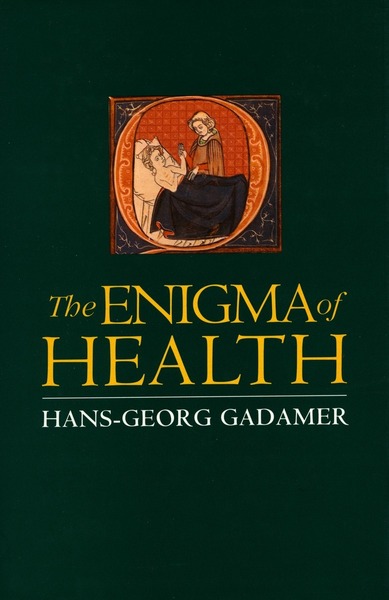 The Enigma of Health
The Art of Healing in a Scientific Age
Hans-Georg Gadamer, translated by Jason Gaiger and Nicholas Walker

In this important new book, Hans-Georg Gadamer discusses the transformation in human self-understanding wrought by the scientific worldview, focusing in particular on the unparalleled achievements of modern medicine.

He explores the ethical and humanist issues raised by the technological successes of modern clinical practice, and relates them to the classical conception of "praxis" in the philosophical tradition.

In a series of lucid and engaging analyses, Gadamer eloquently defends the idea of medicine, not only as a "science of health, but as an "art" of hermeneutic relevance, requiring the exercise of practical judgment and personal interpretation. We should, he argues, recognize the limits of purely technical approach to healing, as well as the importance of a qualitative approach to medical treatment.

Written by one of the leading philosophers of the twentieth century, this brilliant meditation on health, illness, and the art of healing will be of interest to general readers as well as students of philosophy and social thought.

Hans-Georg Gadamer, now ninety-five, is one of Germany's most eminent philosophers. Many of his books have appeared in English translation, including the seminal Truth and Method (Sheed and Ward, Ltd., l975) and, closest in topic, perhaps, to this book, Reason in the Age of Science (MIT, l982).

“This is an extraordinarily thoughtful and insightful analysis of major contemporary problems dealing with the physician-patient relationship and the attitudes of society toward health, illness, and death. I know of no work that attempts to do what Gadamer does here. The book will serve educators in the humanities—especially those in philosophy, psychology, and sociology—as well as many persons in the health professions. I would be pleased if its message were absorbed by every student and practitioner of medicine.”—Victor Vaughan, M.D., Stanford University School of Medicine