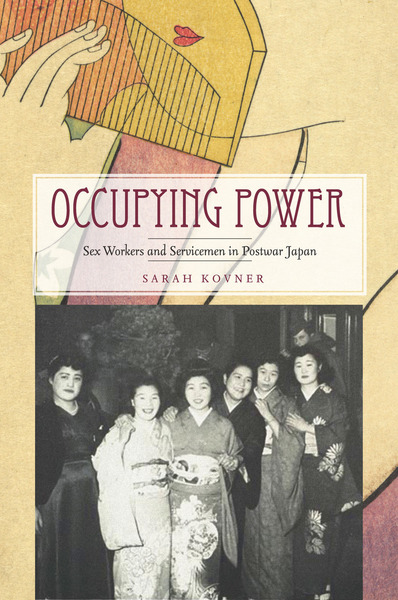 Winner of the 2013 Book Prize, sponsored by the Southeast Conference Association for Asian Studies.

The year was 1945. Hundreds of thousands of Allied troops poured into war-torn Japan and spread throughout the country. The effect of this influx on the local population did not lessen in the years following the war's end. In fact, the presence of foreign servicemen also heightened the visibility of certain others, particularly panpan—streetwalkers—who were objects of their desire.

Occupying Power shows how intimate histories and international relations are interconnected in ways scholars have only begun to explore. Sex workers who catered to servicemen were integral to the postwar economic recovery, yet they were nonetheless blamed for increases in venereal disease and charged with diluting the Japanese race by producing mixed-race offspring. In 1956, Japan passed its first national law against prostitution, which produced an unanticipated effect. By ending a centuries-old tradition of sex work regulation, it made sex workers less visible and more vulnerable. This probing history reveals an important but underexplored aspect of the Japanese occupation and its effect on gender and society. It shifts the terms of debate on a number of controversies, including Japan's history of forced sexual slavery, rape accusations against U.S. servicemen, opposition to U.S. overseas bases, and sexual trafficking.

Sarah Kovner is Assistant Professor of History and Asian Studies at the University of Florida.

"Sarah Kovner's path breaking study of the Japanese sex industry during the Allied occupation brings to light that the Japanese historical toleration of state-regulated prostitution nonetheless has its limits when confronted with a new reality . . . Occupying Power: Sex Workers and Servicemen in Postwar Japan otherwise makes a compelling case and should be regarded as an indispensable read for all students who explore the history of commercial sex in Japan, the Asia-Pacific region, and beyond."

"Overall, Occupying Power is a new and important addition to the recently growing literature of the social and grassroots history of postwar Japan . . . The book further deserves praise for incorporating up-to-date developments in the fields of women's, feminist, and sexuality studies, as well as empire and nationalism studies, into the study of occupied Japan, making the book multidisciplinary by nature. Without doubt, therefore, Occupying Power should attract a wide audience in diverse fields."

"With rich data and numerous insights, Occupying Power offers a valuable contribution on a number of levels . . . The book contains detailed descriptions of the complex history of sex work under the Allied Occupation in vivid narratives, which makes it an accessible and useful resource for anyone who is interested in Japanese history and the politics of sex work . . . Kovner's careful and nuanced analysis successfully complicates and challenges conventional approaches for understanding sex work and sex workers in Japan and beyond."

"Kovner's detailed analysis of this movement and the politics of prostitution is illuminating, explaining how sex industry bribery of Diet members facilitated crucial compromises ensuring that outlawing sex work in 1956 had limited practical impact."

"Occupying Power addresses an important subject, the multiple roles and shifting statuses of sex work in occupation-era Japan. . . [P]repares the ground for global perspectives and comparisons on sex work wherever occupation has occurred. Students and scholars will find the book a welcome addition to their readings in the modern history of Japan and the still understudied occupation era in particular. . .[M]akes an exciting contribution to women's, feminist, and sexuality studies."

"Relying on a range of Japanese- and English-language sources, this succinct volume offers a thick analysis of sex work in Japan from political, social, economic, and symbolic viewpoints. . . . Occupying Power is literally a powerful book that adds important insight to the fields of modern Japan, women's studies, and 'America in the world.' This study deserves a wide audience."

"It is well-researched, thoughtful and courageous, and provides much material for scholarly and social debate. Occupying Power nicely complicates our understanding of the power dynamics of occupation, and of the place of sexual interactions within those dynamics . . . I hope that Kovner's research inspires further interrogations of sexual relations under military occupation."

"[Kovner] reaches for and firmly grasps interconnections, whether across national boundaries or periods of time, and frequently with an eloquence that requires rereading and sharing. . . . The rave reviews coming in from leading scholars suggest that Kovner already has vaulted into the front ranks of Japanese scholarship. Summing Up: Essential."

"Although there have been many books published in recent years dealing either with the post-WW II period of Japanese history or with modern Japanese gender history (whether the focus is on geisha, comfort women, or occupation-era sex workers), this new book by a young historian manages rather brilliantly to advance the discussion of all these interrelated issues. In presentation, the author's prose is entirely free of obfuscation and jargon. Kovner lays out her evidence so logically and clearly that a neophyte undergraduate could follow the interconnected strands of evidence and argument and the many ways even familiar categories such as geisha have sometimes been misconstrued. The author's fluency in Japanese opens up reams of evidence at a level not always seen in books about Japan. She reaches for and firmly grasps interconnections, whether across national boundaries or periods of time, and frequently with an eloquence that requires rereading and sharing . . . The rave reviews coming in from leading scholars suggest that Kovner already has vaulted into the front ranks of Japanese scholarship. Summing Up: Essential. All academic levels/libraries."

"Sarah Kovner has written a path-breaking work of Japanese history using a broad range of sources from Japanese, American, and British Commonwealth archives. This book will serve as the base line for studies in the history of sex work in postwar Japan for many years to come. Beyond that, it is an important study of women's history, sexuality, and military occupation in the twentieth century, and should be of interest to scholars in these fields worldwide."

"Rich, theoretically-informed, and based on extensive archival research in several countries, Sarah Kovner's study sheds new light on a hitherto unexplored aspect of the Allied occupation of Japan—its sexual politics."

—Vera Mackie, University of Wollongong, and author of Feminism in Modern Japan: Citizenship, Embodiment and Sexuality

"This thorough and authoritative study enables the reader to gain a fresh understanding not only of the interactions between Japanese women and postwar occupying forces but also of the nation's view of itself at a time when Japan—despite its persistent reluctance to embrace interracial individuals—was concerned about its 'moral' standing in the international community."

"Sarah Kovner has tackled a delicate subject with tact, thoughtfulness, and academic rigor. Her important book will be of great interest not just to specialists in Japanese history, but to anyone interested in the consequences of war, occupation, and indeed human relations across cultures." 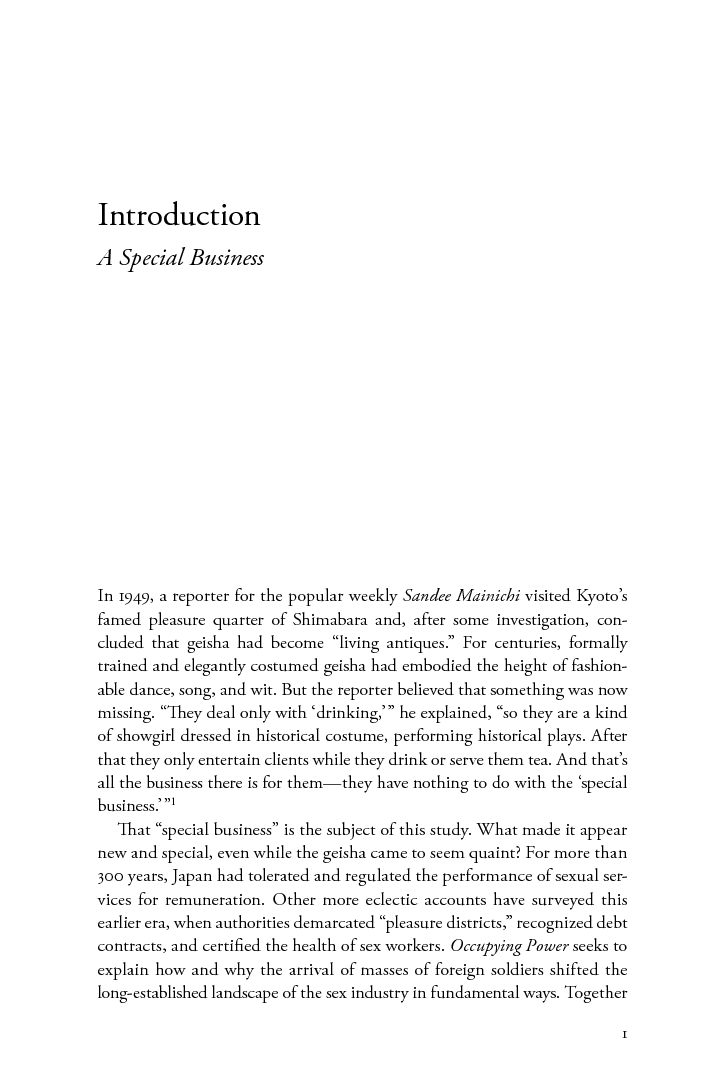 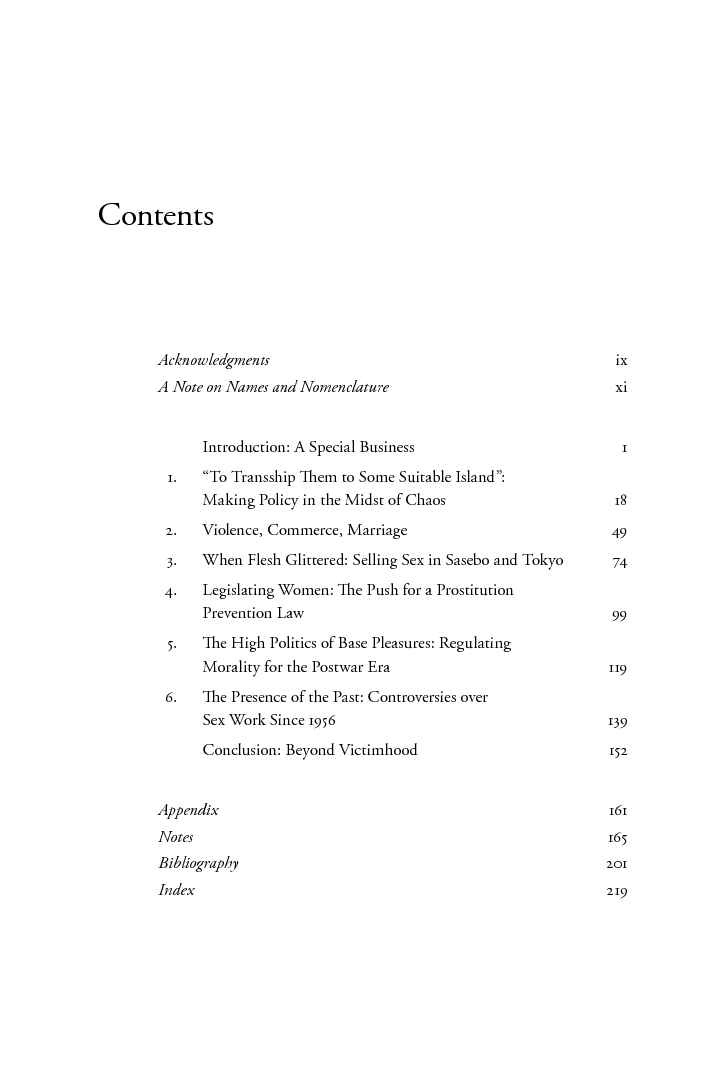