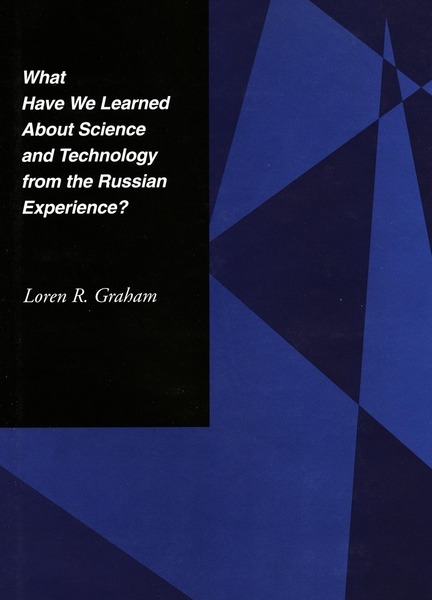 What Have We Learned About Science and Technology from the Russian Experience?
Loren R. Graham

At the time the Soviet Union broke apart in the late 1980’s, it possessed the largest scientific community in the world. The rapid development, in just a few decades, of such an immense scientific establishment—in a social and economic environment strikingly different from the West—presents an unusual opportunity for the world’s leading authority on Soviet science to examine how the Russian experience sheds light on the status and character of science and technology throughout the world.

The book is organized around five questions, each given its own chapter: “Is Science a Social Construction?” “Are Science and Technology Westernizing Influences?” “ How Robust Is Science Under Stress?” “ How Willing Are Scientists to Reform Their Own Institutions?” and “Who Should Control Technology?”

The author believes that the Russian example reveals in detail both the strengths and the weaknesses of social constructivism. Though many areas of Russian science show the unmistakable influence of social factors, the deviation of the Soviet Union from standard genetics for many years, followed by its eventual restoration, indicates the weakness of social constructivism and illustrates the relationship of science to reality. He further maintains that although science in Russia has been terribly abused, it nonetheless remains strong; it has proven to be much more resilient than most previous observers believed, and, furthermore, is not nearly as directly dependent on political freedom for its vitality as Western analysts maintained.

In the final section, the author makes two strong claims. The first comes from an examination of the social constructivist thesis that science is formed by social influences. His conclusion is that Russian science has indeed been influenced in that country in distinct ways, but not always in a fashion that will please radical social constructivists. The second strong claim is that contrary to the view of many Western scholars that science can flourish only in conditions of nurturing freedom, science turns out to be remarkably robust, able to flourish in adverse conditions.

Loren R. Graham holds a joint appointment as Professor of History of Science at the Massachusetts Institute of Technology and Harvard University. He is the author or editor of seven previous books on Soviet science.