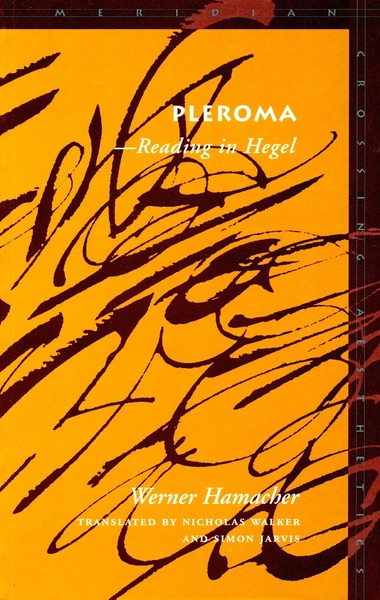 The violent transformations which Hegel's philosophy has uncovered and caused in the structure of philosophical terms and in the terms under which philosophy is possible is Hamacher's topic. Starting from Hegel's commentaries on biblical scripture, Hamacher traces the genealogy and unfolding of Hegel's thought into his mature works—the Phenomenology of Spirit, the Encyclopedia, the Philosophy of History—focusing throughout on the limits and borders, the limitations and extremities of its conceptual and textual movements.

Because the concept for Hegel is the end of the thing—the point where it peaks—because it occurs by severance from its representational content, the trace of this splitting appears imprinted into its discursive articulation. The Hegelian text is punctuated by a series of terms and topics that operate according to the logic of the turning point: one function activating its opposite, they serve as pores between mutually exclusive experiences and establish their unity. This dialectical procedure falters, its unity dissolves, the pores turn into aporias, wherever conceptual exigencies surpass the reality they have instilled. Hamacher shows that dialectics, proceeding by way of aporias, remains unable to account for its own movement. Hegel's system must be read from the point where its rupture fails to converge with its end.

Analyzing both the historical and the systematic aspects of Hegel's philosophy, addressing Kant and religious fetishism, Nietzsche and the impossible repetition of the same, Marx and the aroma of religion, Freud and the hysterical body, Hamacher's argument is directed toward what in Hegel's philosophy of spirit resists spiritualization and defeats philosophy. Aspiring to be the last philosophy, speculative idealism has to incorporate all previous systems and spiritualize its incorporation. Its logic of ingestion must, however, reject with repulsion and nausea (Ekel) everything that resists appropriation.

Emphasizing Hegel's claim to present the political theology of modern society, Hamacher shows that the mechanism of nausea meant to keep the system intact is in fact itself a mechanism foreign to its body; it averts the promised incorporation, defeats idealization, leaves the body politic disintegrated, and voids the claim of the most powerful ontology of modern society to mark the end, the completion and plenitude—the pleroma—of philosophy and history. What remains—the indigestible, the unreadable, the nondiscursive—demands yet another kind of discourse and another practical gesture: toward a pleroma other than Hegel's.

Werner Hamacher is currently a Professor in the University of Frankfurt's Institute for General and Comparative Literature (Institut für Allgemeine und Vergleichende Literaturwissenschaft) and at the European Graduate School in Saas-Fee, Switzerland.