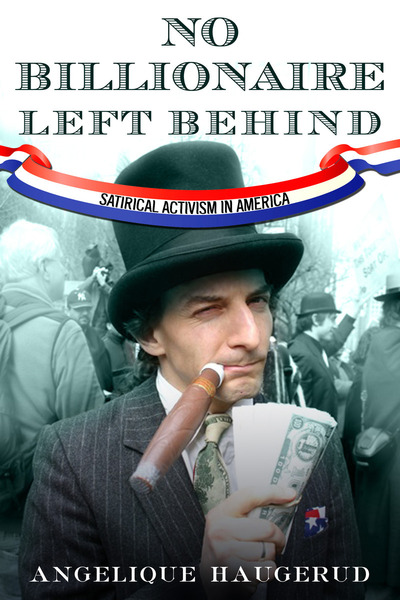 No Billionaire Left Behind
Satirical Activism in America
Angelique Haugerud

Growing economic inequality, corporate influence in politics, an eroding middle class. Many Americans leave it to politicians and the media to debate these topics in the public sphere. Yet other seemingly ordinary Americans have decided to enter the conversation of wealth in America by donning ball gowns, tiaras, tuxedos, and top hats and taking on the imagined roles of wealthy, powerful, and completely fictional characters. Why? In No Billionaire Left Behind, Angelique Haugerud, who embedded herself within the "Billionaires" and was granted the name "Ivana Itall," explores the inner workings of these faux billionaires and mines the depths of democracy's relationship to political humor, satire, and irony.

No Billionaire Left Behind is a compelling investigation into how satirical activists tackle two of the most contentious topics in contemporary American political culture: the increasingly profound division of wealth in America, and the role of big money in electoral politics. Anthropologist and author Angelique Haugerud deftly charts the evolution of a group named the Billionaires—a prominent network of satirists and activists who make a mockery of wealth in America—along with other satirical groups and figures to puzzle out their impact on politics and public opinion. In the spirit of popular programs like The Colbert Report and The Daily Show, the Billionaires demonstrate a sophisticated knowledge of economics and public affairs through the lens of satire and humor. Through participant observation, interviews, and archival research, Haugerud provides the first ethnographic study of the power and limitations of this evolving form of political organizing in this witty exploration of one group's efforts to raise hope and inspire action in America's current political climate.

Angelique Haugerud is Associate Professor of Anthropology at Rutgers University and Editor of American Ethnologist.

"No Billionaire Left Behind is an absorbing and entertaining account of the rise of political satire in the United States . . . The ethnography is theoretically sophisticated yet extraordinarily accessible. It will appeal to anyone interested in political or economic anthropology, social movements, or comparative political studies. Several books published in the wake of the financial crisis have demonstrated how anthropology can illuminate urgent economic and political issues . . . Angelique Haugerud's excellent ethnography fits squarely within this growing body of critical and relevant work."

"The activists profiled in Haugerud's lively study of political satire don tuxedos and furs for rallies and hold champagne flutes as protest props. Under fictive, ultra-rich personas like 'Alan Greenspend' and 'Robin Eublind', the Billionaires question 'the compatibility of wealth and democracy' through a polished form of 'political street theater' . . . Behind-the-scene details like prank-day jitters or the hours of improvisation and mannerism practice needed to get into 'billionaire shape' should charm fans of Stephen Colbert's satirical comedy, while grassroots organizations from any political bent will appreciate Haugerud's analysis of the efficacy of parody and image marketing. A danger of their theatrics is that details of the issues they champion can get lost among the irony-deficient. Nevertheless, Haugerud successfully illuminates America's staggering wealth inequality at the core of the Billionaire's message while investigating the comedic possibilities and limitations of their methods. "

"Angelique Haugerud's accessible and engaging book is important reading for anyone interested in the optimism of political satire, the hope that motivates activism, the clarity of critique, and the beauty of great ethnography. In Leave No Billionaire Behind, Haugerud deftly combines economic anthropology, activism, performance, and the literature from news and journalism to build her powerful portrait of what The Billionaires are trying to accomplish and why."

"This brilliant study of the 'Billionaires for Bush' explains how and why irony has become such a powerful vehicle of political sincerity in the age of neoliberal monology. Whether or not one believes that satire is capable of reopening the terms of political discourse in the West by itself, we would all do well to heed Haugerud's persuasive argument that parody has potential to 'defamiliarize the familiar' by surfacing and inverting our conventions of understanding the world. Activists like the Billionaires have generated political effects, she shows us, by occupying the language of power."

"In this pathbreaking book Angelique Haugerud presents a highly original account of novel forms of activism and engagement that seek to redefine the parameters of the political. It is difficult to imagine a more important or timely contribution to the comparative study of politics." 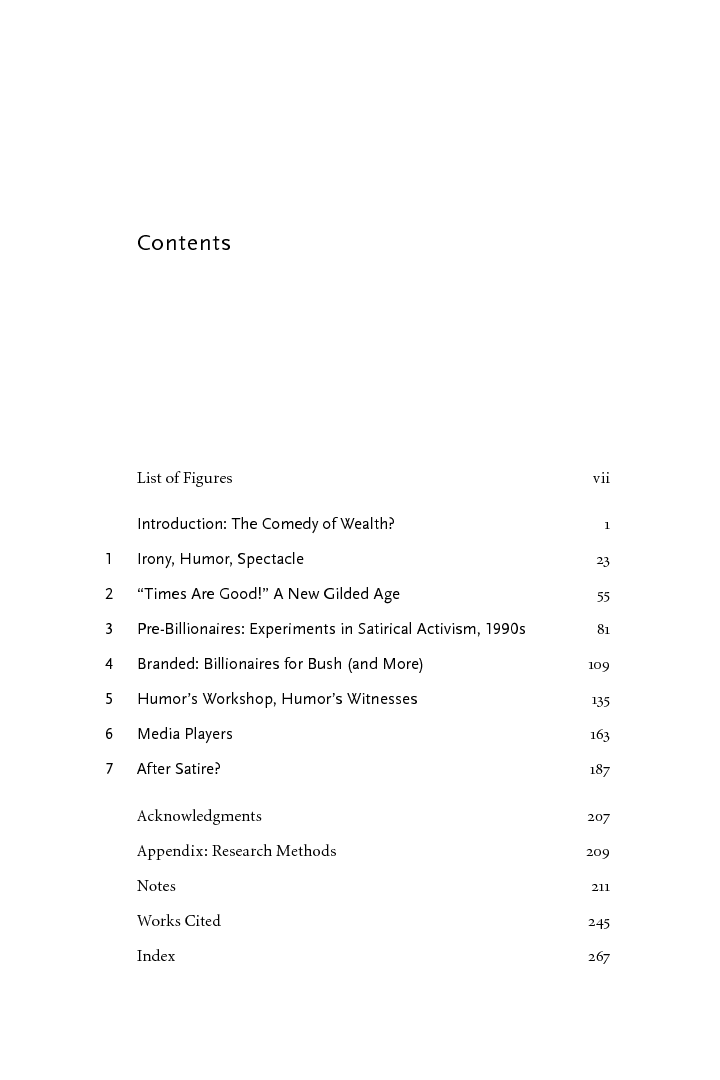 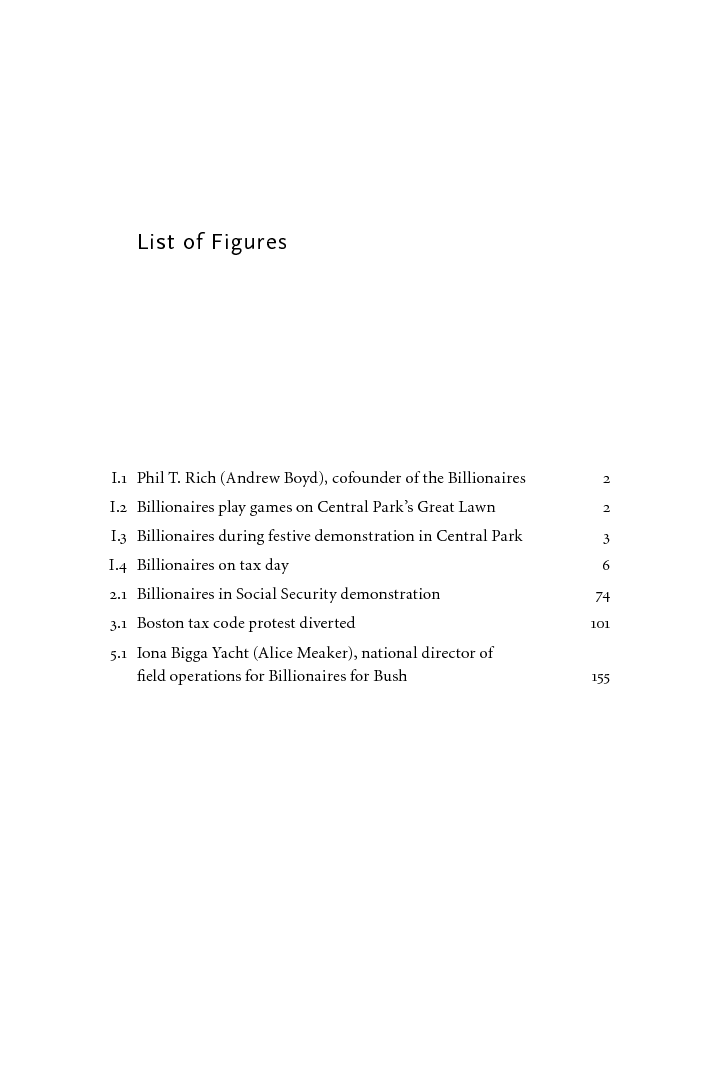 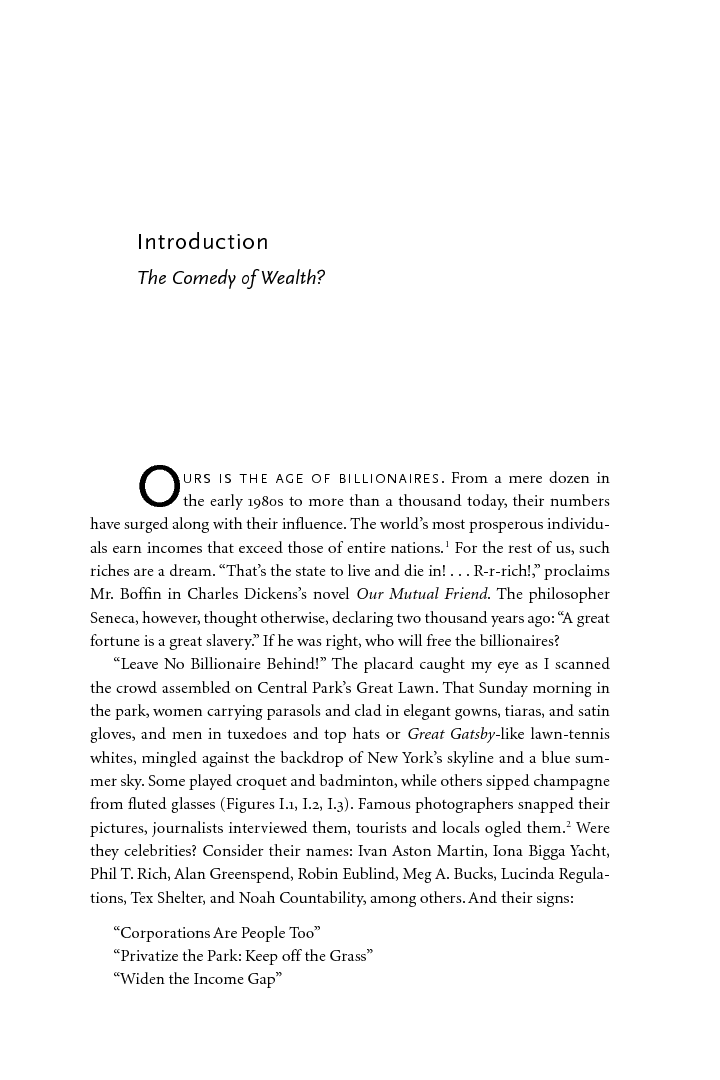