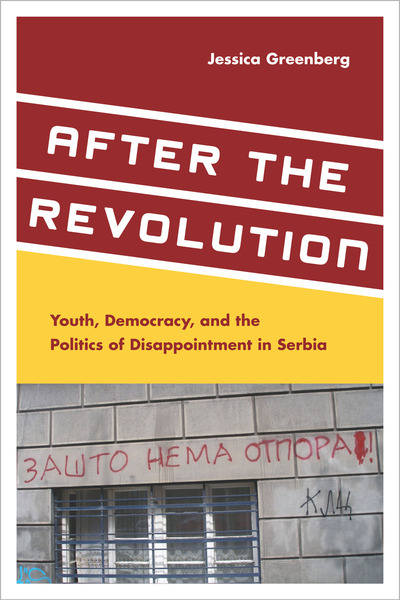 After the Revolution
Youth, Democracy, and the Politics of Disappointment in Serbia
Jessica Greenberg

What happens to student activism once mass protests have disappeared from view, and youth no longer embody the political frustrations and hopes of a nation? After the Revolution chronicles the lives of student activists as they confront the possibilities and disappointments of democracy in the shadow of the recent revolution in Serbia. Greenberg's narrative highlights the stories of young student activists as they seek to define their role and articulate a new form of legitimate political activity, post-socialism.

When student activists in Serbia helped topple dictator Slobodan Milosevic on October 5, 2000, they unexpectedly found that the post-revolutionary period brought even greater problems. How do you actually live and practice democracy in the wake of war and the shadow of a recent revolution? How do young Serbians attempt to translate the energy and excitement generated by wide scale mobilization into the slow work of building democratic institutions? Greenberg navigates through the ranks of student organizations as they transition their activism from the streets back into the halls of the university. In exploring the everyday practices of student activists—their triumphs and frustrations—After the Revolution argues that disappointment is not a failure of democracy but a fundamental feature of how people live and practice it. This fascinating book develops a critical vocabulary for the social life of disappointment with the aim of helping citizens, scholars, and policymakers worldwide escape the trap of framing new democracies as doomed to failure.

Jessica Greenberg is Assistant Professor of Anthropology at the University of Illinois, Urbana-Champaign.

"At a time when manifestos on the politics of hope abound, it is precisely through such historicization that Greenberg's book constitutes an important intervention beyond the study of Serbia, too . . . Greenberg's sophisticated book offers ethnographically informed food for thought on the politics of disappointment, and therefore of hope, today. This is political anthropology at its best."

"[After the Revolution is] a very welcome and methodologically distinct repositioning in the field of transition studies. Students and scholars of democracy will therefore find [it] stimulating. [It is] equally exemplary for the comprehensive interrogation of the analytical preoccupation with democratic institutions and procedures to the detriment of citizen practice."

"The forms of agency created from the politics of disappointment discussed in After the Revolution are directly relevant for thinking about politics in the former Yugoslavia and postsocialist Eastern Europe, as well as about other groups and actors that are regularly faced with political disillusionment. The imminent disappointments of democratic forms of rule should not lead us to abandon 'the possibility of practicing or analyzing politics, only the investment in the stability of political meaning'. In this way, After the Revolution suggests that disappointment may give rise to the politics of practical hope."

"After the Revolution is an excellent, articulate book that presents a detailed and lively historical and ethnographic analysis of the forms of political engagement that followed the Serbian revolution . . . [I]ts trenchant, illuminating analysis of the everyday semiotic categories of time, space, and praxis underlying revolutionary and postrevolutionary politics will also have broad and lasting relevance to scholars and students in many disciplines and areas."

"After the Revolution: Youth, Democracy, and the Politics of Disappointment in Serbia offers rare insight from an anthropological perspective into life in Serbia following the end in 2000 of Slobodan Milošević's rule for more than a decade . . . These . . . compelling glimpses into political life in higher educational institutions in Serbia are a testament to the anthropologist's ability to accumulate valuable knowledge through long-term participant-observation and proficiency in the local language."

"The book captures uncertainties, complexities, and contradictions of youth activism and democracy building. It contributes to our understanding of youth activism, citizenship, political participation, and democracy by expanding these concepts to entail temporal, spatial, affective, performative, and ethical dimensions . . . Greenberg's powerful arguments about political transformations and thorough analysis of everyday technologies of democracy building are an important contribution to the anthropology of global politics. After the Revolution is a good example of a theoretical endeavor, which transcends common analytics prevalent in scholarship on a post-Cold War Europe for several decades."

"In this fascinating and important new book, Jessica Greenberg makes a significant contribution to the anthropology of politics. Focusing on the dilemmas faced by political activists in the aftermath of revolutionary change, she deftly weaves together issues of temporality, youth, affect, and democracy. After the Revolution will be of great interest to scholars in multiple fields of study."

"This insightful book describes in great ethnographic detail the challenging process of constructing democracy in today's post-violence Serbia, when earlier revolutionary dreams and utopian expectations have been long abandoned. In this context youth-based political activism is full of contradictions and disappointments and its outcome is not guaranteed. However, the messiness and uncertainty of this practice, Jessica Greenberg convincingly shows, are signs not of democracy's failure, but of its real promise. The powerful thesis of this book is of great importance for our understanding of the contemporary tensions of democracy everywhere—not only in the former Yugoslavia and other post-communist states, but also in the 'democratic world' itself."

"Greenberg situates her insightful and well-written ethnography in the aftermath of Milošević's toppling....By showing how neoliberal practices offered an appealing set of solutions to the social constraints in which activists found themselves, Greenberg's book overcomes one of the most common shortcomings of critical studies of neoliberalism....This nuanced attention to the local dynamics of neoliberal reform does not mean that After the Revolution is primarily of interest only to those seeking to understand the former Yugoslavia....Greenberg is able to defamiliarize the ways that democratic standing, representativeness, expertise, procedure, and political disinterest are socially produced and deployed, therefore opening them to fresh analysis and theorization." 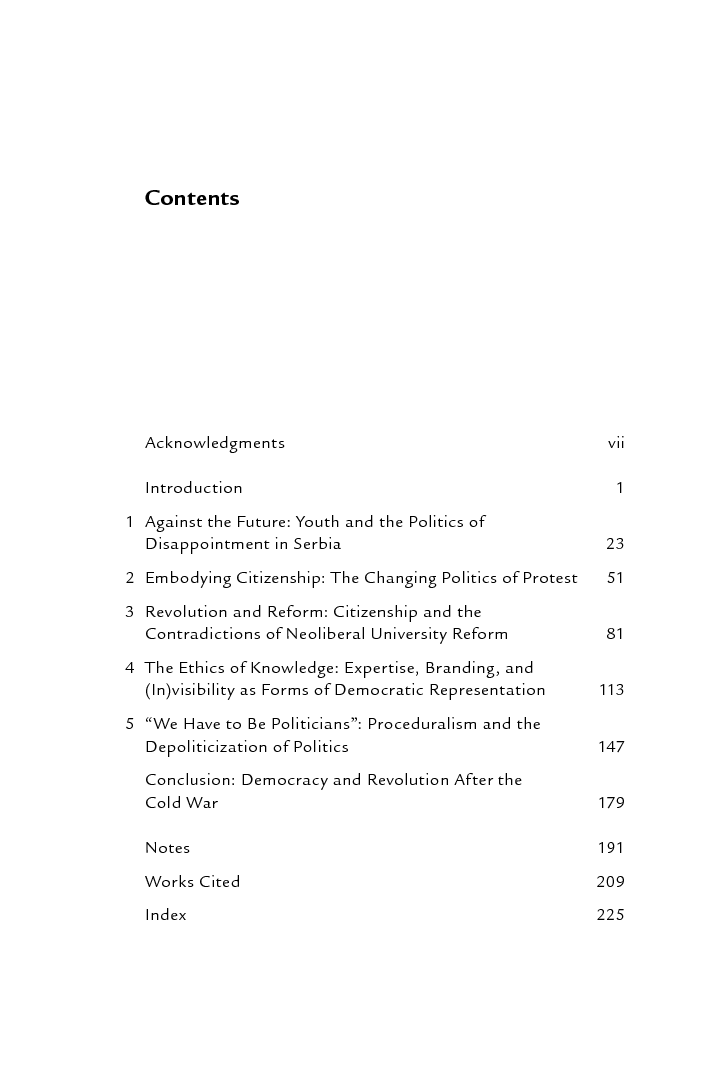 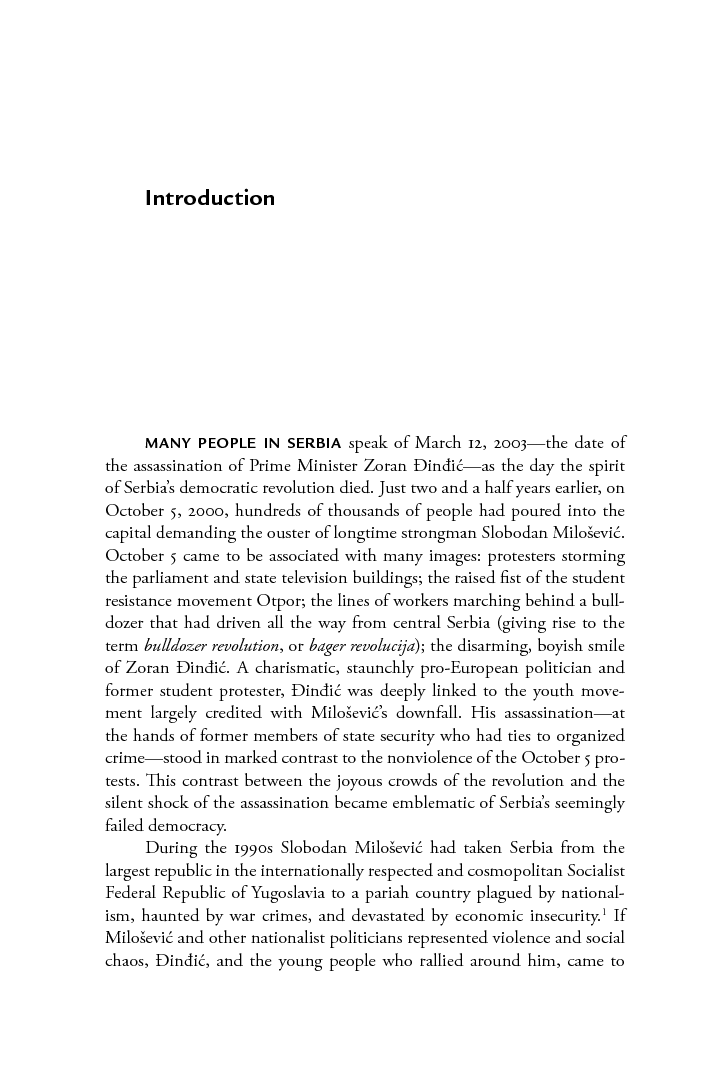 #Review: After the Revolution: Youth, Democracy, and the Politics of Disappointment

Allegra Lab
After the Revolution: Youth, Democracy, and the Politics of Disappointment in Serbia