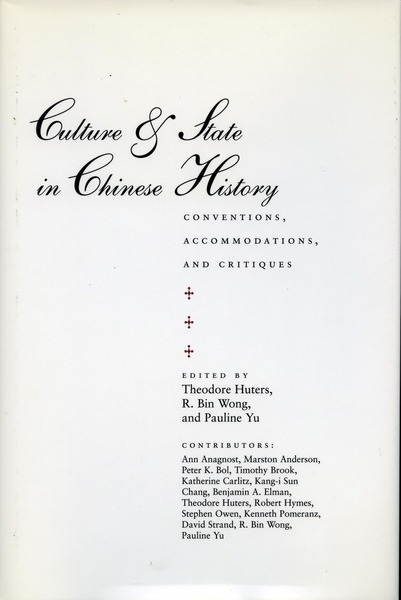 Many observers of late imperial China have noted the relatively small size of the state in comparison to the geographic size and large population of China and have advanced various theories to account for the ability of the state to maintain itself in power. One of the more enduring explanations has been that the Chinese state, despite its limited material capacities, possessed strong ideological powers and was able to influence cultural norms in ways that elicited allegiance and responded to the desire for order.

The fourteen papers in this volume re-examine the assumptions of how state power functioned, particularly the assumption of a sharp divide between state and society. The general conclusion is that the state was only one actor—albeit a powerful one—in a culture that elites and commoners could shape, either in cooperation with the state or in competition with it. The temporal range of the papers extends from the twelfth to the twentieth century, though most of the papers deal with the Ming and Qing dynasties.

The book is in four parts. Part I deals with philosophical, historiographical, and literary debates and their relation to the late imperial state; Part II with the multiple roles of officials, elites, specialists, and commoners in constructing norms of religious beliefs and practices. Part III presents criticisms by late imperial intellectuals of both state policies and social conventions, and examines official efforts to incorporate and utilize elite commitments to Confucian views of political and cultural order. Part IV discusses ways in which the twentieth-century Chinese political order emerged from a trajectory defined in part by the intersection of late imperial practices with Western categories of knowledge.