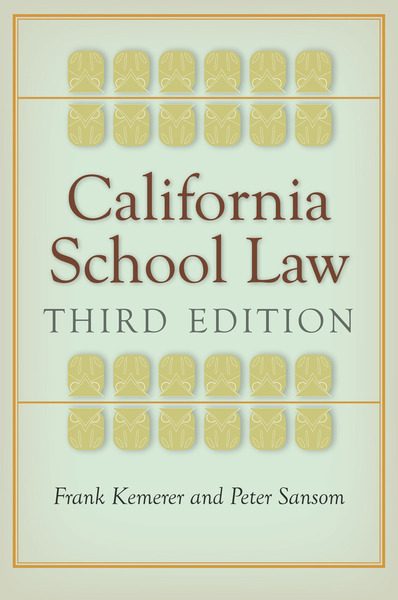 Note: the last cumulative update the authors provided to this text is January 2018. Download this update here.

Now in its third edition, California School Law is the only comprehensive source discussing how federal and state law affects the day-to-day operation of the state's traditional public, charter, and private schools. While the book is comprehensive, the authors have written it for a broad audience. California School Law has become a coveted desk-top reference for administrators, governing board members, school attorneys, union leaders, and policymakers. It also has been widely adopted as a classroom textbook in educational administration and education law classes.

The first chapter provides an explanation of the legal framework within which California schooling takes place and key players at the state, district, and school level. Ensuing chapters examine student attendance and truancy, curriculum law, employment law, teacher and student rights of expression, the school and religion, students with disabilities, student discipline, privacy and search and seizure, and legal liability in both state and federal court.

Also included are chapters on unions and collective bargaining, educational finance issues, and racial and gender discrimination. Appendices provide a glossary of legal terminology, an explanation of how to find and read legislative enactments and judicial decisions, and a list of sources for accessing law. The book's table of contents is included on this website.

Law never stands still. To keep current with changing legal precedent, the authors maintain a cumulative update for the third edition at www.californiaschoollaw.org.

Frank Kemerer teaches education law at the University of San Diego as a Professor-in-Residence. He has been researching and teaching education law for over thirty-five years at universities in New York, Texas, and California. Included among his books are the legal text Constitutional Rights and Student Life (West Publishing Company 1979), School Choice and Social Controversy (Brookings Institution Press 1999), School Choice Tradeoffs (University of Texas Press 2002), and The Educators' Guide to Texas School Law (University of Texas Press 2010, seventh edition). Professor Kemerer received his Ph.D. in educational administration and policy analysis from Stanford University with a law minor from Stanford Law School in 1975. He also received his AB and MA from Stanford and served as a researcher at the Center for Educational Research at Stanford.

Peter Sansom is a partner with Sansom Willis Arrowsmith LLP, an education law firm in California. His primary area of practice is representing school districts regarding issues under Section 504 of the Rehabilitation Act and the Individuals with Disabilities Education Act. He has successfully represented school districts in administrative due process hearings, federal district courts, and before the United States Court of Appeals for the Ninth Circuit. He stresses preventive legal advice and is a frequent presenter on a wide range of topics relevant to special education law. He also has authored articles on student discipline and a publication regarding the California Tort Claims Act. He received his law degree from the University of San Diego.

PRAISE FOR THE FIRST EDITION

"I would recommend this book to every educator and policymaker in public education. It is a great reference for immediate and comprehensive information on a variety of laws that govern California education."

"California School Law is a new and different contribution to the California policy scene. The writing is a blend of law and policy that is easy to follow."

—Michael Kirst, Professor of Education, Emeritus, Stanford University, President of the California State Board of Education during Governor Jerry Brown's terms in office

"Finally, this is the comprehensive, thoughtful, and lucid treatment of California educational law and policy we've been waiting for. The authors not only explain the complex world of California school law with a lawyer's precision, but they make this sometimes arcane topic both lively and compelling with rich examples and from a national perspective." 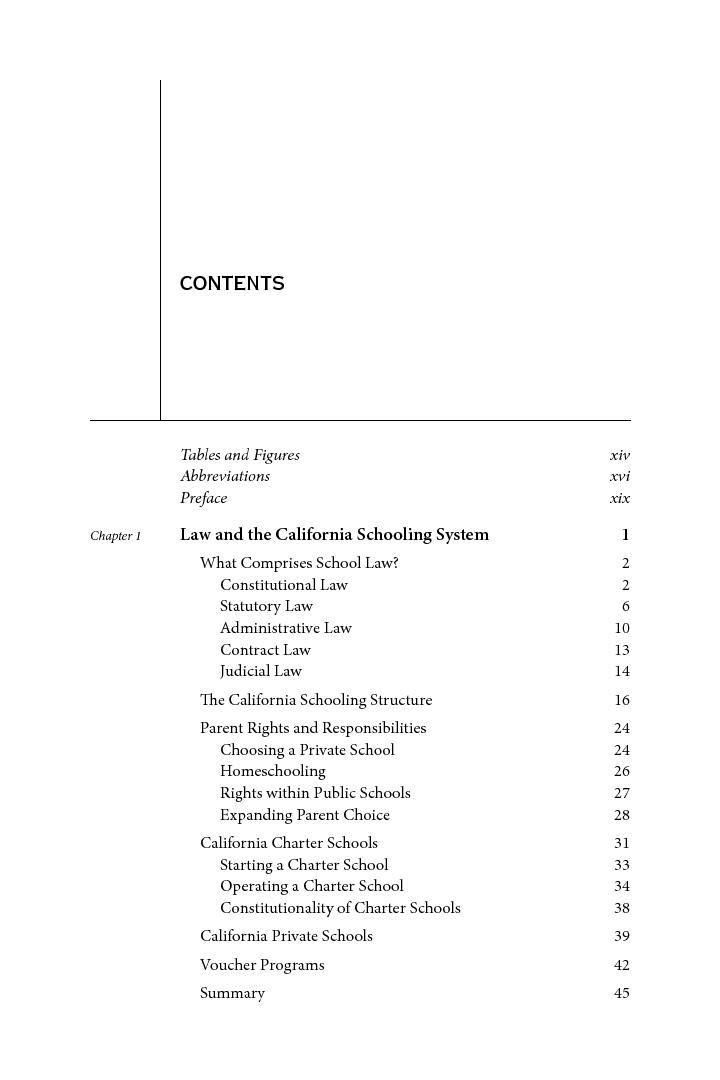 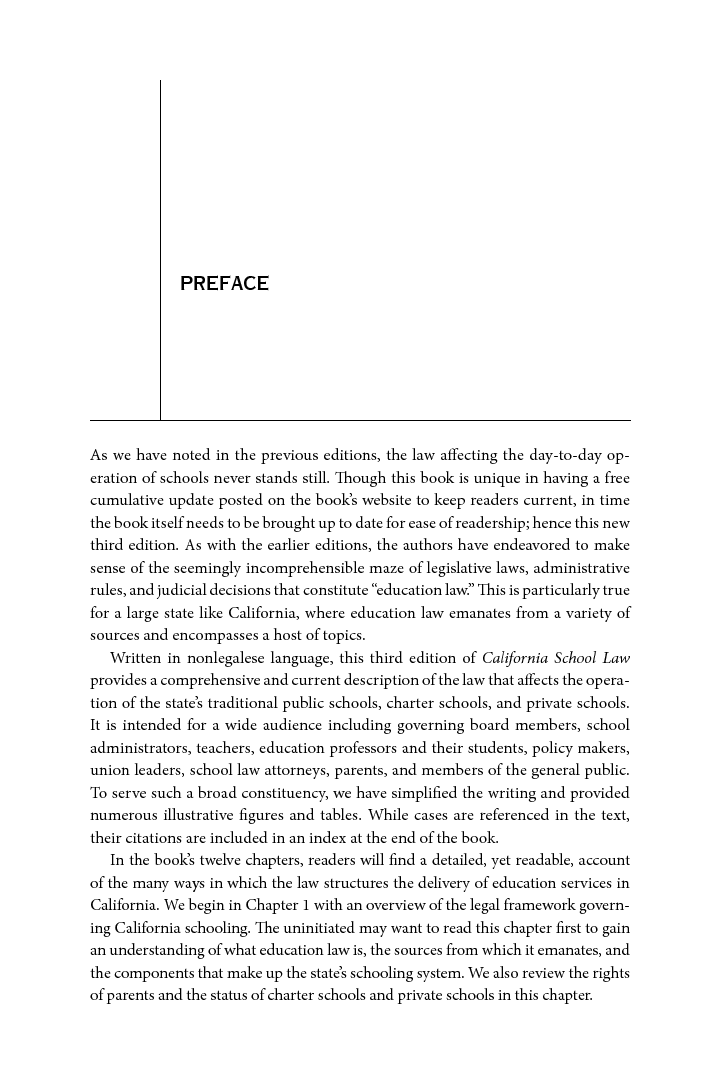 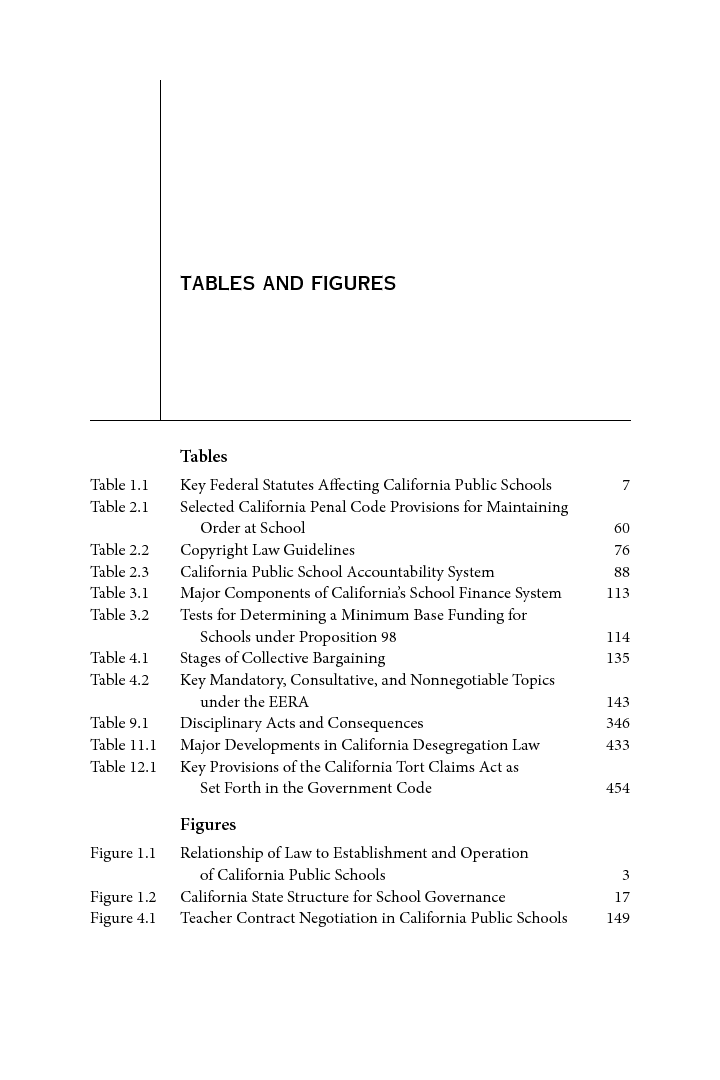