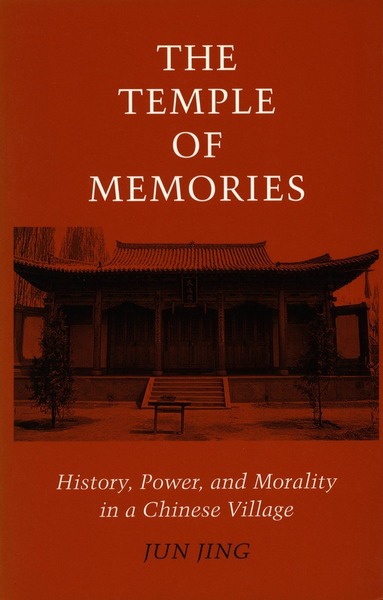 The Temple of Memories
History, Power, and Morality in a Chinese Village
Jun Jing

This study focuses on the politics of memory in the village of Dachuan in northwest China, in which 85 percent of the villagers are surnamed Kong and believe themselves to be descendants of Confucius. It recounts both how this proud community was subjected to intense suffering during the Maoist era, culminating in its forcible resettlement in December 1960 to make way for the construction of a major hydroelectric dam, and how the village eventually sought recovery through the commemoration of that suffering and the revival of a redefined religion.

Before 1949, the Kongs had dominated their area because of their political influence, wealth, and, above all, their identification with Confucius, whose precepts underlay so much of the Chinese ethical and political tradition. After the Communists came to power in 1949, these people, as a literal embodiment of the Confucian heritage, became prime targets for Maoist political campaigns attacking the traditional order, from land reform to the “Criticize Confucius” movement. Many villagers were arrested, three were beheaded, and others died in labor camps. When the villagers were forced to hastily abandon their homes and the village temple, they had time to disinter only the bones of their closest family members; the tombs of earlier generations were destroyed by construction workers for the dam.

Jun Jing is Assistant Professor of Anthropology at the City University of New York.

"One of the best local ethnographies to date on post-reform China. . . . Conceptually sophisticated yet undiminished by unnecessary jargon, the book provides one of the most readable and intelligently framed accounts of change and continuity at the local level in China."

"Anthropologists and historians will find themselves rewarded by this nuanced examination of social memory, ritual life, and the traumatic recent history of a remarkable village."

"This gem of a book takes the study of Chinese village culture to new levels of theoretical sophistication, ethnographic nuance and literary evocativeness. . . . There are many fine books that tell similar stories of the devastation of rural communities during the Maoist era. Dachuan is different only in that the depth of its tragedy was several degrees worse than most. But what makes Jun Jing's book unique is his discovery of a way to probe the meaning of such a history for the villagers."

"All audiences can enjoy the universal subjects of the book—children and food. . . . Feeding China's Little Emperor's is useful both for anthropologists or those looking at social change over the last few decades."

"In 1961 the entire village of Dachuan was destroyed when it was submerged under a reservoir created by a newly constructed hydroelectric dam. . . . In Jun Jing's beautifully written account, The Temple of Memories, he reveals how the villagers transcended the all-too-common aspects of their suffering and resourcefully reconstructed their village and their history."