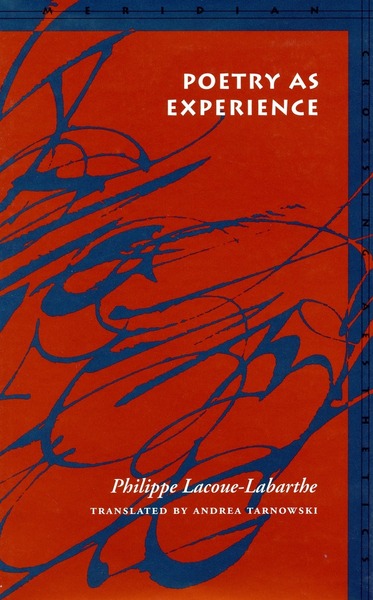 Lacoue-Labarthe's Poetry as Experience addresses the question of a lyric language that would not be the expression of subjectivity. In his analysis of the historical position of Paul Celan's poetry, Lacoue-Labarthe defines the subject as the principle that founds, organizes, and secures both cognition and action—a principle that turned, most violently during the twentieth century, into a figure not only of domination but of the extermination of everything other than itself. This thoroughly universal, abstract, and finally suicidal subject eradicates all experience, save the singularity of this experience of voiding. But what is left, as Paul Celan insisted, is a remainder to the lyric voice alone: Singbarer Rest.

Lacoue-Labarthe's detailed analyses of two decisive poems by Celan, "Tübingen, Jänner" and "Todtnauberg"—the one a response to Hölderlin, the other to Heidegger—and his sustained reading of "The Meridian" present Celan's verse of singularity as the movement at and beyond the border of generalizable experience, i.e., as an experience, a traversing of a dangerous field, in which language no longer dominates anything, but rather commemorates the voiding of concepts and the collapse of the constitutive powers of the subject. For Lacoue-Labarthe, poetry after the Shoah, the poetry of bared singularity, is no longer a poetry that would correspond to the concept of the subject—or, for that matter, to the concept of poetry—but is rather the language of the decept. Only by being disappointed of the heroic language of idealistic poetry, and of the mytho-ontological tendencies of philosophy, can Celan's poetry keep open the possibility of another history, another future.

Philippe Lacoue-Labarthe—philosopher, literary critic, and translator—is one of the leading intellectuals in France. He teaches philosophy and aesthetics at the University of Strasbourg. Among his works translated into English is Typography: Mimesis, Philosophy, Politics (Stanford paperback edition, 1998).