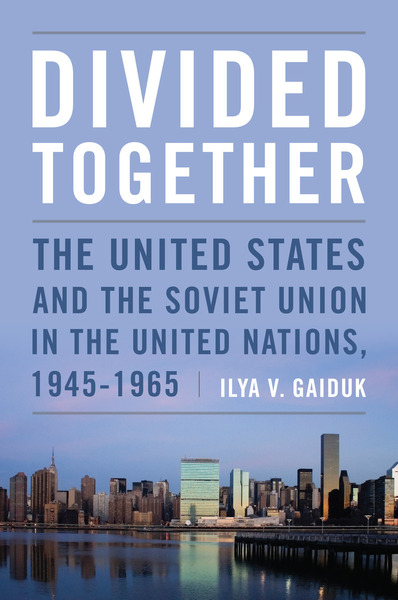 Divided Together studies US and Soviet policy toward the United Nations during the first two decades of the Cold War. It sheds new light on a series of key episodes, beginning with the prehistory of the UN, an institution that aimed to keep the Cold War cold.

Gaiduk employs previously secret Soviet files on UN policy, greatly expanding the evidentiary basis for studying the world organization. His analysis of Soviet and US tactics and behavior, covering a series of international controversies over security and crisis resolution, reveals how the rivals tried to use the UN to gain leverage over each other during the institution's critical early years.

Ilya V. Gaiduk, who died in 2011 during the completion of this book, was a Senior Research Fellow, Institute of World History, Russian Academy of Sciences, Moscow. He had been a Fellow at the Woodrow Wilson Center in 2005-6. He was also the author of Confronting Vietnam: Soviet Policy toward the Indochina Conflict, 1954-1963, which was published in 2003 in the Cold War International History Project series.

"[T]his academic monograph is a must-read for anyone who teaches or writes about the early Cold War or the United Nations. It could be equally valuable to a classroom audience, since he clearly identifies areas of historiographical contention and differing interpretations throughout the text and then systematically lays out the rationale behind his own conclusions . . . Given the stellar contribution of this book to our understanding of the United Nations and the early Cold War, this reviewer can only join in the lament of series editor James G. Hershberg that Gaiduk will not be able to write the sequel to this valuable volume."

"This book by the late Russian historian Ilya Gaiduk is truly a groundbreaking work . . . This is an elegantly written book, with an ironic sense of humor and balanced analysis. Any scholar interested in the Cold War would benefit greatly from reading Gaiduk's meticulously researched study. The book is a pleasure to read, which makes it especially useful as a text for both undergraduates and graduate students."

"Gaiduk, former research fellow at the Institute of World History in Moscow who died unexpectedly in 2011, wrote an interesting history of US-Soviet relations in the UN from 1945 to 1965 . . . Recommended."

"Specialists on Soviet-American relations and international relations more generally will find it enhances and refines their understanding of US and Soviet policies toward the United Nations."

"This volume picks up on familiar threads synthesizes them, embellishes them with excellent materials from Soviet sources, and presents them clearly."

"Gaiduk's research into the off-limits Soviet archives represents an original contribution to a better understanding of US-Soviet tensions at the UN."