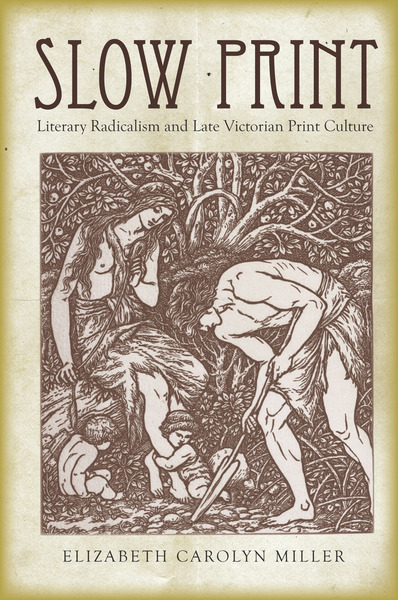 Winner of the 2014 NAVSA Best Book of the Year Award, sponsored by the North American Victorian Studies Association.

This book explores the literary culture of Britain's radical press from 1880 to 1910, a time that saw a flourishing of radical political activity as well as the emergence of a mass print industry. While Enlightenment radicals and their heirs had seen free print as an agent of revolutionary transformation, socialist, anarchist and other radicals of this later period suspected that a mass public could not exist outside the capitalist system. In response, they purposely reduced the scale of print by appealing to a small, counter-cultural audience. "Slow print," like "slow food" today, actively resisted industrial production and the commercialization of new domains of life.

Drawing on under-studied periodicals and archives, this book uncovers a largely forgotten literary-political context. It looks at the extensive debate within the radical press over how to situate radical values within an evolving media ecology, debates that engaged some of the most famous writers of the era (William Morris and George Bernard Shaw), a host of lesser-known figures (theosophical socialist and birth control reformer Annie Besant, gay rights pioneer Edward Carpenter, and proto-modernist editor Alfred Orage), and countless anonymous others.

Elizabeth Carolyn Miller is Professor of English at the University of California, Davis.

"Slow Print is one of a rare species: a study that manages to encompass the whole breadth and depth of late Victorian radical culture . . . There are few books currently in print that demonstrate as firm a mastery of both the historical and the literary aspects of that culture that draw on such a wide range of primary print sources, or that so deftly situate the well-trodden solitary peaks of literary studies . . . in the vast and dense forest of their historiographical contexts . . . This book will prove as useful and revelatory to a labor historian as to a book historian, to a student of Modernist aesthetics as to one of socialist politics."

"Slow Print is a brilliant phrase on Miller's part, drawing together as it does not only a new sense of urgency in response to accelerated capitalist production at the end of the nineteenth century but also our own period's response to the heightened acceleration wrought by new digital technologies and captured, for us, in antidotes like the 'slow food' movement and 'slow living' . . . In a single term Miller collapses two periods and helps us to understand both better."

"Social historians have long known that early Victorian radicals saw a free press and mass literacy as preconditions for political progress. Literary historians have long identified early twentieth century 'little magazines' as a driver of modernist aesthetics. Elizabeth Miller is the first scholar to succeed in connecting those dots. . . Many of the pleasures of reading Slow Print lie in its details."

"Slow Print elegantly blends a focused examination of a period in literary history and literary politics with actual readings of some of the literature, and occasionally some exciting and detailed attention to language, figurae, and meaning. The illustrations included in this book also helped me to understand and to respect the ethical, political, economic, and aesthetic challenges of the radical press movement, and made the story rich, imaginable, and relevant for our own fast-print, hurried-media age."

"Miller's archive of texts is fascinating and provocative as well as fresh."

"[T]he virtue of Miller's book is its focus on the largely forgotten context of socialist print culture from which William Morris and other familiar writers such as George Bernard Shaw emerged . . . The thirty-plus illustrations in Slow Print are extremely valuable . . . Students of nineteenth-century periodicals will no doubt use this book selectively, while those with a particular interest in socialism will find much new information and many leads for further investigation."

"[Miller's book has] the potential to reshape out understanding of what kinds of alternative polities could be brought to life within a print-dominated realm . . . [Slow Print tells] a new story about the countercultural experiments that radicals undertook by exploiting wrinkles, peculiar and often transient vectors of flow within a variegated public realm."

"Miller discusses the proliferation of literary radicalism during the late stages of the Victoria era. Highlighting both luminaries such as William Morris and George Bernard Shaw and less familiar figures, the author thoughtfully underscores the somewhat surprising antipathy displayed toward print culture by radical writers, editors, and publishers of the day . . . Recommended."

"This is an original and valuable piece of scholarship, accessibly and vibrantly written. Its argument for 'slow print', which is supported by excellent close readings of the material dimensions of the texts it discusses, as well as aspects of their literary character, is a highly convincing one."

"Slow Print builds carefully on several generations of scholarship in the field—but pushes the scholarly conversation forward in important and new directions through its archival findings and synthetic analysis. This is a sit-up-and-take-notice, must-read book in Victorian and modernist studies."

"[B]eautifully written, richly detailed, and [an] impressively learned book . . . Miller not only brilliantly illuminates the revolutionary principles that infused Victorian slow print but also shows how this reading helps to qualify anti-modernist critique."

"Elizabeth Carolyn Miller's monograph treats late Victorian literary radicalism, a relatively neglected area, with an inventive paradigm on anticapitalist or 'slow' print culture . . . Miller's archive of texts is fascinating and provocative as well as fresh, and hopefully she will not be the only scholar to mine its riches."

"Miller takes advantage of the capaciousness of print culture as a category . . . 'Slow print' is a brilliant phrase on Miller's part, drawing together as it does not only a new sense of urgency in response to accelerated capitalist production at the end of the nineteenth century but also our own periods' response to the heightened acceleration wrought by new digital technologies . . . In a single term, Miller collapses two period and helps us to understand both better." 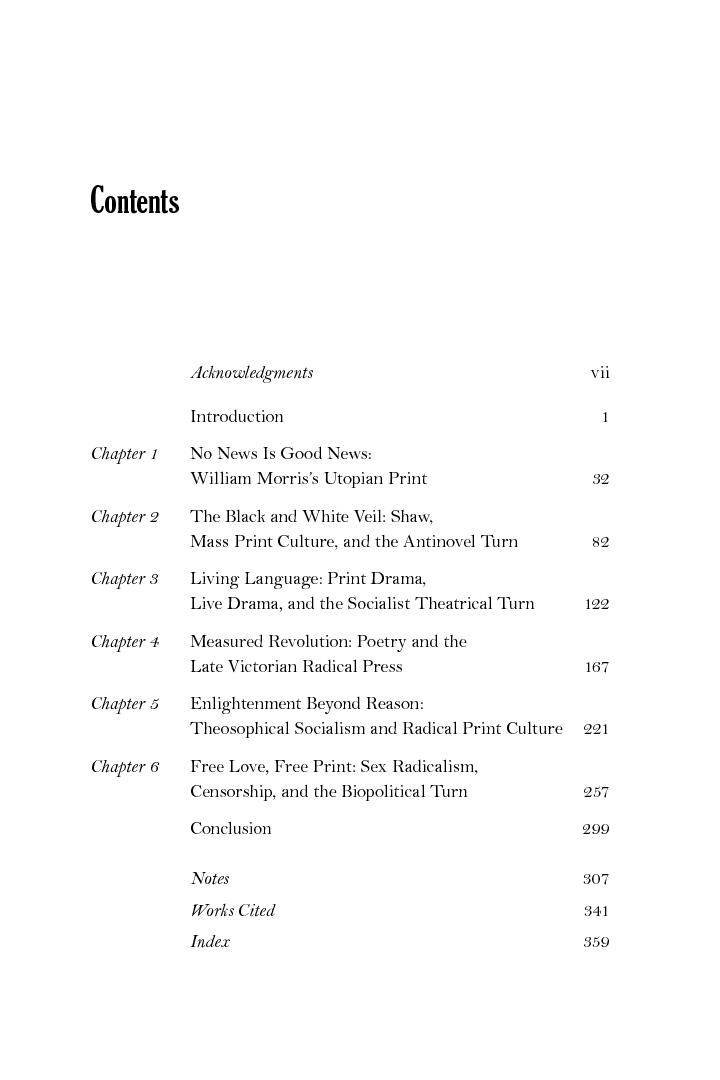 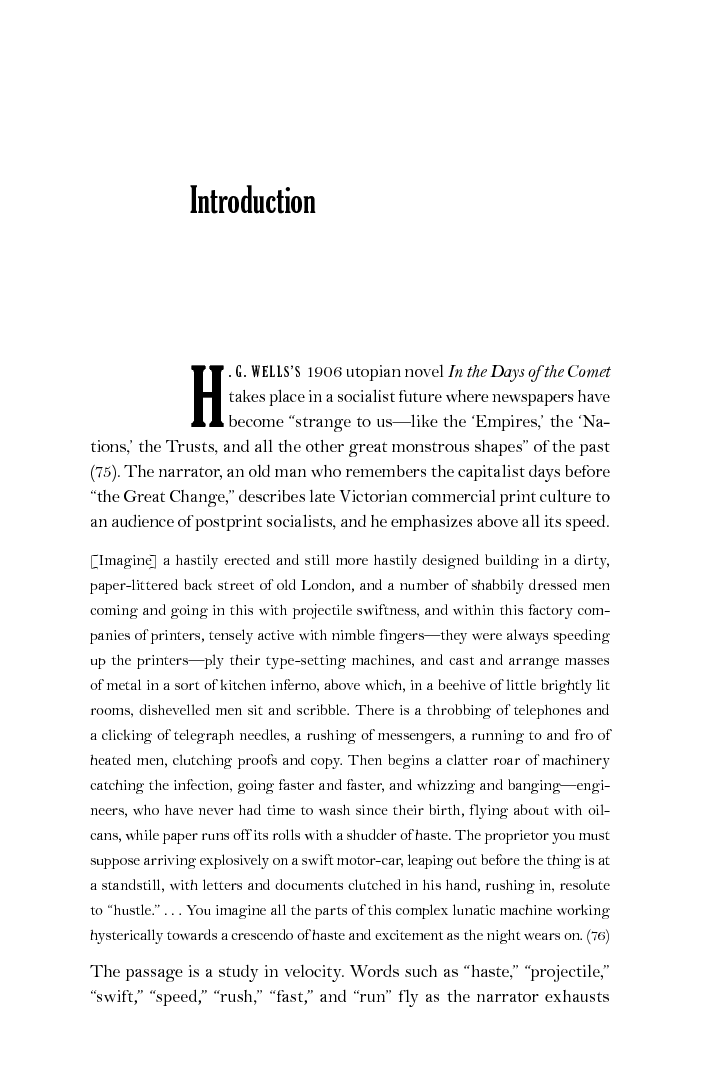