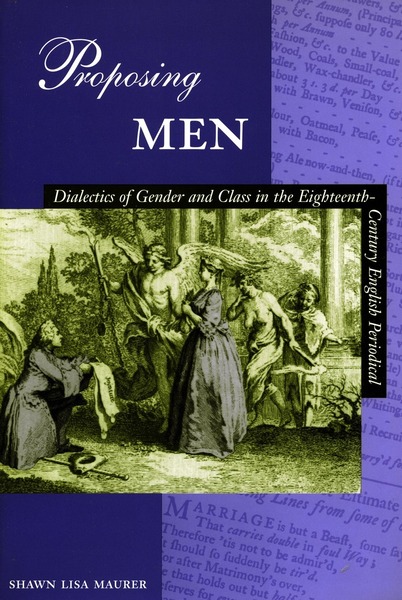 Simultaneously challenging conventional male-dominated thought and revisionist modern feminism, this book argues that gendered identities can best be conceived relationally, and thus that a fuller understanding of gender roles in the eighteenth century (and by extension in our own) must include an analysis of men’s place in the discourse of domesticity.

Examining the phenomenal rise of the social periodical at the end of the seventeenth century, the author theorizes the genre’s crucial contribution to the construction of a class-specific gender identity that succeeds as ideology not, as usually assumed, by separating the feminine private sphere from the masculine public one, but by delineating the private as an important locus of masculine control.

Marshalling social history, political theory, economics, and sociology in an attempt to account historically for the appearance of the sentimental family—controlled by the man who is at once lover and husband, father and brother—this book forcefully questions the validity of the doctrine of separate spheres and the ascription of gender roles connected to it.

The social periodical provides compelling evidence for understanding the relationship between gender construction and class values. By focusing on such topics as courtship, marriage, and parent-child relations, the genre configured the nuclear family as a locus where emotional and sexual gratification supported material gain. Periodical literature offered an ostensibly neutral forum for public debate about private issues where male editors, by instructing and reforming women, also learned to become the chaste husbands and watchful fathers of the bourgeois home.

In the process of demonstrating how social periodicals constructed new forms of masculine control still very much with us today, the book also shows how, by galvanizing an important new reading class, they contributed to the rise of the novel. Periodical literature exerted a transformative effect on English society by displaying a moral and cultural authority, not to mention a readership, that novels would struggle for many decades to achieve.

Shawn Lisa Maurer is an independent scholar who has taught at Texas A & M University. She is the editor of a critical edition of Nature and Art by Elizabeth Inchbald.

—The Age of Johnson