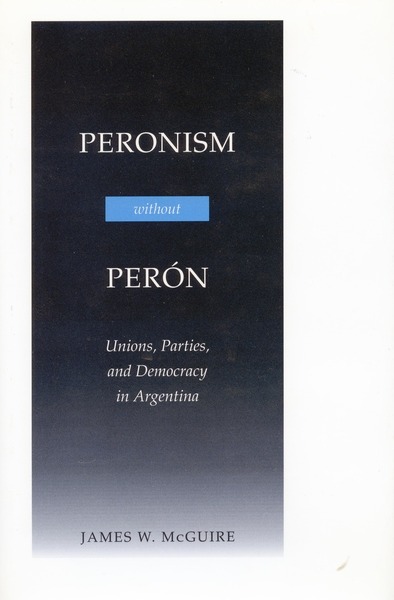 Peronism, the Argentine political movement created by Juan Perón in the 1940's, has revolved since its inception around a personalistic leader, a set of powerful trade unions, and a weakly institutionalized political party. This book examines why Peronism continued to be weakly institutionalized as a party after Perón was overthrown in 1955 and argues that this weakness has impeded the consolidation of Argentine democracy.

Within an analysis of Peronism from 1943 to 1995, the author pays special attention to the 1962-66 and 1984-88 periods, when some Peronist politicians and union leaders tried, but failed, to strengthen the party structure. By identifying the forces that led to these efforts of party-building and by analyzing the counterforces that thwarted them, he shows how these failures have shaped Argentina's experience with democracy.

Drawing on this interpretation of Peronism and its place in Argentine politics, the book develops a distributive conflict/political party explanation for Argentina's democratic instability and contrasts it to alternatives that stress economic dependency, populist economic policies, political culture, and military interventionism.

"McGuire makes a significant, original contribution to the scholarly literature on parties, unions, and the dilemmas of democratic consolidation in Argentina. The book is certain to become the standard work on the Peronist movement and one of a handful of obligatory references for the study of contemporary Argentine politics. Its importance is not limited to the study of Argentina, however: this superb piece of scholarship is also very relevant to other Latin American countries and other regions."

"McGuire puts forth a compelling explanation in promoting democratic governance. He argues that the personalistic policies of both Juan Perón and now of President Carlos Menem have undermined attempts at building a strong political party system within which democratic procedures and norms could emerge."