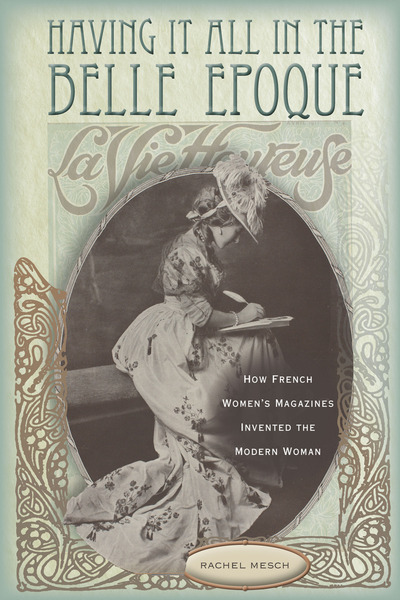 At once deeply historical and surprisingly timely, Having it All in the Belle Epoque shows how the debates that continue to captivate high-achieving women in America and Europe can be traced back to the early 1900s in France. The first two photographic magazines aimed at women, Femina and La Vie Heureuse created a female role model who could balance age-old convention with new equalities. Often referred to simply as the "modern woman," this captivating figure embodied the hopes and dreams as well as the most pressing internal conflicts of large numbers of French women during what was a period of profound change. Full of never-before-studied images of the modern French woman in action, Having it All shows how these early magazines exploited new photographic technologies, artistic currents, and literary trends to create a powerful model of French femininity, one that has exerted a lasting influence on French expression.

This book introduces and explores the concept of Belle Epoque literary feminism, a product of the elite milieu from which the magazines emerged. Defined by its refusal of political engagement, this feminism was nevertheless preoccupied with expanding women's roles, as it worked to construct a collective fantasy of female achievement. Through an astute blend of historical research, literary criticism, and visual analysis, Mesch's study of women's magazines and the popular writers associated with them offers an original window onto a bygone era that can serve as a framework for ongoing debates about feminism, femininity, and work-life tensions.

Rachel Mesch is Associate Professor of French at Yeshiva University. She is the author of The Hysteric's Revenge: French Women Writers at the Fin de Siècle (2006).

"In Having It All in the Belle Epoque, Mesch sheds new light on the gender mores of 19th century Europe. As she warns, the modern woman becomes a 'bundle of contradictions' for whom 'there are no easy answers' . . . Mesch's study raises powerful new questions about the place of fashion periodicals in campaigns for women's equality."

"Mesch's study furthers understanding of Belle Époque women's literary culture by highlighting its role and reception in the print culture of the time . . . Mesch offers engaging intricate readings of the magazines' celebration of feminine, elegant, achieving women before she moves beyond their pages to consider both the magazines' relationship to the actual authors they promoted and their reception by the larger public . . . Mesch's concept of Belle Époque literary feminism opens a new perspective onto the matrix of Belle Époque women's magazines, popular women's fiction, and their female readers . . . Having It All is a well-researched, richly textured, and readable study built upon detailed, elegant readings of Belle Époque visual print culture. At the same time, it elucidates important and dynamic relations of journalism and female literary culture in the Belle Époque. Deftly bringing into play the multiple perspectives of literary, visual, and cultural studies, Mesch's romance with Femina and La Vie Heureuse constitutes a welcome contribution to French studies that will engage students and scholars of print media, women's history, gender studies, and French literary culture."

"Just how expertly Mesch navigates the 'contradictory ideological terrain' of Belle Époque literary feminism, where a self-declared feminist can call her partner 'master' if doing so might reconcile love, marriage, feminism, and femininity without requiring a choice between them cannot be over-emphasized . . . [S]he argues convincingly for the significance of the magazines' 'dreaming' and the momentous ideological shift it represents . . . Beautifully written and lavishly illustrated, Having It All is also remarkably timely: as the magazines beckoning from grocery check-out stands demonstrate, we still worship celebrities, just as we continue to debate whether women can be both 'feminine' and 'feminist' and to strive for a work-life balance."

"Rachel Mesch's fascinating, lavishly illustrated study opens a window into the surprising world of the Belle Époque French women's magazines that, in the dozen or so years preceding the Great War, tackled questions still at the heart of debates over women's place in society today: how to reconcile femininity and feminism, life and work, conventional expectations and new opportunities . . . Having It All takes us on a remarkable journey into lost time, worthwhile both in itself and for the insights it offers into issues that continue to preoccupy us today."

"Asking the question 'Did women have a Belle Epoque?' Having It All in the Belle Epoque is a study that explores some of the early twentieth-century history of concerns and debates that remain extremely relevant to women's lives into the twenty-first century. Readers will find in this book a rich archive that illuminates the history of women readers and writers before World War I while offering a longer-term perspective on the ways we think about the complexities of femininity and feminism (and their relationships to one another) up to the present day."

"Few academic books have given rise to blogs (Plus ça change) and articles published by Slate.com ("Having It All. In France. 100 Years ago."). These online publications are a testament both to Rachel Mesch's lively, jargon-free prose and the surprising lessons in her wonderful new study that are applicable even to our lives today . . . Mesch's engaging, entertaining study is a lovely addition to Belle Époque, feminist, and media studies. Her scholarship demonstrates her talents as a close reader of texts and images and a great synthesizer of cultural events."

"Offering a refreshing new vision of late-19th-century feminism, Mesch presents a compelling reinterpretation of two fin-de-siècle women's magazines . . . Mesch's book helps one view these women's magazines in the context of their time and understand the feminist message they embodied for their readers . . . Highly recommended."

"[W]ith its rich array of reproduced pages to illustrate points, and nice attention to the magazines' visual as well as verbal discourse, this is a highly readable, enjoyable book that adds an important dimension to the study of how the vibrant feminist contestation of those years was mediated for and experienced by the majority of women."

"Through brilliantly constructed close readings of word and image in these magazines, Mesch brings to light a much more complicated picture of debates by and on women at the turn of the nineteenth century . . . Many of the journalists used by, and writers depicted in, these magazines had literary ambitions. Indeed, one of the great virtues in having this material addressed by a scholar with a proper interest in cultural history, as well as securely anchored origins in the world of nineteenth-century French literary studies, is that she is able to identify novels of the period which addressed the issue of women's magazines . . . Not only does Mesch identify such key texts in the relationship between journalism and fiction, but she also brings to bear in the cultural history the kind of close textual analysis for which literary interpretation is the best preparation."

"In the search for work-life balance, readers will marvel at suggestions that date back 100 years."

"This book's unique angle of analysis, wealth of quotations from primary sources, and many illustrations make it both a viable teaching tool and a scholarly resource."

"Mesch illuminates both the context that produced the paradox of 'having it all' and the difficulties that arose as a result. Her book opens a window onto a distant and relatively unknown past, all the while shedding light on debates that are still very much alive today."

"For too long, we have tended to view the Belle Epoque through the prism of the feminism of our own day—how it measures up or falls short of current standards. By linking women's magazines of the time to novels, visual imagery, and cultural practices, Mesch breaks out of this straitjacket, offering the most insightful and thorough examination of that space to date."

"Having It All in the Bell Epoque provides a fine historical survey debating the history of high-achieving women and how the roots of these achievers can be traced back to early 1900s France. Two key photographic magazines for women created a female role model who embodied new freedoms and approaches for women, captivating large numbers of French women and setting the stage for a century of women's rights changes. This focus on these publications provides new images of this modern French figure, analyzes artistic and literary trends contributing to the rise of this culture, and blends history with literary and artistic insights throughout, making for a solid and specific pick for any women's studies collection."

"Having It All in the Belle Epoque is a splendidly rewarding and highly informative read. The book builds convincingly on Mary Louise Roberts's work on the New Woman, and Mesch's nuanced formulation of the femme moderne figure adds an interesting dimension to other important interdisciplinary scholarship on gender at the turn of the century...The prose is engaging and eloquent, and the volume's many high-quality illustrations facilitate Mesch's stellar readings of text and image together." 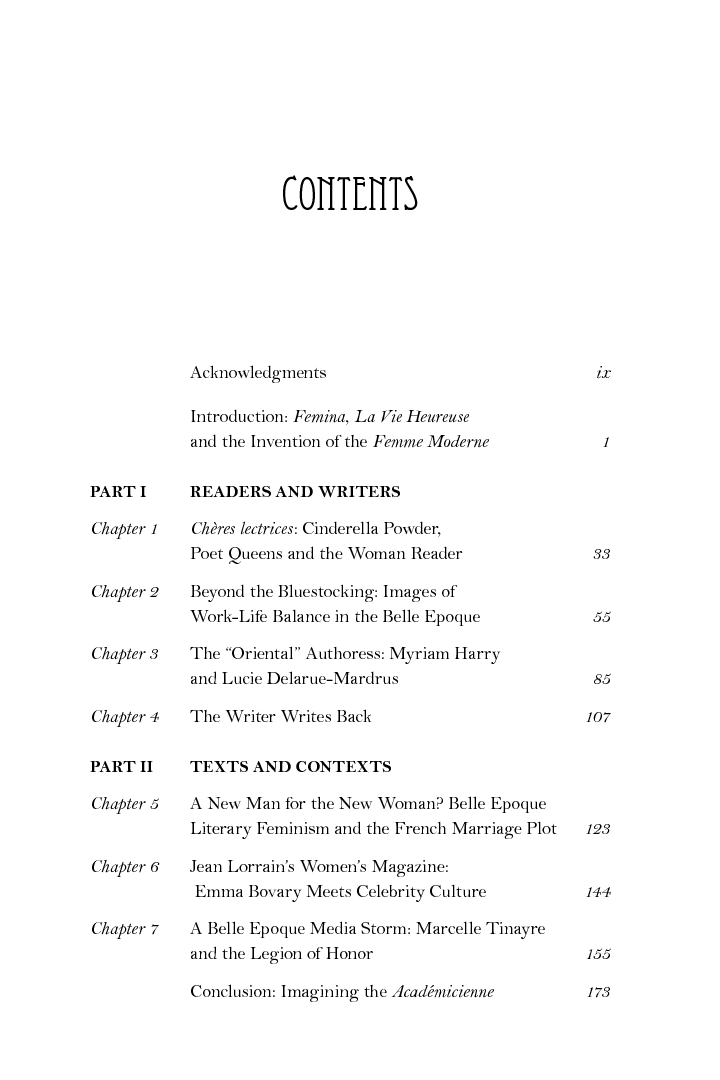 Having It All in the Belle Epoque by Rachel Mesch