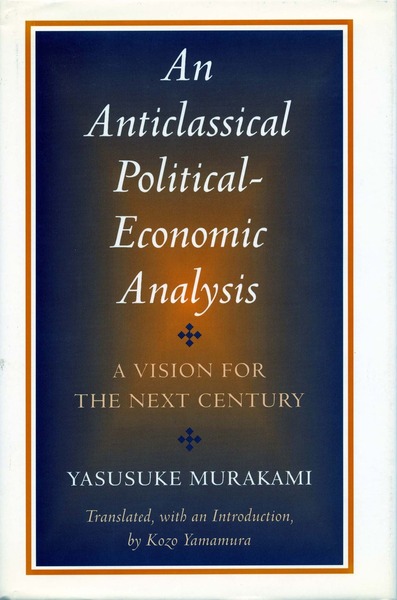 An Anticlassical Political-Economic Analysis
A Vision for the Next Century
Yasusuke Murakami Translated, with an Introduction, by Kozo Yamamura

In his final work, one that distills decades of research and thought, a distinguished economic thinker turned social scientist and philosopher confronts three crucial questions facing the world at the end of the century: How and in what form can a harmonious and stable post-cold war world order be created? How can the world maintain the economic performance necessary for the well-being of people while minimizing international economic conflicts and further deterioration of the world’s environment? What must be done to safeguard the freedoms of all peoples?

In attempting to answer these questions, Murakami criticizes classical political-economic analysis and offers his own “anticlassical” analyses and visions for the next century. By classical political-economic analysis, Murakami refers to analyses of power politics based on the nation-state system and to classical and neoclassical economic analysis which holds that unimpeded competition and free trade are fundamental bases for increasing wealth for the benefit of all. Murakami’s anticlassical stance takes the form of a new, intellectually integrated and reasoned concept called “polymorphic liberalism,” which argues that traditional “progressivism”—the belief that humans have an ultimate unique path on which they will reach an ideal social and political-economic system—can no longer meet today’s challenges.

At his death Yasusuke Murakami was director of the Center for Global Communications at the International University of Japan. Kozo Yamamura is the Job and Gertrud Tamaki Professor of Japanese Studies at the University of Washington.

"At last we have a translation of a major work explaining how the world looks from a Japanese perspective. . . . Murakami undertakes a thorough analysis of liberalism, the nation-state, national security, and East-West relations. His thinking is complex and subtle. . . . This book offers an important perspective from a major thinkers."