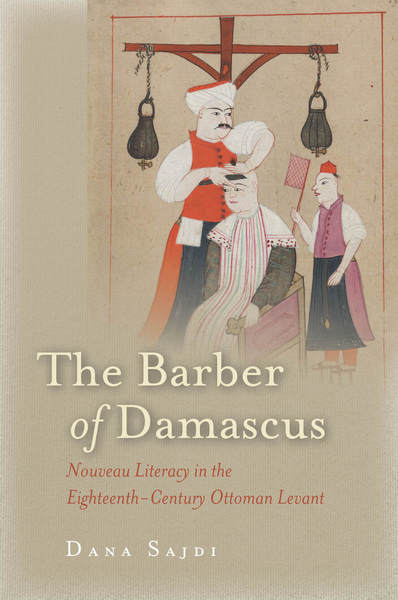 One of the 10 Best Books of 2013 reviewed by Critical Margins.

This book is about a barber, Shihab al-Din Ahmad Ibn Budayr, who shaved and coiffed, and probably circumcised and healed, in Damascus in the 18th century. The barber may have been a "nobody," but he wrote a history book, a record of the events that took place in his city during his lifetime. Dana Sajdi investigates the significance of this book, and in examining the life and work of Ibn Budayr, uncovers the emergence of a larger trend of history writing by unusual authors—people outside the learned establishment—and a new phenomenon: nouveau literacy.

The Barber of Damascus offers the first full-length microhistory of an individual commoner in Ottoman and Islamic history. Contributing to Ottoman popular history, Arabic historiography, and the little-studied cultural history of the 18th century Levant, the volume also examines the reception of the barber's book a century later to explore connections between the 18th and the late 19th centuries and illuminates new paths leading to the Nahda, the Arab Renaissance.

Dana Sajdi is Associate Professor of History at Boston College. She is the editor of Ottoman Tulips, Ottoman Coffee: Leisure and Lifestyle in the Eighteenth Century (2008) and coeditor of Transforming Loss into Beauty: Essays in Arabic Literature and Culture in Memory of Madga Al-Nowaihi (2008).

"The Barber of Damascus will no doubt contribute to a reevaluation of this literary legacy. Most of all, readers will appreciate the introduction to the social world of an ordinary barber . . . In fashioning this "working-class" biography, Sajdi's book is a real achievement, the first of its kind in so carefully exploring the cultural and literary universe of an ordinary artisan from the premodern Middle East."

"This wonderful book demonstrates how much studying the eighteenth century enables us as scholars to develop a world history that reflects the experiences of all across time and space . . . Scholars can only build a world history by escaping the temporal hold of the nineteenth century on the one hand and the spatial trap of Western European cities on the other. I think Sajdi's work is an excellent and very significant step in this direction."

"Sajdi has done a great service to Middle Eastern Studies by alerting researchers to the necessity of locating original copies of manuscripts and comparing them with the published texts. Her zeal in comparing passages and indicating discrepancies in Ibn Budayr's original and edited copies is amazing . . . Dana Sajdi is to be complimented for producing this impressive book which is a joy to read in its elegant style. It is an analytical case history, fully documented and thoroughly investigated, and constitutes a major contribution to Middle Eastern socio-cultural studies."

"Sajdi's discussion of Ibn Budayr as a commoner historian helps us to understand the long history of what she terms 'unusual authors' . . . There is much fascinating material in The Barber of Damascus for readers interested in the history of literary genres . . . Dana Sajdi is a talented scholar."

"In The Barber of Damascus, Dana Sajdi musters a treasure trove of empirical evidence and the tools of Arabic literary analysis to demonstrate how the 18th century serves as a pivot between the medieval and the modern . . . The importance of Sajdi's book lies beyond the manuscript of the barber. She has identified a new genre of history writing among a new breed of authors spread throughout Bilad al-Sham . . . Sajdi's most innovative contribution to the existing historiography of Ottoman Syria and Arabo-Islamic history writing is her scrupulous attention to the distinctive literary markers of these texts . . . The Barber of Damascus will hold its own as a work that enriches our understanding of the 18th century while also identifying key continuities between the periods that precede and follow it."

"Sajdi's is a serious work of scholarship that combines in-depth textual analysis demonstrated through the transliteration and translation of underlined rhyming couplets . . . Surely, Sajdi's masterpiece shall be taught alongside [other] masterful works of microhistory to rightly place the social history of the Ottoman Empire in conversation with the history of Europe."

"Sajdi's highly original work takes the reader deep into the social fabric of the eighteenth-century Levant and back through centuries of Arabic history-writing, illuminating a landscape of literary experimentation, eroding hierarchies, and new urban pastimes. An erudite work of impeccable scholarship."

"The Barber of Damascus brings to life a world of unexpected writers of history. Ibn Budayr and his work as barber and historian disrupt our notions of genre and give us a marvelous portrait of Damascus in the eighteenth century."

"Scholars and students of Middle Eastern history and literary studies will find a great deal to appreciate and capture their interest. In addition to her high level of scholarship on multiple fronts, as a social historian, biographer, and literary analyst, Sajdi writes clearly and makes expert use of Ibn Budayr's own words to tell his story and that of his history. For both its insights and its information, the book deserves to be read and enjoyed by a wide readership."

"Sajdi's The Barber of Damascus is a study, which, without any doubt, will become foundational to students and researchers focusing on the cultural and intellectual history of the Levant in Ottoman times."

"[T]he book is a fine example of interdisciplinary research that speaks to both history and comparative literature. It is a pioneering study that introduces the world of laypersons in the eighteenth-century Ottoman Levant. Although the book engages in complicated issues of the cultural and social history and the literary studies of the eighteenth century, Sajdi's writing style is easy to follow, and her use of clear arguments and the fluidity of her language is impressive. The book represents a major contribution to microhistorical studies of the Ottoman world and will likely become a classic read by students of the cultural and social history of the Ottoman Levant in the early modern era." 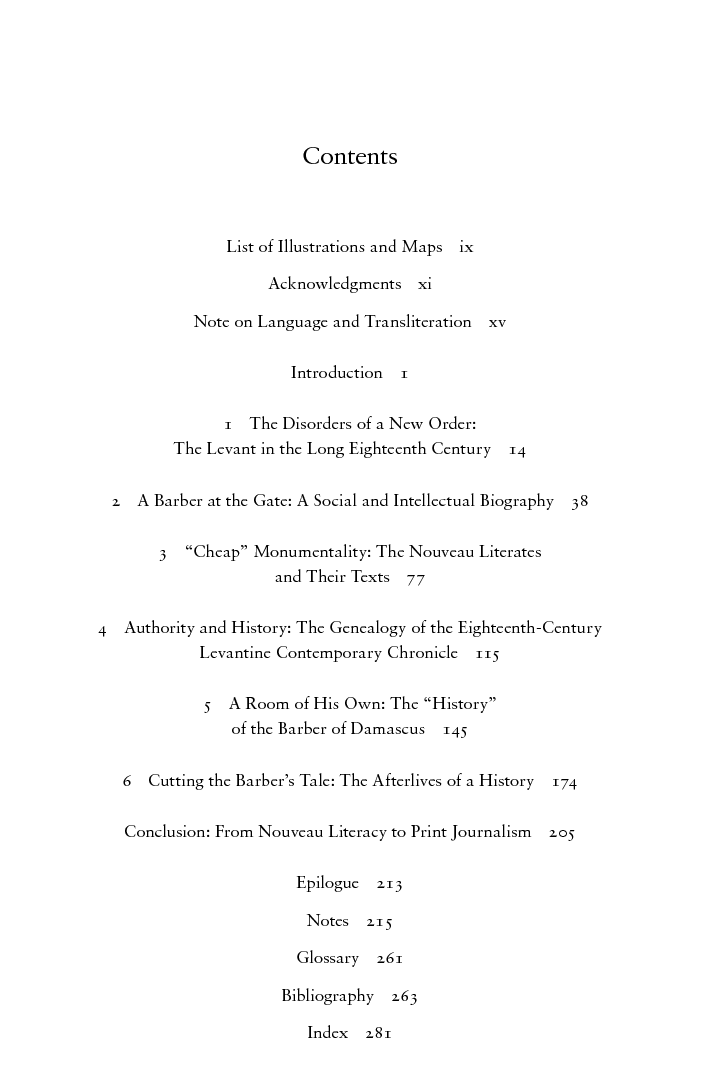 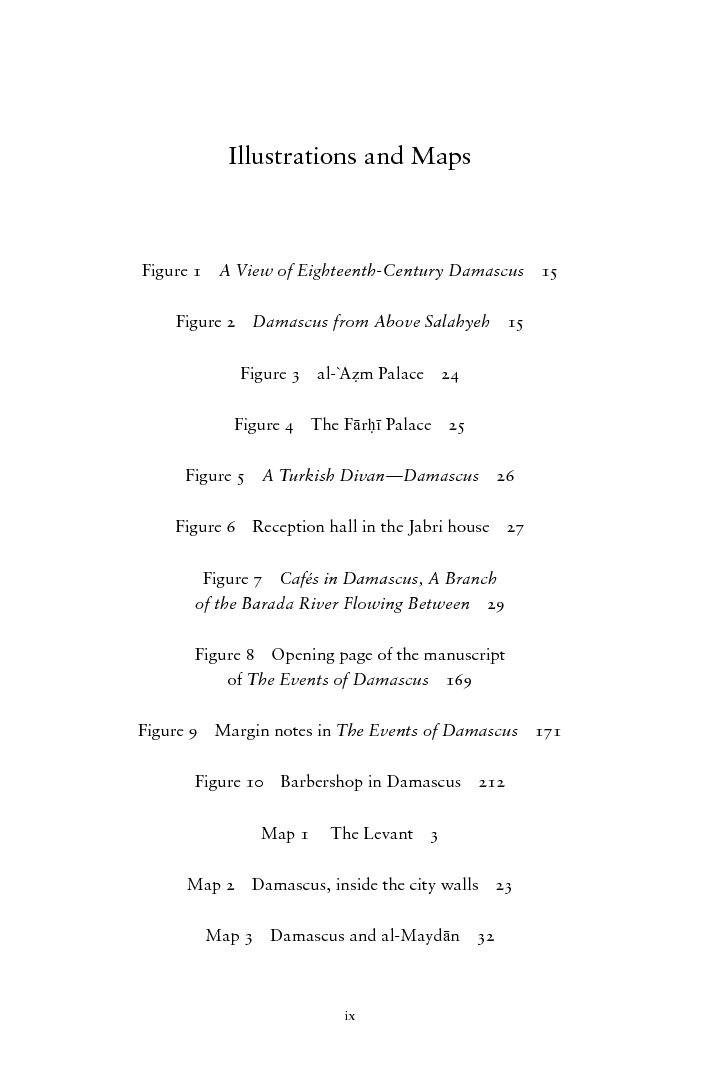 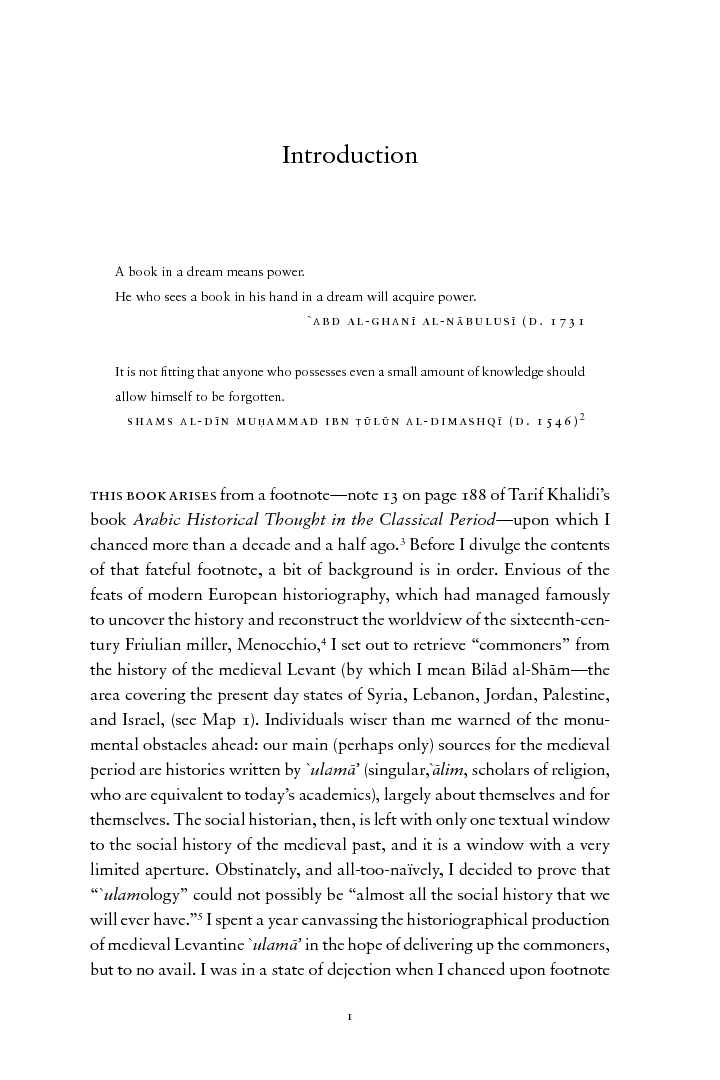 The Barber of Damascus