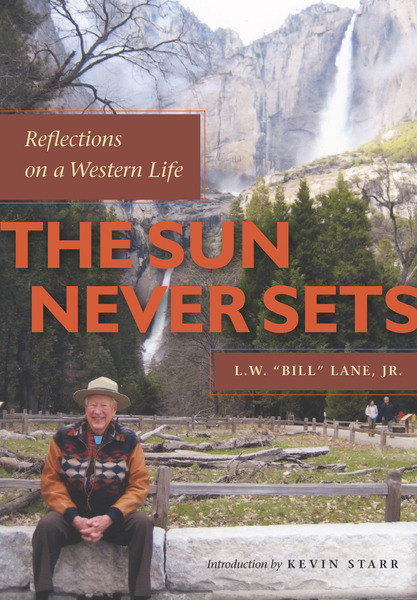 The Sun Never Sets tells the extraordinary story of L.W. "Bill" Lane, Jr., longtime publisher of Sunset magazine, pioneering environmentalist, and U.S. ambassador. Written with Stanford historian Bertrand Patenaude, this fascinating memoir traces Sunset's profound impact on a new generation of Americans seeking opportunity and adventure in the great American West. Bill Lane was a Californian whose life spanned a vital period of the state's emergence as the embodiment (or symbol) of the country's aspirations. His recollections offer readers a rich slice of the history of California and the West in the 20th century. Recounting his boyhood move from Iowa to California after his father purchased Sunset magazine in 1928, and his subsequent rise through the ranks of Sunset, Bill Lane's memoir evokes the American West that his magazine helped to shape. It illuminates the sources of Sunset's canny appeal and its manifold influence in the four major editorial fields it covered—travel, home, gardening, and cooking—while taking readers behind the scenes of American magazine publishing in the 20th century. The Sun Never Sets also reveals the evolution of Bill Lane's views and roles as an influential environmentalist and conservationist with strong connections to the national and California state parks, and it recounts his two stints as U.S. ambassador: in Japan in the 1970s, and in Australia in the 1980s. This memoir will especially appeal to readers interested in the history of the American West, environmental conservation and preservation, and publishing.

Bill Lane was Publisher of Sunset magazine and Co-Chairman of Lane Publishing Company. A graduate of Stanford University, Mr. Lane served as U.S. Ambassador to Australia and Nauru (1985–1989) and Ambassador-at-large and Commissioner General, Japan (1975–1976). Mr. Lane died in 2010.

Bertrand Patenaude teaches history at Stanford University. He is the author of A Wealth of Ideas (Stanford, 2005) and The Big Show in Bololand: The American Relief Expedition to Soviet Russia in the Famine of 1921 (Stanford, 2002).

"Bill Lane was a one-of-a-kind terrific guy who lived an energetic and constructive life. This memoir is a compelling reminder that the sun never sets on Bill Lane."

"Bill was a man of the West. He was born on the sunset side of the Mississippi, moved as a young boy to California, hiked and packed as a lad in the great western parks of Yosemite and Sequoia, immersed himself in the region's stories and legends, and for decades published Sunset Magazine, as iconic a repository of western lore and lifestyles as there has ever been. His story is the story of the region he loved and served so well." 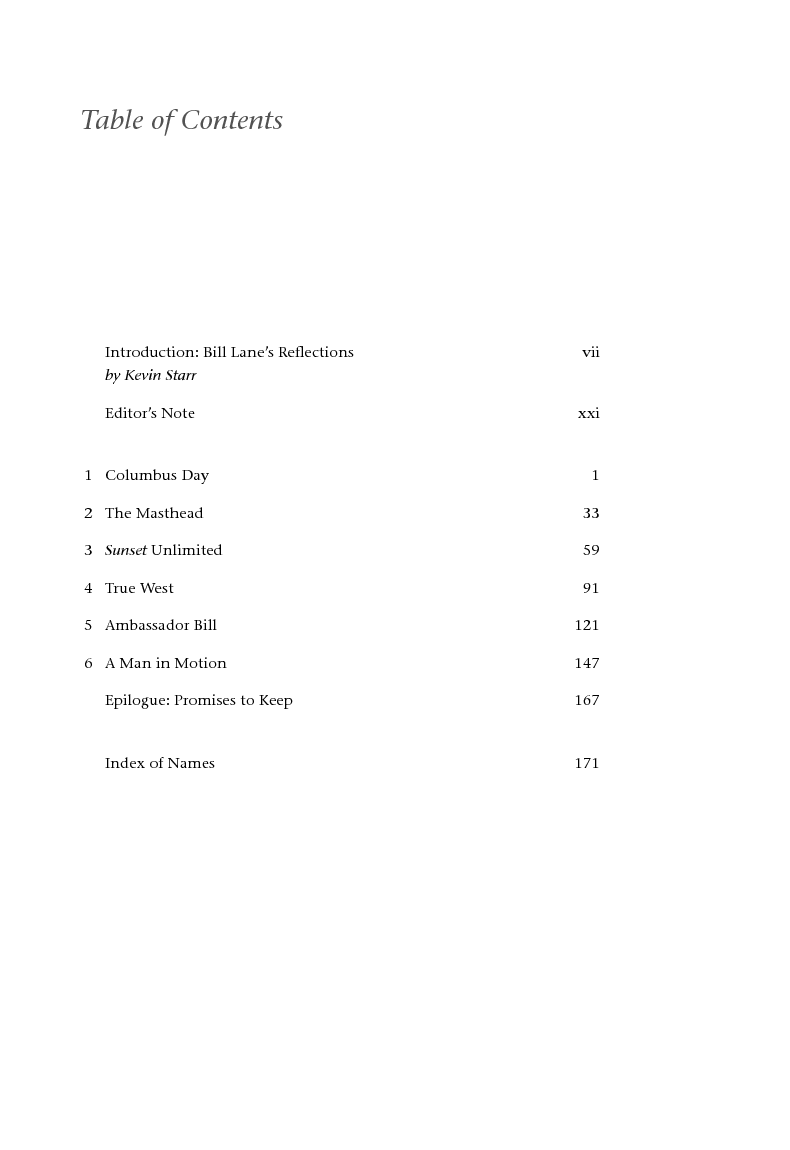 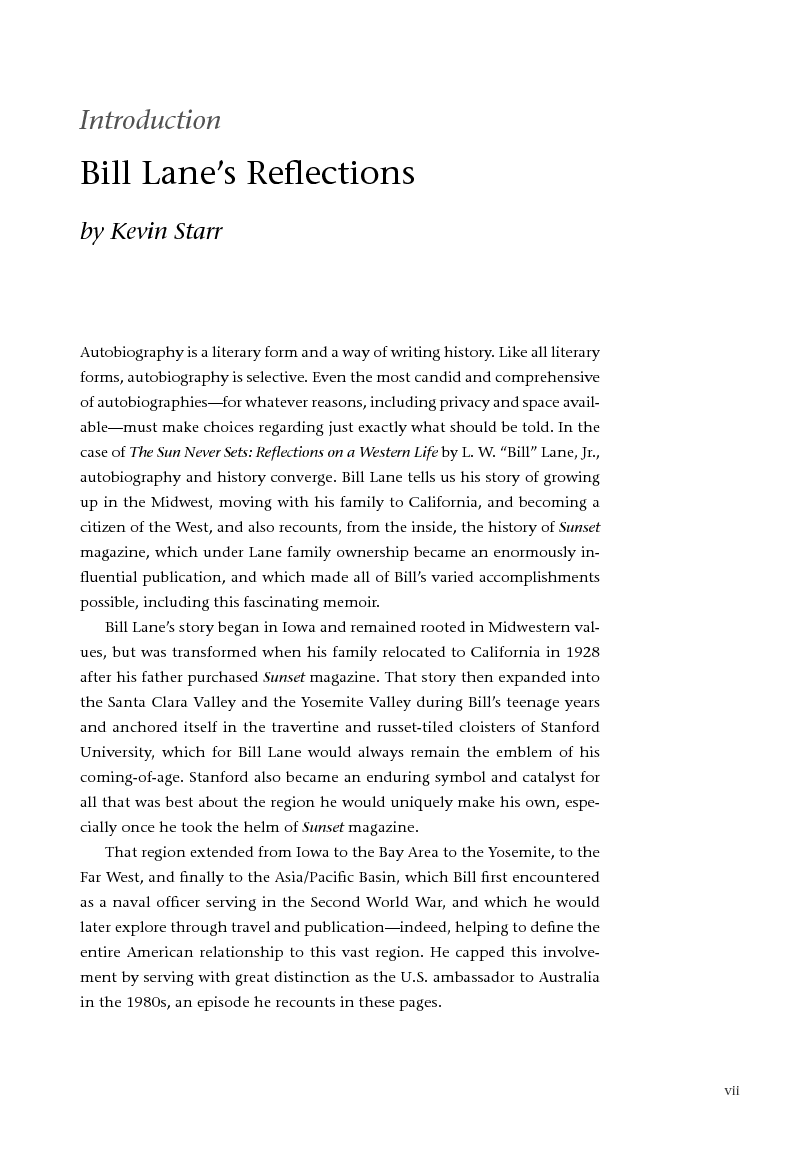 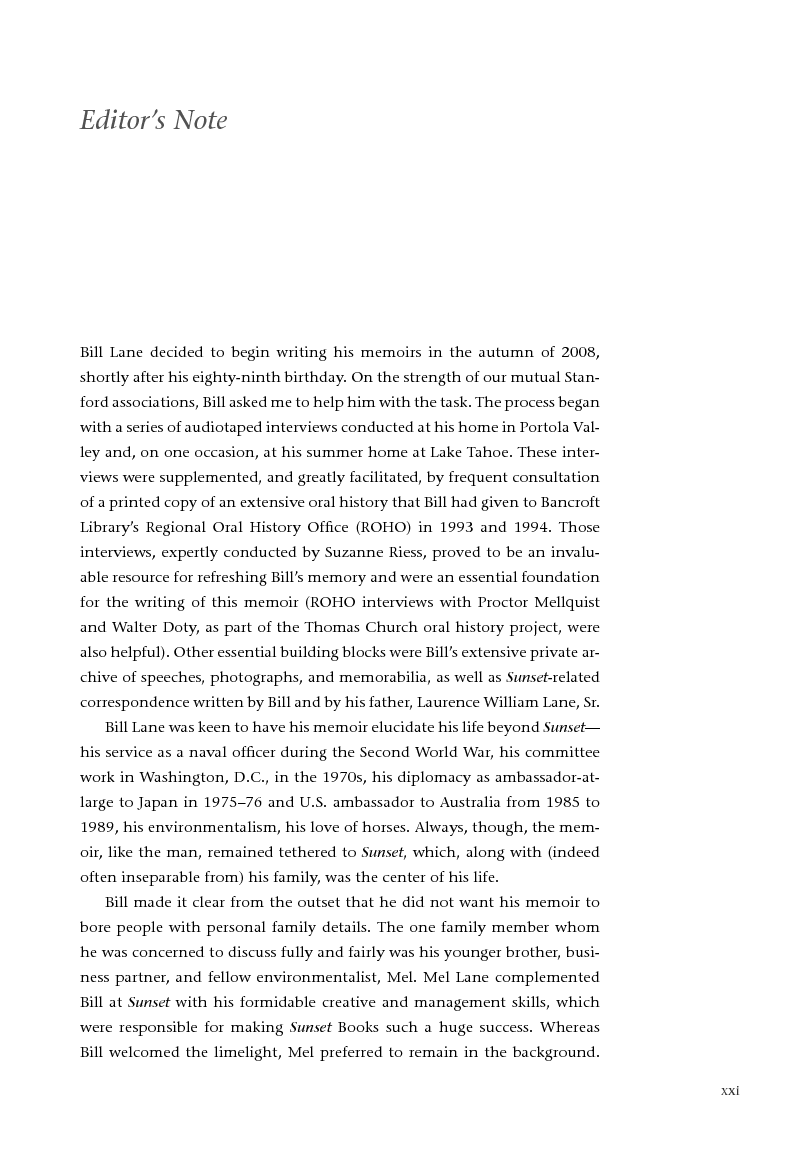