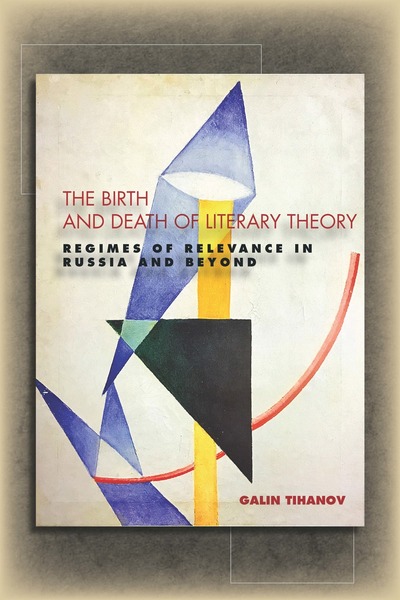 Until the 1940s, when awareness of Russian Formalism began to spread, literary theory remained almost exclusively a Russian and Eastern European invention. The Birth and Death of Literary Theory tells the story of literary theory by focusing on its formative interwar decades in Russia. Nowhere else did literary theory emerge and peak so early, even as it shared space with other modes of reflection on literature. A comprehensive account of every important Russian trend between the world wars, the book traces their wider impact in the West during the 20th and 21st centuries. Ranging from Formalism and Bakhtin to the legacy of classic literary theory in our post-deconstruction, world literature era, Galin Tihanov provides answers to two fundamental questions: What does it mean to think about literature theoretically, and what happens to literary theory when this option is no longer available? Asserting radical historicity, he offers a time-limited way of reflecting upon literature—not in order to write theory's obituary but to examine its continuous presence across successive regimes of relevance. Engaging and insightful, this is a book for anyone interested in theory's origins and in what has happened since its demise.

Galin Tihanov is the George Steiner Professor of Comparative Literature at Queen Mary University of London.

"Up to now, no one has woven together the many threads of Russian literary thought—Formalism, Socialist Realism, Marxism, the Bakhtin Circle, and the many groups, domestic and émigré, that shaped modern theory. With a large cast of characters and a sharp, cumulative argument, Tihanov renders obsolete numerous received judgments about theory's origins and impact."

"The foundational status of literary theory in twentieth-century Russia has never been described with greater attention to detail than in Galin Tihanov's new book. And this extraordinary historical groundwork results in the ultimate challenge for literary criticism today: can and should the discipline survive under epistemological conditions that are now so radically different?"

"Eloquent and erudite, Galin Tihanov offers us a magisterial account of twentieth-century Russian literary theory. His book is not a survey but a careful analysis of diverse movements and theorists whose unexpected juxtapositions put familiar concepts and people in an entirely new light. This is intellectual history at its best."

"Committed both to rigorous historical contextualization and to the clear analysis of ideas, Tihanov's highly original book addresses a topic of major concern to the humanities, the rise of literary theory, showing the central contribution of Russian thinkers to it. This is the first book one should read on its subject."

"Tihanov has written an excellent book that provides a plethora of substance for reflection, and most importantly reminds us of the time when literature and the study of literature was taken seriously to an extent that to most readers today seems like an act of defamiliarization in itself."

"If literary theory is your thing, and you're feeling uninspired by what the Anglo-American academy has to offer, The Birth and Death is a fine showcase for what is, in effect, another world of literary theory, largely untapped. That Tihanov writes about...quite different approaches to literature—as well as about canon wars within the Russian émigré community—with such authority and erudition is, frankly, remarkable in itself."

"[One] senses that Tihanov, whose own intellectual range is staggering, could have chosen any number of examples to demonstrate his thesis....[A] rich and generous book."

"There are few literary critics and theorists that delve into the afterlives of past theories and theoretical trends as dazzlingly and lucidly as Galin Tihanov does."

"Tihanov's journey across past intellectual landscapes is engaging and helpful: it allows us to understand a great deal about the past, the present, and ourselves in that present."

"This detailed, authoritative study of the European twentieth century in terms of literary and cultural theory, its only fault being its understatement, ranges through several countries and languages, bringing familiar names into interesting juxtapositions."

"This book is not another paean to the end of theory but is, altogether, more impressive and circular in its elaboration. It is a brilliant distillation of theory's inception....The rigorously researched history that Tihanov advances demonstrates an ambition unparalleled in much literary history and criticism."