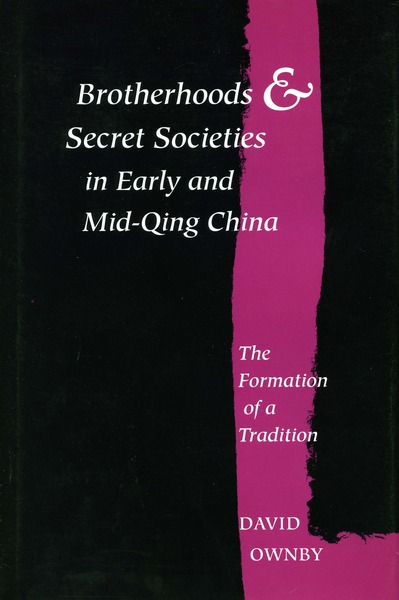 This study examines the emergence and evolution in China of a tradition of popular organization generally known under the rubric of “secret society.” The author suggests that the secret society is properly understood as one variety of the “brotherhood association,” a category that encompasses a range of popular fraternal organizations that flourished in the early and mid-Qing period.

The book begins by describing the proliferation of brotherhood associations in the seventeenth and eighteenth centuries, particularly in Southeast China. It concludes in the early nineteenth century, as the Qing suppression of the Lin Shuangwen rebellion in late 1780’s forced members of the best-known brotherhood association, the Heaven and Earth Society (Tiandihui) to flee their homes in the Southeast, taking refuge in other parts of South China and Southeast Asia and, eventually, in Chinatowns throughout the world. This episode set the stage for the violent nineteenth-century confrontations between the Qing state and the secret societies.

David Ownby is Assistant Research Fellow at the Université de Montréal. He is the co-editor, with Mary Somers Heidhues, of "Secret Societies" Reconsidered: Perspectives on the Social History of Early Modern South China and Southeast Asia.