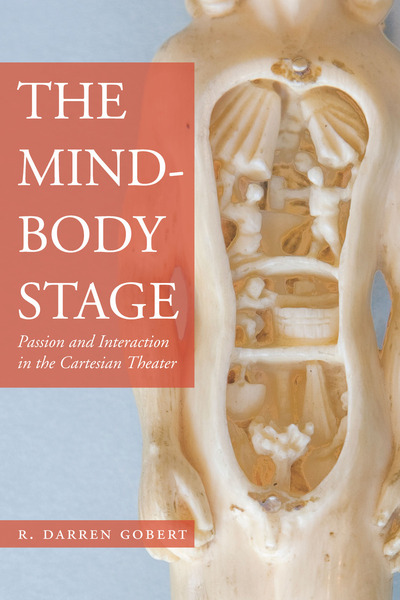 The Mind-Body Stage
Passion and Interaction in the Cartesian Theater
R. Darren Gobert

Winner of the 2014 Barnard Hewitt Award for Outstanding Research in Theatre History, sponsored by the American Society for Theatre Research.

Descartes's notion of subjectivity changed the way characters would be written, performed by actors, and received by audiences. His coordinate system reshaped how theatrical space would be conceived and built. His theory of the passions revolutionized our understanding of the emotional exchange between spectacle and spectators. Yet theater scholars have not seen Descartes's transformational impact on theater history. Nor have philosophers looked to this history to understand his reception and impact. After Descartes, playwrights put Cartesian characters on the stage and thematized their rational workings. Actors adapted their performances to account for new models of subjectivity and physiology. Critics theorized the theater's emotional and ethical benefits in Cartesian terms. Architects fostered these benefits by altering their designs.

The Mind-Body Stage provides a dazzlingly original picture of one of the most consequential and confusing periods in the histories of modern theater and philosophy. Interdisciplinary and comparatist in scope, it uses methodological techniques from literary study, philosophy, theater history, and performance studies and draws on scores of documents (including letters, libretti, religious jeremiads, aesthetic treatises, and architectural plans) from several countries.

"A major contribution to the burgeoning field of theatre and philosophy, The Mind-Body Stage shows that Descartes's meditations on subjectivity changed the way character was conceived, that his study of geometry literally reshaped theatrical space, and that his theory of the passions revolutionized conceptions of the emotional dynamic between spectacle and spectator . . . The Mind-Body Stage breaks new ground. Its theoretical rigour, historical depth, and acute analysis will contribute substantially to new work on the relation between theatre and philosophy. It should be required reading for anyone who cares about theatre, drama, and intellectual history."

"This intriguing study fulfills the promise to trace the hidden role that Cartesianism played in theater history in the seventeenth century—and beyond."

"The strength of R. Darren Gobert's book, The Mind-Body Stage: Passion and Interaction in the Cartesian Theater, is to align itself not with Cartesian dualism but with the theatrical proofs of Descartes's cultural relevance in the creation of the plays, performances, and even the theatrical architecture of his time . . . Gobert successfully illustrates the ways in which Cartesian philosophy has been coterminous with meaningful changes in the theatre of interrelationship, whose borders are constantly in and at play."

"The strength of Darren R. Gobert's The Mind-Body Stage is in the creative and compelling layering of theatrical developments in playwriting, acting, and theatre architecture onto the philosophical writings of Rene Descartes . . . [T]his book [is] a fantastic resource for students of theatre as well as theatre historians."

"R. Darren Gobert's elegant The Mind-Body Stage represents a significant scholarly and stylistic accomplishment . . . Gobert has made an important contribution to the wider intellectual discourse on the widely variegated terrain currently described as performance philosophy . . . [T]he text is an exemplar of finely tuned, witty, and compelling scholarship that will most certainly have a significant influence in theatre and performance studies, as well as in a variety of related interfields and emergent interdisciplinary constellations of thinking."

"...Gobert is at his best, combining his facility with close readings of text and rigorous analyses of material history to shed light upon the 'quarrel' surrounding Moliere's School for Wives . . . [T]he reader feels not exhausted by the author's thoroughness, but impassioned by it."

"This year's winner of the Barnard Hewitt Award for Outstanding Research in Theatre goes to a book that the jury unanimously found unique and surprising. It enters the realm of seventeenth-century philosophy and finds there the key to understanding the profound influence it exerted in drama, stagecraft, playhouses, and performances—influences that would shape not only theatre throughout the eighteenth century, but theatre to the present day. Meticulously researched, the book traces the influence of mind-body dualism through literary and material manifestations: in Swedish court ballet, French classical tragedy, and English burlesques, as well as in theatrical architecture, design, and acting practices. This book demonstrates not only solid research but the kind of innovative thinking that moves our field forward. Congratulations to Darren Gobert for The Mind-Body Stage: Passion and Interaction in the Cartesian Theater."

"[A] scholarly tour-de-force . . . Gobert has done a great service to scholarship in both the history of philosophy and theatre studies and helped Descartes take a further step onto the stage of the world."

"With the publication of Gobert's book, no longer can we see the Cartesian subject as a pure mind disconnected from others or the 'emotional cocktails' that constitute experience. His fascinating and original discussion of Descartes's theory of the passions and the mind-body union is a must for scholars of early modern literature and drama, historians of philosophy and of science, and philosophers of mind and neuroscience."

"A terrific contribution to the growing literature on theater and philosophy, The Mind-Body Stage shows us a Descartes who writes ballet and who sees his thought dramatized by Corneille and enacted by Moliere. Far from being mortal enemies, theater and philosophy engage in a passionate pas de deux from which emerges nothing less than a Cartesian Theater."

"R. Darren Gobert's elegant and convincing The Mind-Body Stage: Passion and Interaction in the Cartesian Theater represents a significant scholarly and stylistic accomplishment that the members of the Ann Saddlemyer Award committee are pleased to elect as the winner for 2014. Gobert stages a generative incursion into contemporary and historical discussions around the complex relationship between theatre and philosophy by first demonstrating how theatre scholars have paid insufficient attention to Descartes' transformational impact on theatre history, and how for their part philosophers have generally not thoroughly investigated the cultural impact and reception of Descartes' thought. The contributions the volume makes to theatre studies and performance studies, as well as to the emerging discourse of performance philosophy, are significant. Gobert's extensive archival and theoretical engagements demonstrate the lack of veracity underpinning our currently dominant scholarly shorthand of 'Cartesian' as that which would establish a bifurcated relationship between 'mind' and 'body'. Descartes' exchange of letters with Elizabeth of Bohemia is shown to be key to a developing momentum of insights around mind-body interaction that leads the late Descartes to increasingly centralize the body as an epistemological nexus. Ballet and theatre are understood to be key sites of the manifestation of the body's capacity for generating joyful experience and memory. Gobert's acute analysis of Descartes' paradigm-shifting impact on playwriting is traced through the work of Corneille and John Dryden respectively. Descartes' significant contributions to thinking around acting are shown to have influenced an entire genealogy of writing and performance practice in France and in England, and by extension an entire practice of European theatre architecture. Overall, the text is an exemplar of finely-tuned, witty and compelling scholarship that will most certainly have a significant influence a variety of fields." 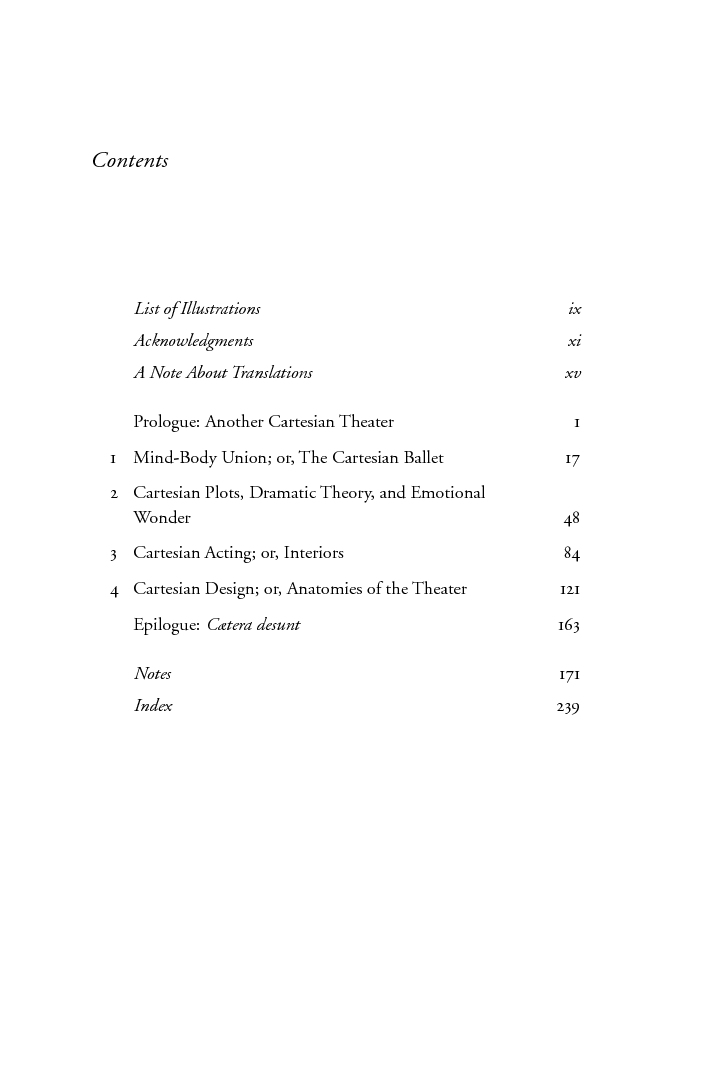 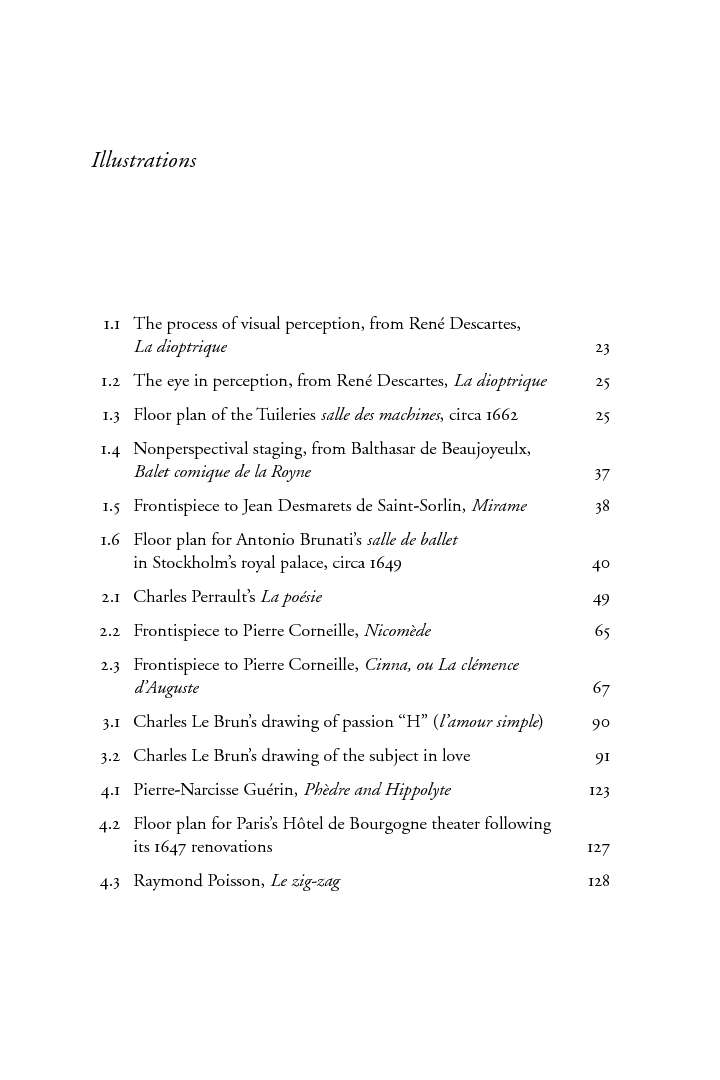 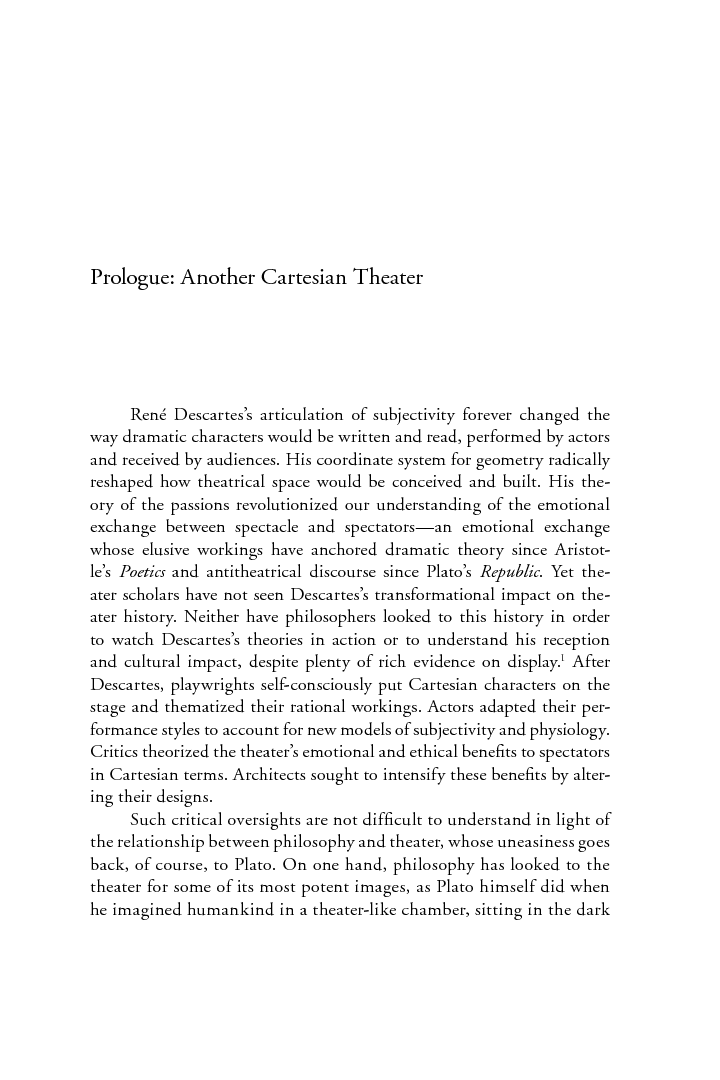