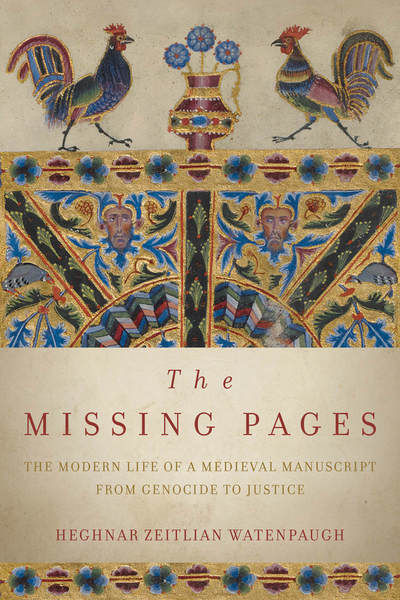 The Missing Pages
The Modern Life of a Medieval Manuscript, from Genocide to Justice
Heghnar Zeitlian Watenpaugh

Shortlisted for the 2020 Saroyan Prize - Non-Fiction category, sponsored by the Stanford Libraries.

Winner of the 2020 Ottoman and Turkish Studies Association Book Prize.

In 2010, the world's wealthiest art institution, the J. Paul Getty Museum, found itself confronted by a century-old genocide. The Armenian Church was suing for the return of eight pages from the Zeytun Gospels, a manuscript illuminated by the greatest medieval Armenian artist, Toros Roslin. Protected for centuries in a remote church, the holy manuscript had followed the waves of displaced people exterminated during the Armenian genocide. Passed from hand to hand, caught in the confusion and brutality of the First World War, it was cleaved in two. Decades later, the manuscript found its way to the Republic of Armenia, while its missing eight pages came to the Getty.

The Missing Pages is the biography of a manuscript that is at once art, sacred object, and cultural heritage. Its tale mirrors the story of its scattered community as Armenians have struggled to redefine themselves after genocide and in the absence of a homeland. Heghnar Zeitlian Watenpaugh follows in the manuscript's footsteps through seven centuries, from medieval Armenia to the killing fields of 1915 Anatolia, the refugee camps of Aleppo, Ellis Island, and Soviet Armenia, and ultimately to a Los Angeles courtroom.

Reconstructing the path of the pages, Watenpaugh uncovers the rich tapestry of an extraordinary artwork and the people touched by it. At once a story of genocide and survival, of unimaginable loss and resilience, The Missing Pages captures the human costs of war and persuasively makes the case for a human right to art.

Heghnar Zeitlian Watenpaugh is Professor of Art History at the University of California, Davis. She is the award-winning author of The Image of an Ottoman City: Architecture in Aleppo (2004). Her writing has also appeared in the Huffington Post and the Los Angeles Times.

"In this compelling and original work, Heghnar Watenpaugh traces the dramatic and epic journey of a sacred work of art. The Missing Pages brings together an understanding of the deeper layers of culture and history with the ethical issues surrounding art, identity, and ownership."

—Peter Balakian, author of The Burning Tigris: The Armenian Genocide and America's Response

"Heghnar Watenpaugh is a superb scholar and rare sleuth. But what makes The Missing Pages truly remarkable is her gift of storytelling. This is a book with the soul of language—moving, affirming, illuminating."

—Mark Arax, author of The Dreamt Land: Chasing Dust and Water Across California

"Heghnar Watenpaugh writes with colorful prose and deep historical texture. The Missing Pages adds much to how we understand the written word in medieval Armenia, as well as the tragic events surrounding the Genocide itself."

"In the fracturing of the Zeytun Gospels, Heghnar Watenpaugh captures the everlasting violence of genocide as it shears and slices into human lives across time and place. Written with both erudition and passion, The Missing Pages is a labor of love and a must-read for anyone concerned with the human right to art."

—Fatma Müge Göçek, author of Denial of Violence: Ottoman Past, Turkish Present, and Collective Violence against the Armenians, 1789-2009

"The Missing Pages is a well-told tale of the history of the Armenian people. Heghnar Watenpaugh takes us on a wondrous and terrifically engrossing journey of this sacred religious object and priceless work of art."

—Michael Bazyler, author of Holocaust Justice: The Battle for Restitution in America's Courts

"In The Missing Pages, Heghnar Zeitlian Watenpaugh tells the gripping story of the Zeytun Gospels, a 'survivor object' that bears the traces of centuries of Armenian history and culture. Moving across eras and national borders, Watenpaugh's powerful narrative offers a unique perspective on the fate of cultural heritage in the face of genocide and denial. An essential book for all who are concerned with art, human rights, and post-traumatic resilience."

—Michael Rothberg, author of Multidirectional Memory: Remembering the Holocaust in the Age of Decolonization

"[Watenpaugh's] book alerts us to the urgent moral and political questions still to be addressed even in the rarefied world of the museum and the library: she forces us to attend to the human agonies, cultural calamities, and moral ambiguities that lie behind many apparently tranquil museum exhibits."

"[A] gripping, and at times unsettling, history of what is known as the Zeytun Gospels, a lavishly illuminated Armenian book that miraculously survived centuries of war, conquest and dispossession.In addition to supplying an important account of a celebrated object, Ms. Watenpaugh has written an impassioned polemic. She invites us to consider how the 'power of curation,' as well as the publicity and wealth attendant upon modern museum culture, can transform an object of specific liturgical use into a highly valued work of art, and what that might mean for all involved."

"The Missing Pages is a work that only Watenpaugh could write with her mastery of Arabic, Turkish, and especially Western Armenian....[She] is certain to attract the attention of scholars outside her field promising to usher forth a conversation about the relationship between cultural heritage and human rights."

"The Missing Pages... takes up issues of both more recent and long-standing art historical concern and, insofar as it is a narrative that unfolds between legal charges and settlement, as a whole adds real substance and nuance to debates on provenance and repatriation."

"The history of the [Zeytun Gospels] manuscript, which spans the better part of a millennium, represents a compelling example of why provenance research can also serve the cause of historical justice... [Watenpaugh] further discusses the need for museums to come to terms with the complicated and often controversial trajectories by which the objects they enshrine as art made their ways to their institutional homes, and how they also therefore speak with very human voices not only of terrible tragedy but also of the inseparable links between memory and material relics."

"It is hoped that The Missing Pages will contribute to and inform the ongoing debate over survivor objects and the positionality of the contemporary scholar with regard to contested pasts."

"Heghnar Zeitlian Watenpaugh has achieved the nearly impossible in this book. The volume is the fruit of extensive and profound scholarship, covering a variety of historical periods and geographical milieux... But the scholarship and historical expertise are worn lightly; and the author has succeeded in presenting the rather entangled history of a manuscript with clarity and passion. The result is accessible, highly readable, and may be enjoyed by the general reader as well as those with more specialised interests."