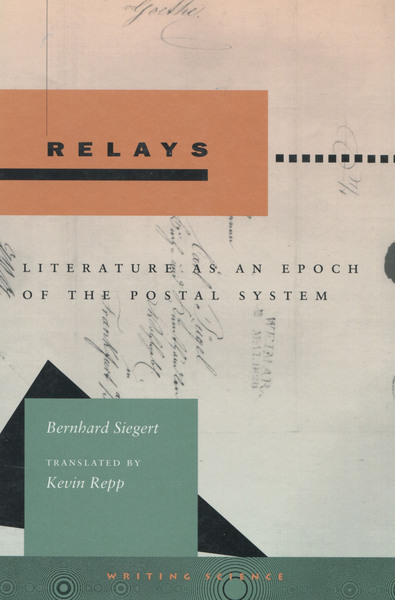 This book examines how one aspect of the social and technological situation of literature—namely, the postal system—determined how literature was produced and what was produced within literature. Language itself has the structure of a relay, where what is transmitted depends on a prior withholding. The social arrangements and technologies for achieving this transmission thus have had a particularly powerful impact on the imagination of literature as a medium.

The book has three parts. The first part reconstructs the postal conditions of classic and Romantic literature: the invention of postage in the seventeenth century, which transformed the postal system into a service meant to be used by the population (instead of by the prince alone); the sexualization of letter writing, which was introduced in the middle of the eighteenth century and changed the reading of a letter into an interpretation of intimate confessions of the soul; and Goethe’s turning of this new ontology of the letter into a logistics of literature whereby literary authorship was constructed by means of postal logistics, with the precision of engineering.

The second part analyzes nineteenth-century postal innovations that facilitated communication through letters and examines how literary works were able to live off such communication. These innovations included the reform of the post office; the invention of the postage stamp; the Universal Postal Union, which subjected letter writing to an economy of materials and uniform standards; and the telegraph and the telephone, which surpassed literature in terms of speed, economy, and analog-signal processing.

In the third part, on the basis of a close reading of Franz Kafka’s letters to his typist-fiancée, the author demonstrates how postal logistics of love and authorship have worked in the era of modern postal systems and technical media. Kafka’s correspondence is deciphered as a “war of nerves” waged by means of all available techniques and conditions of transmission.

Bernhard Siegert is a Research Scholar at the Zentrum für Literaturforschung, Berlin. He is co-editor, with Hans Ulrich Gumbrecht and Friedrich Kittler, of Der Dichter als Kommandant: D'Annunzio erobert Fiume.

"This will be important reading for anyone interested in the enormous influence of communication systems on literature and philosophy."