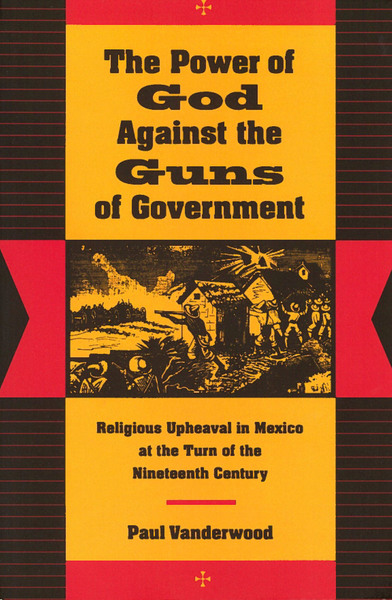 In the early 1890’s, an armed rebellion fueled by religious fervor erupted over a wide area of northwestern Mexico. At the center of the outburst were a few hundred farmers from the village of Tomochic and a teenage folk saint named Teresa, who was ministering to thousands of people throughout the area. When the villagers proclaimed, “We will obey no one but God!,” the Mexican government exiled “Santa Teresa” to the United States and trained its guns and bayonets on the farmers. A bloody confrontation ensued—God against government—that is still remembered in song, literature, films, and civic celebrations.

The tangled roots of the conflict reach into Mexico’s Indian past, stretch through its colonial experience, embrace the peculiar temperament of its Northerners, and encompass the ambitious program of rapid modernization launched by the government at the end of the nineteenth century. The government and its supporters had one vision of what they wanted Mexico to be; many villagers had a different view of what was right for them. Tomochic was split along fissures that had long marked local society, with religious dissenters reveling in the inspiration of Santa Teresa while others stood aside to await the government’s resolution of the upheaval.

After suffering several humiliating defeats by the faithful, more than a thousand army troops placed Tomochic under siege. Fighting was fierce, and as the military tightened the noose on its prey, an image of Santa Teresa was seen rising to glory into the heavens above the burning village.

In the minds of many, Tomochic has come to symbolize a people’s unending search for justice. Santa Teresa, in her day internationally known for miraculous healings, is still invoked by Mexican communities to help cure their social ills. Small wonder that only recently a young peasant rebel in Chiapas avowed: “I seek a decent life—liberation—just as God says.”

Paul Vanderwood is Professor Emeritus of History at San Diego State University and the author of several books on Mexican history.

"Vanderwood employs outstanding scholarship to offer a sophisticated and utterly fascinating analysis not only of the events at Tomochic but also of their broader historical context."

"Vanderwood weaves a well-researched story of Temochic village from its indigenous and colonial past to the siege of 1892 and beyond . . . a logical, fascinating narrative that the experienced scholar, as well as the new reader to the field, will find rewarding."

"Vanderwood has plumbed as deeply as any anthropologically inclined historian of Mexico the political thinking of popular groups, showing how it was infused with religious sensibility and the strongest affective bonds to place and community. He blends almost seamlessly local economic history with histories of power, political thinking with religious, and group profile with biography."