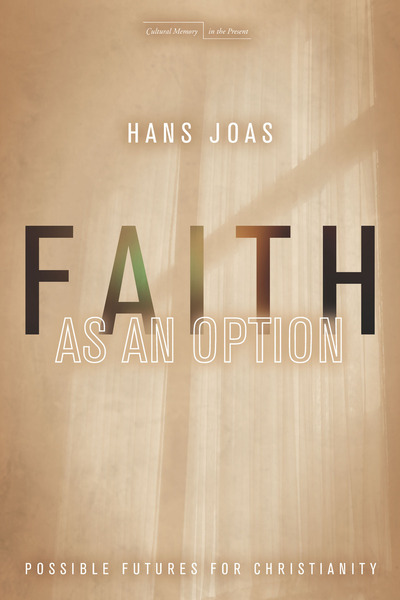 Faith as an Option
Possible Futures for Christianity
Hans Joas
SERIES: Cultural Memory in the Present

Many people these days regard religion as outdated and are unable to understand how believers can intellectually justify their faith. Nonbelievers have long assumed that progress in technology and the sciences renders religion irrelevant. Believers, in contrast, see religion as vital to society's spiritual and moral well-being. But does modernization lead to secularization? Does secularization lead to moral decay? Sociologist Hans Joas argues that these two supposed certainties have kept scholars from serious contemporary debate and that people must put these old arguments aside in order for debate to move forward. The emergence of a "secular option" does not mean that religion must decline, but that even believers must now define their faith as one option among many.

In this book, Joas spells out some of the consequences of the abandonment of conventional assumptions for contemporary religion and develops an alternative to the cliché of an inevitable conflict between Christianity and modernity. Arguing that secularization comes in waves and stressing the increasing contingency of our worlds, he calls upon faith to articulate contemporary experiences. Churches and religious communities must take into account religious diversity, but the modern world is not a threat to Christianity or to faith in general. On the contrary, Joas says, modernity and faith can be mutually enriching.

"This commentary on modern Christianity is a lively and clever critique of both secularization and modernization as master theories of social change . . . Faith as an Option has much to commend it. Joas's argument offers a robust critique of many conventional notions in mainstream sociology. His call to social scientists to face the realities of the day is to be warmly welcomed."

"Joas conducts his inquiry from a historical and contemporary sociological perspective, but one that is appropriately suspicious of sweeping claims and predictions about the course of social history. As he shows through a wealth of carefully researched sources and citations, the notion of secularization is by no means a straightforward one."

"Faith as an Option is much more than a descriptive attempt to explain a longstanding scholarly misnomer. Joas also provides an alternative conceptual framework for how modernity and faith can now facilitate and enrich one another."

"The leading sociologist working today in the German language, Joas is also the leading expert on American pragmatism, a creative pragmatist in his own right, and one of the most prominent interlocutors between American and European social thought. His book offers original understanding of one of the most debated fields in the social sciences, namely the thesis of the secularization of modern societies and the place and future possibilities of 'religion' in Western secular societies. Faith As an Option should challenge the assumptions not only of specialists, but also of the educated public, 'believers' and 'unbelievers' alike."

"While popular forms of the secularization thesis are unlikely to disappear anytime soon, Hans Joas's Faith as an Option is a great resource for lay and academic readers alike. It offers a better understanding of the assumptions undergirding the secularization thesis and current critiques of religion, while also providing a foundation for imagining commitment of faith in an era characterized by contingency. One can only hope, as this book invites, that a more responsible understanding of religion and secularization will contribute to better dialogue and mutual understanding within broader society." 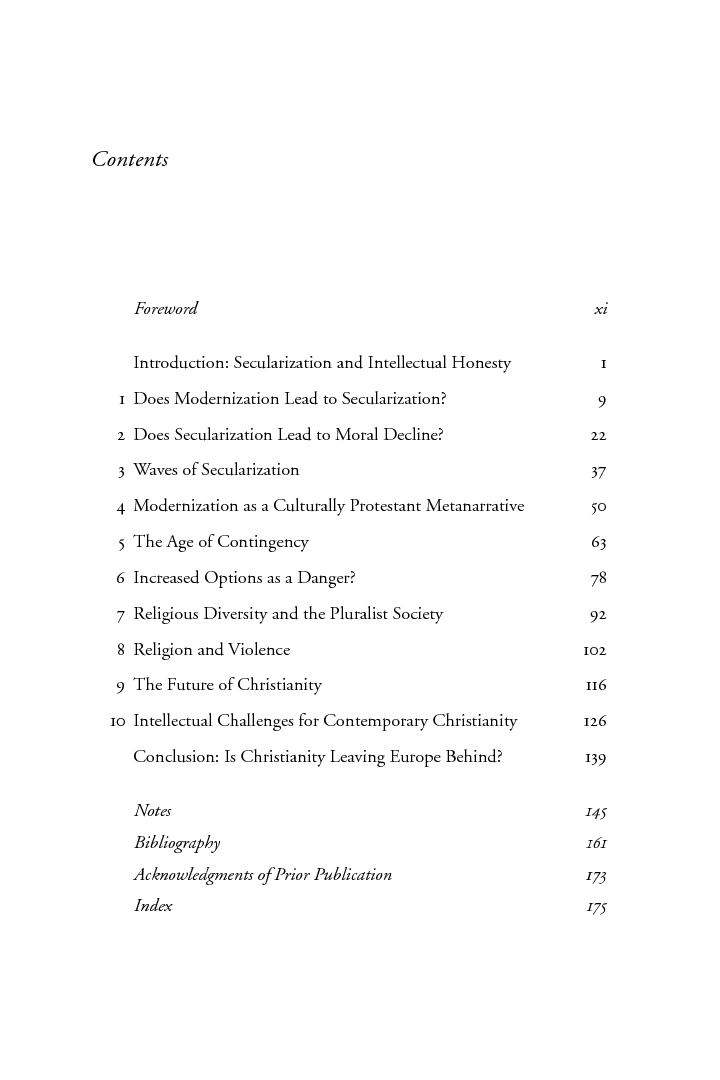 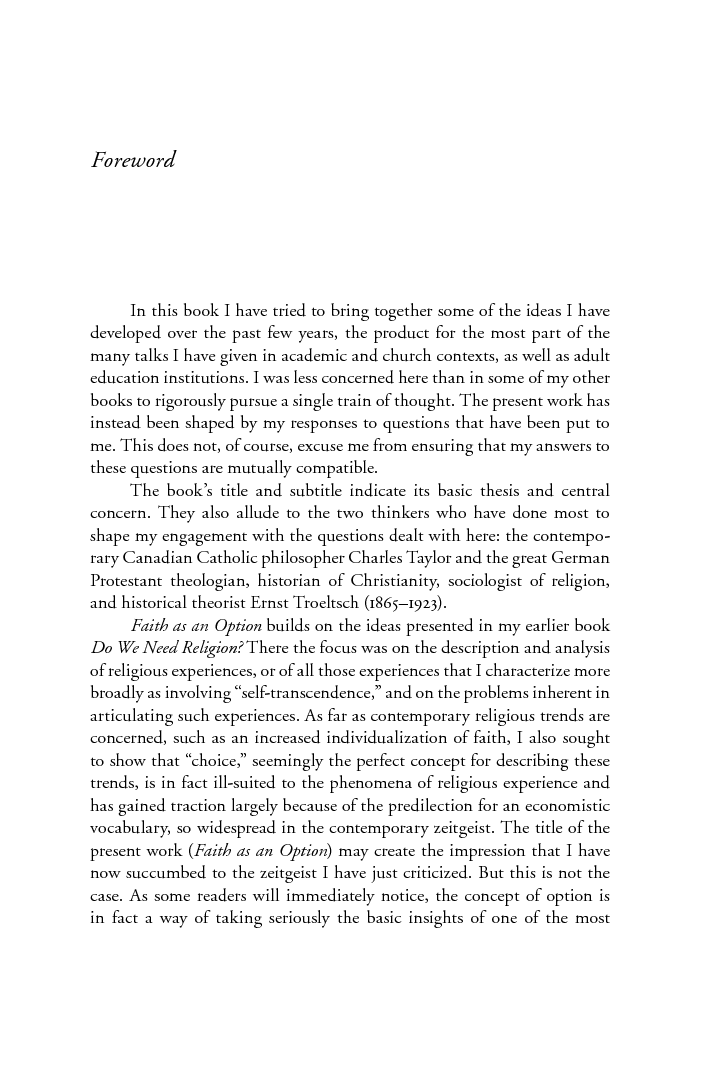 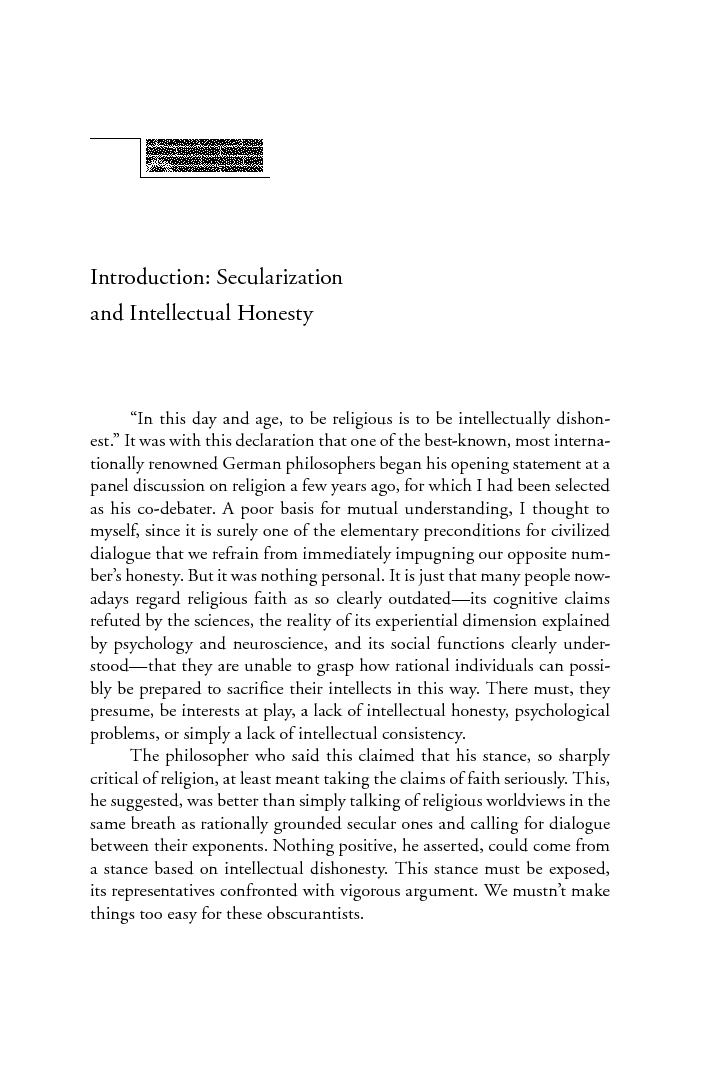