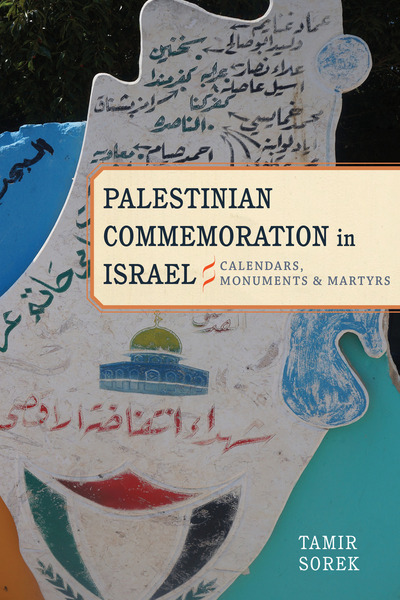 Winner of the 2016 Shapiro Award, sponsored by the Association for Israel Studies.

Collective memory transforms historical events into political myths. In this book, Tamir Sorek considers the development of collective memory and national commemoration among the Palestinian citizens of Israel. He charts the popular politicization of four key events—the Nakba, the 1956 Kafr Qasim Massacre, the 1976 Land Day, and the October 2000 killing of twelve Palestinian citizens in Israel—and investigates a range of commemorative sites, including memorial rallies, monuments, poetry, the education system, political summer camps, and individual historical remembrance. These sites have become battlefields between diverse social forces and actors—including Arab political parties, the Israeli government and security services, local authorities, grassroots organizations, journalists, and artists—over representations of the past.

Tamir Sorek is Associate Professor of Sociology and Israel Studies at the University of Florida. He is the author of Arab Soccer in a Jewish State: The Integrative Enclave (2007).

"A pioneering, intriguing, and thought-provoking study of acts of commemoration among the Arab-Palestinian minority in Israel. This book is a must-read for those interested in the distressing struggle of indigenous minorities to protect their identity in the face of nationalizing policies of ethnic states."

"Palestinian Commemoration in Israel is an evocative study and nuanced analysis of the development of commemorative culture among the Palestinian citizens of Israel. Tamir Sorek probes the challenges and tensions faced by this significant minority within Israeli society, caught in the web of the continuing Middle Eastern conflict. A must read for anyone interested in understanding Israeli society in its totality and the cultural dynamics of the Israeli-Palestinian conflict."

"Based on fifteen years of solid ethnographic fieldwork including participant observation, interviews, and surveys, this book focuses on the struggle of the indigenous Palestinian minority in Israel to preserve their identity through commemoration and manifestations of collective memory. In his compelling analysis, Sorek joins many others, such as Amal Jamal, Nadim Rouhana, and As'ad Ghanem, in making an important contribution to the literature on Palestinian citizens of Israel."

"Based on fifteen years of solid ethnographic fieldwork... this book focuses on the struggle of the indigenous Palestinian minority in Israel to preserve theiridentity through commemoration and manifestations of collective memory. In his compelling analysis, Sorek joins many others... in making an important contribution to the literature on Palestinian citizens of Israel."

"Palestinian Commemoration in Israel is a thoughtful publication on memory studies that illuminates the precarious search for identity and solidarity in the case of a "trapped minority" in Israel: the Palestinian-Israeli citizens....[T]his is a book that should be valuable reading for courses on Middle Eastern studies and collective memory. I recommend this book to readers in sociology, history, cultural studies, anthropology, and Middle Eastern and Islamic studies, as well as Israeli studies."

"The reader is left with a vivid and rich understanding of what Sorek promises in the introduction, namely a case for proclaiming Palestinian citizens of Israel as the extreme case of both a "trapped' minority and a colonized people"....Palestinian Commemoration in Israel is an important read for scholars and students interested in the construction of collective memory by a people within and against a state."