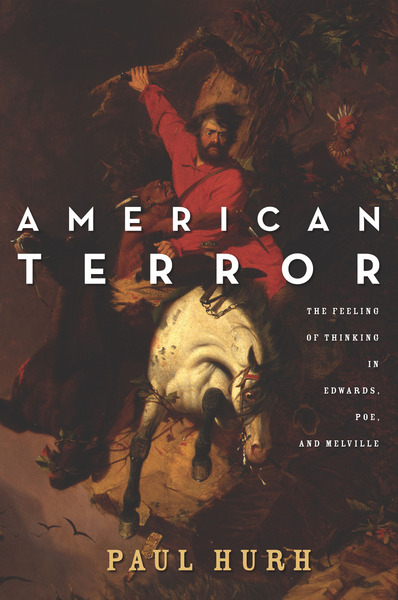 Winner of the 2016 Hennig Cohen Prize, sponsored by The Melville Society.

If America is a nation founded upon Enlightenment ideals, then why are so many of its most celebrated pieces of literature so dark? American Terror returns to the question of American literature's distinctive tone of terror through a close study of three authors—Jonathan Edwards, Edgar Allan Poe, and Herman Melville—who not only wrote works of terror, but who defended, theorized, and championed it.

Combining updated historical perspectives with close reading, Paul Hurh shows how these authors developed terror as a special literary affect informed by the way the concept of thinking becomes, in the wake of Enlightenment empiricism, increasingly defined by a set of austere mechanic processes, such as the scientific method and the algebraic functions of analytical logic. Rather than trying to find a feeling that would transcend thinking by subtending reason to emotion, these writers found in terror the feeling of thinking, the peculiar feeling of reason's authority over emotional schemes. In so doing, they grappled with a shared set of enduring questions: What is the difference between thinking and feeling? Why does it seem impossible to reason oneself out of an irrational fear? And what becomes of the freedom of the will when we discover that affects can push it around?

Paul Hurh is Associate Professor of English at the University of Arizona.

"In this fascinating study, Hurh explores the philosophical and historical foundations of the 'distinctive tone of terror' in the work of Jonathan Edwards, Edgar Allan Poe, and Herman Melville . . . The book is meticulously researched, and Hurh displays a wide-ranging knowledge of history, philosophy, and literary theory. Advanced readers will appreciate Hurh's attention to detail and his ability to convey complicated ideas in a straightforward manner . . . Highly recommended."

"Hurh asks why terror so often accompanies the philosophical provocations of Edwards, Poe, and Melville. His compelling answer is that their obsessions with method (thinking about thinking) not only reveal the limitations and unresolvable contradictions of reason in terrifying ways, but more importantly show the affect of terror to be constitutive of knowledge-seeking itself."

"American Terror is easily one of the most exciting works of Americanist criticism I have read in a long while. It is a strikingly original piece of scholarship; argued with great rigor, care, and verve; as attentive to its texts' literary dimensions as to their epistemological ones; and able in a way that very few studies are to explicate the ways in which these intertwine."

"Hurh makes a case for American literature's vibrant contribution to post-Enlightenment philosophy, even going so far as to locate the seeds of post-structural thought in the terrors of, for example, Poe's representation of the trapped and fractured self. There is both excitement and terror here in the dawning realization that he is right."