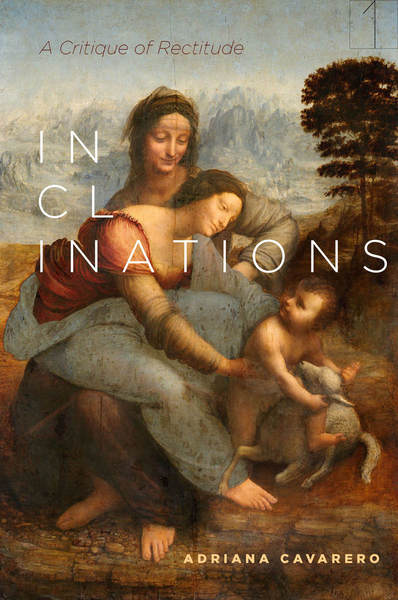 Inclinations
A Critique of Rectitude
Adriana Cavarero
SERIES: Square One: First-Order Questions in the Humanities

In this new and accessible book, Italy's best known feminist philosopher examines the moral and political significance of vertical posture in order to rethink subjectivity in terms of inclination. Contesting the classical figure of homo erectus or "upright man," Adriana Cavarero proposes an altruistic, open model of the subject—one who is inclined toward others. Contrasting the masculine upright with the feminine inclined, she references philosophical texts (by Plato, Thomas Hobbes, Immanuel Kant, Hannah Arendt, Elias Canetti, and others) as well as works of art (Barnett Newman, Leonardo da Vinci, Artemisia Gentileschi, and Alexander Rodchenko) and literature (Marcel Proust and Virginia Woolf).

Adriana Cavarero is Professor of Political Philosophy at the University of Verona. Her books in English include For More than One Voice (Stanford, 2005) and Horrorism (2008).

"Inclinations bears all the marks of Cavarero's work more generally: rigorous argumentation, a style at once direct and playful, a wide-ranging command of the philosophical tradition, combined with trenchant feminist critique."