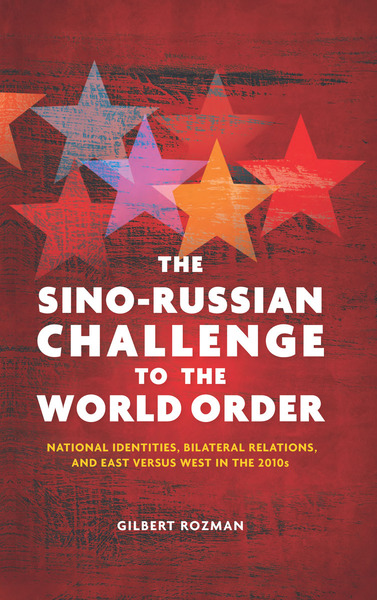 The Sino-Russian Challenge to the World Order
National Identities, Bilateral Relations, and East versus West in the 2010s
Gilbert Rozman

The Sino-Russian Challenge to the World Order is the third volume in Gilbert Rozman's trilogy on national identity. The first two volumes, edited by Gilbert Rozman, concerned the identities of three East Asian countries: China, Japan, and South Korea. These books analyzed how these countries' national identities suffered through their relation to modernization, and examined how the national identity of each differed from the other two and how those differences were shaped by the relation of each country to the United States.

In this third volume, Rozman examines Russia together with China. The Sino-Russian Challenge to the World Order argues that China and Russia's national identities are much closer to each other than usually thought, and are growing even closer. Moreover, the closeness of their identities comes neither from their prerevolutionary pasts nor from today's practical politics, but rather from habits carried over from their communist periods, even though the ideological dimensions of their identities have weakened since 1990.

Gilbert Rozman is Musgrave Professor of Sociology at Princeton University. His research examines comparisons of national identities and their impact on bilateral relations. He was the editor of the two predecessors to the present volume—East Asian National Identities: Common Roots and Chinese Exceptionalism and National Identities and Bilateral Relations: Widening Gaps in East Asia and Chinese Demonization of the United States. Rozman was a fellow at the Woodrow Wilson Center in 2010–11.

"This timely book is the third volume in a series of Gilbert Rozman's remarkable comparative studies on Chinese foreign relations examined from the perspective of national identity . . . Rozman's constructivist approach has a strong explanatory power."

"Gilbert Rozman's The Sino-Russian Challenge to the World Order is the third of a series he has written or edited, looking at international relations from the perspective of national identity. This is an important theme, and this book is timely, given the apparent drawing closer of Russia and China since 2013 . . . Rozman's account is a substantial one, and it is of considerable historical depth on the pre-communist eras through to the 2010s . . . It is a useful conclusion to a series which highlights the complex and changing nature of national identity and its impact on international relations."

"A masterful blending of the understandings accumulated over a lifetime of work that has included deep familiarity with sources in both Chinese and Russian, along with other languages. The two cases are treated in a genuinely comparative manner, rather than just providing two separate narratives, as so many 'comparisons' do."

"A very useful contribution to the field."