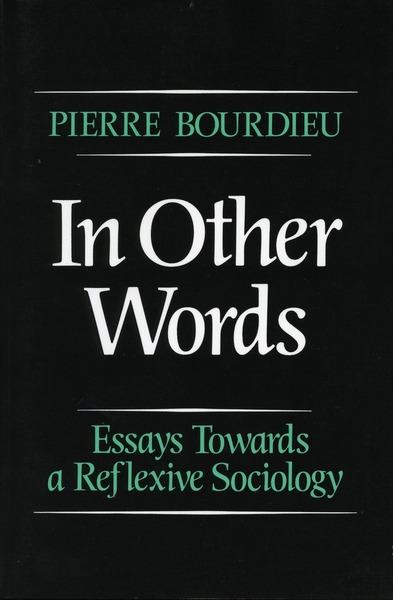 The influence of Pierre Bourdieu—one of the most protean intellectual forces in contemporary French thought—extends far beyond is home discipline of sociological research and thought. His work, presented in over twenty books, lies on the borders of philosophy, anthropology and ethnology, and cultural theory.

The present volume consists of diverse individual texts, produced between 1980 and 1986, which take two forms: interviews in which Bourdieu confronts a series of probing and intelligent interviewers, and conference papers that clarify and extend specific areas of his research. Now that Bourdieu's work has achieved wide diffusion and celebrity, this is an appropriate time for this volume, a pause for retrospection and resynthesis, for corrections of misreadings and extension of previous insights, and for projection of the next stages of his work. For this English edition, Bourdieu's celebrated inaugural lecture at the Collège de France, Leçon sur la Leçon, has been added.

The texts fall into two fundamental areas. The first area provides an overview of Bourdieu's central concepts, never before clearly explained. The second area clarifies the philosophical presuppositions of Bourdieu's studies and gives an account of his relations with the series of thinkers who formulated the problems in social and cultural theory that still preoccupy us: Kant, Hegel, Marx, Durkheim, Wittgenstein, Weber, Parsons, and Lévi-Strauss. Bourdieu's visions of these figures is personal and penetrating, and in his vivacious, spontaneous responses one sees at work a mode of thought that can in itself be a liberating tool of social analysis. Bourdieu applies to himself the method of analyzing cultural works that he expounds, evoking the space of theoretical possibilities presented to him at different moments of his intellectual itinerary.

"A synthesis and amplification to those already familiar with Bourdieu's work and a useful introduction for new readers."

"To read In Other Words is to enjoy a mind that works on many levels at once. Bourdieu seems perfectly able to reason coherently about any number of subjects (here he takes up sport, art, fieldwork, literature, philosophy, and opinion polls, among others). . . . It is an excellent informal guide to Bourdieu's sociological self-understanding. . . . This book may well be just the right introduction to an elegant and important thinker—possibly the most inventive thinker in sociology today."