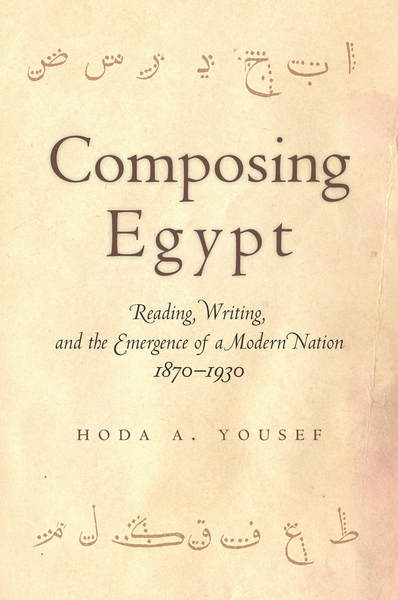 Composing Egypt
Reading, Writing, and the Emergence of a Modern Nation, 1870-1930
Hoda A. Yousef

In this innovative history of reading and writing, Hoda Yousef explores how the idea of literacy and its practices fundamentally altered the social fabric of Egypt at the turn of the twentieth century. She traces how nationalists, Islamic modernists, bureaucrats, journalists, and early feminists sought to reform reading habits, writing styles, and the Arabic language itself in their hopes that the right kind of literacy practices would create the right kind of Egyptians.

The impact of new reading and writing practices went well beyond the elites and the newly literate of Egyptian society, and this book reveals the increasingly ubiquitous reading and writing practices of literate, illiterate, and semi-literate Egyptians alike. Students who wrote petitions, women who frequented scribes, and communities who gathered to hear a newspaper read aloud all used various literacies to participate in social exchanges and civic negotiations regarding the most important issues of their day. Composing Egypt illustrates how reading and writing practices became not only an object of social reform, but also a central medium for public exchange. Wide segments of society could engage with new ideas about nationalism, education, gender, and, ultimately, what it meant to be part of "modern Egypt."

Hoda A. Yousef is Assistant Professor of History at Denison University.

"A splendid work of scholarship and a vital addition to the study of Middle Eastern cultural changes in modern times. By casting much new light on everyday practices through the prism of women and the lower social strata, it shows that the region's assimilation of reading and writing was both more intricate and more consequential than we had thought. A remarkable achievement."

"Hoda Yousef offers an elegantly written narrative, firmly anchored by rich, captivating documentation of new uses of literacy in literary, educational, and civic circles. Her broad framework for this project—engaging with the debates on literacy, education, and the modern gendered citizen in a global context—makes a major contribution to our understanding of this process in Egypt and elsewhere. Historians of gender, nationalism, and the making of modernities will greatly appreciate this book."

"Composing Egypt is a beautifully written and insightful exploration of a powerful moment in modern Egyptian history. Hoda Yousef leads her readers into the world of expectations that increasing public literacy in Egypt opened, and shows us 'the everyday literacies' of men and women, at a time when the country was the literary center of the world that spoke and read Arabic. This is an original and powerful study."

"Among the many merits of this book is its convincing argument regarding the pivotal place the concept of literacy should occupy in any scholarly treatment of the history and sociology of modernity. Presenting the complexities of this concept and its practice between gender boundaries, national demands, local traditions, and its institutionalization in the shade of the nation-state make this book essential not only for social historians but also for those who study the history of ideas in the Egyptian and Arabic context."

Literacies and the Emergence of Modern Egypt