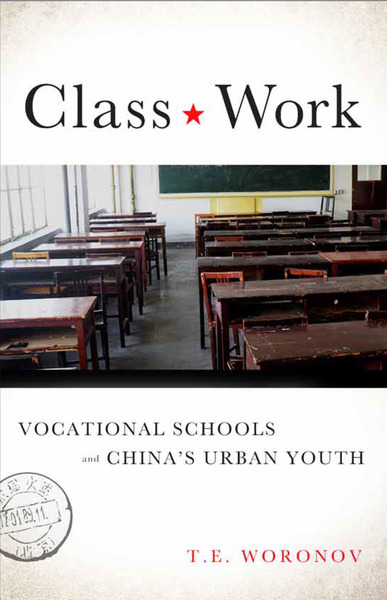 Images of Chinese teens with their heads buried in books for hours on end, preparing for high-stakes exams, dominate understandings of Chinese youth in both China and the West. But what about young people who are not on the path to academic success? What happens to youth who fail the state's high-stakes exams? What many—even in China—don't realize is that up to half of the nation's youth are flunked out of the academic education system after 9th grade.

Class Work explores the consequences for youth who have failed these exams, through an examination of two urban vocational schools in Nanjing, China. Through a close look at the students' backgrounds, experiences, the schools they attend, and their trajectories into the workforce, T.E. Woronov explores the value systems in contemporary China that stigmatize youth in urban vocational schools as "failures," and the political and economic structures that funnel them into working-class futures. She argues that these marginalized students and schools provide a privileged window into the ongoing, complex intersections between the socialist and capitalist modes of production in China today and the rapid transformation of China's cities into post-industrial, service-based economies. This book advances the notion that urban vocational schools are not merely "holding tanks" for academic failures; instead they are incipient sites for the formation of a new working class.

T.E. Woronov is Senior Lecturer of Anthropology at the University of Sydney.

"Combining rich ethnography with incisive analyses, Class Work is a wonderfully original account of the political economy of vocational education in contemporary China. Woronov illuminates several timely issues including the making of a new urban working class for the service sector, shifting regimes of value, flexible labor, and the fate of youth who are labeled as 'failures' in a transforming China."

"While everyone else looks the other way, Woronov draws our attention to the unglamorous experiences of millions of vocational students, who are viewed as academic and moral failures in urban China. This exemplary ethnography is full of insights into education, class formation and capitalism. It's an engaging read for anyone interested in China's complex realities and its potential futures."

"In this deservedly ambitious book, Woronov argues for the emergence of a new working class in China, one employed in the short-term service sector. Her powerful and rich ethnography of two vocational schools reveals nothing less than the transformation of value/s in China."

"Class Work provides deep and original insights into the 'nascent formation of a new urban working class,' which are of particular interest for scholars of labor, education, public services and social inequality in China, as well as comparative sociologists focusing on education and social stratification in developing countries."

"This engrossing volume makes one wonder if these young people's circumstances portend an atomized urban world to come, even as Woronov senses a new sort of class in the making. The sensitive fieldwork and perceptive reflections of this study mark it as a piece of scholarship that transcends its own subject matter, and it should attract and engage readers at various levels in the fields of anthropology, sociology, education, and political science. The book will encourage

contemplation among those who would not have imagined that studying these outcast students could carry much weight."

"Class Work certainly meets the criteria good ethnography as it contributes both to deepening our understanding of the particular while also theorising from the particular to further broader questions on youth, education, and class formation that are of obvious relevance beyond the Chinese context. As such, Class Work deserves a wide readership both within and beyond youth studies and should certainly not be read by China scholars only. "

"Class Work is an ethnography of vocational education and an anthropology of class formation. It offers an entirely new analytical perspective on the structure and practice of vocational education in China and provokes stimulating theoretical reflections on the making of social hierarchy and class after Mao. It is an excellent piece of scholarship that deserves a broad readership of students and researchers from different academic disciplines."

"Woronov's Class Work is a masterful piece of scholarship depicting a relatively understudied youth group in contemporary China. It deepens our understanding of how these 'failures' of the stereotypical Chinese cram schools struggle with the ideology of numeric capital, and meanwhile, build up new moral meanings and social relations in reference to the so-called 'mainstream society.' Woronov's sharp observation might open up new possibilities for further discussion of the process of new class formations and social transformations in the rapidly changing Chinese society."