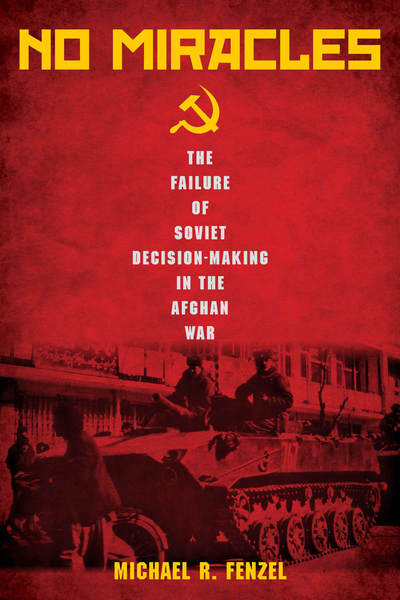 The Soviet experience in Afghanistan provides a compelling perspective on the far-reaching hazards of military intervention. In 1985, Mikhail Gorbachev decided that a withdrawal from Afghanistan should occur as soon as possible. The Soviet Union's senior leadership had become aware that their strategy was unraveling, their operational and tactical methods were not working, and the sacrifices they were demanding from the Soviet people and military were unlikely to produce the forecasted results. Despite this state of affairs, operations in Afghanistan persisted and four more years passed before the Soviets finally withdrew their military forces.

In No Miracles, Michael Fenzel explains why and how that happened, as viewed from the center of the Soviet state. From that perspective, three sources of failure stand out: poor civil-military relations, repeated and rapid turnover of Soviet leadership, and the perception that Soviet global prestige and influence were inexorably tied to the success of the Afghan mission. Fenzel enumerates the series of misperceptions and misjudgments that led to the Soviet invasion of Afghanistan, tracing the hazards of their military intervention and occupation. Ultimately, he offers a cautionary tale to nation states and policymakers considering military intervention and the use of force.

Michael R. Fenzel is an active duty Brigadier General in the U.S. Army, currently serving as a Deputy Commanding General in the 82nd Airborne Division at Fort Bragg, North Carolina. He most recently served as a Senior Military Fellow at the Council on Foreign Relations, Commander of the 3rd Brigade Combat Team and then Chief of Staff for the 82nd Airborne Division. He is the founder of the Council for Emerging National Security Affairs (CENSA), a life-member of the Council on Foreign Relations, and a former Director on the National Security Council Staff in the White House.

"No Miracles<\i> is a readable and valuable contribution to the existing body of work about the Soviet-Afghan War. It is a must and relevant read for international security practitioners and scholars because its conclusions have implications for civil-military relations and strategy for the current war in Afghanistan, which is a protracted stalemate."