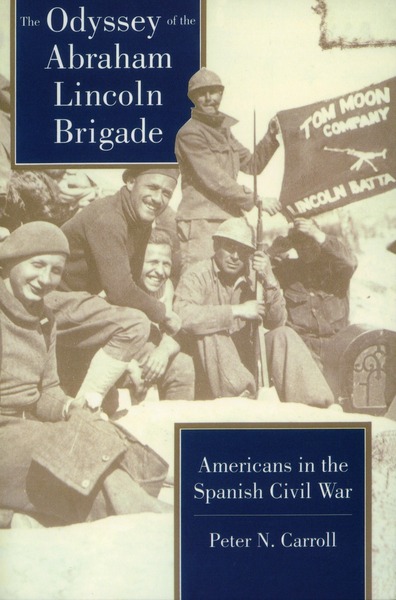 The Odyssey of the Abraham Lincoln Brigade
Americans in the Spanish Civil War
Peter N. Carroll

For over half a century, the history of the Abraham Lincoln brigade—the 2,800 young Americans who volunteered to fight for the Spanish Republic against General Francisco Franco's rebellion in 1936—has been shrouded in myth, legend, and controversy. Now, for the fist time, we have a comprehensive, objective, and deeply researched account of the brigade's experience in Spain and what happened to the survivors when they returned to the United States. (About one-third of the volunteers died in Spain). The book is largely based on previously unused sources, including the newly opened Russian archives, and more than 100 oral histories.

The author charts the volunteers' motivations for enlisting in the fight against Spanish fascism and places their actions in the context of the Depression era. The battleground experiences of the brigade have never before been depicted in such vivid detail, and such battles as Jarama, Belchite, and the Ebro come alive in the participants' words. The author uses the military aspects of the war to illuminate such related issues as the influence of political ideology on military events and the psychology of a volunteer army. He also closely examines the role of the Communist party in the conduct of the war, including the "Orwell question"—allegations of a Communist reign of terror in Spain—and investigates the alleged racial problems within the brigade, the first fully integrated military unit in American history.

The book continues the saga of the brigade by relating the problems of the surviving volunteers with the U.S. Army during World War II; their opposition to the Cold War, the Vietnam war, and U.S. intervention in Central America; the persecution during the Red Scare of the 1950s; and their involvement with the civil rights movement.

Peter N. Carroll is an independent scholar who teaches at Stanford University and the University of San Francisco.

"Peter Carroll has written with great skill and understanding the fifty-year story of the Americans who fought in the Spanish civil war. Never has the complicated and intriguing tale been told so fully, drawing as it does not only from survivors who can recount their experiences, but also from a wealth of original material, including the just-opened archives in Moscow. What is particularly fascinating is the account of the tribulations and triumphs of the veterans in the years after they were 'premature anti-fascists.' This is the moment for this book to appear, and one is grateful that it has been done so well."

"This rare, this astonishing book—rich, authoritative, and moving as it is on its central subject—through Peter Carroll's way of chronicling becomes something even greater: an urgently contemporary touchstone that helps us discern in our time similar contending forces in moral, not political terms—good against evil, might against right, means against ends. In a vivid, pulsing narrative, Carroll encompasses the historical context, the drama of men in battle, and most of all the haunting human beings themselves. But what can be found nowhere else is his account of the succeeding fifty years of those who survived, as they stubbornly clung to their beliefs in the necessity of action and the possibility of transformative social change."

"Compelling . . . swift-moving collective biography of the Lincoln Brigade. . . . A richly detailed story of men and women who threw themselves into the great events of their times, holding nothing back."

"Tapping new sources for the first time, this must surely be considered the definitive work on Americans who fought and died for the Spanish Republic."