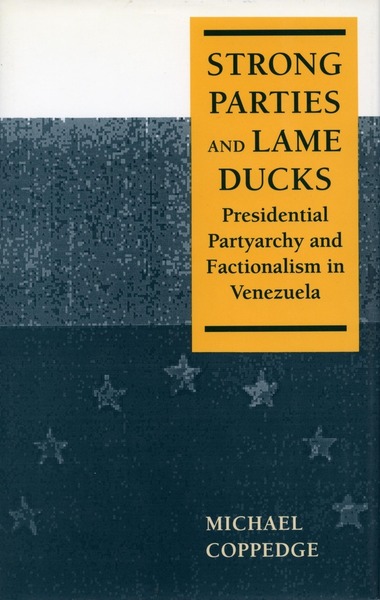 This bold and comprehensive reassessment of democracy in Venezuela explains why one of the oldest and most admired democracies in Latin America became fragile after more than three decades of apparent stability.

"Coppedge has written what may well be the best book ever published on political party behavior in Latin America; it is extensively researched, methodologically sophisticated, tightly argued, and well written. . . . The author demonstrates a mastery not only of Venezuelan and Latin American literature, but also the major theoretical works on party behavior. . . . The work is particularly noteworthy in linking political party behavior to the wider political system, along with suggesting policy changes to enhance the quality of democratic government. But even more significantly, the book is bold and imaginative in the sense that it challenges prevailing scholarship on party behavior and undoubtedly will provoke controversy."

"Coppedge provides a wealth of data from extensive interviews with party elites, thereby shedding light on factionalism and internal clientelism. There is great richness in his treatment of Acción Democrática, which is the major focus for his investigation. . . . The book provides insights which merit testing in other countries."