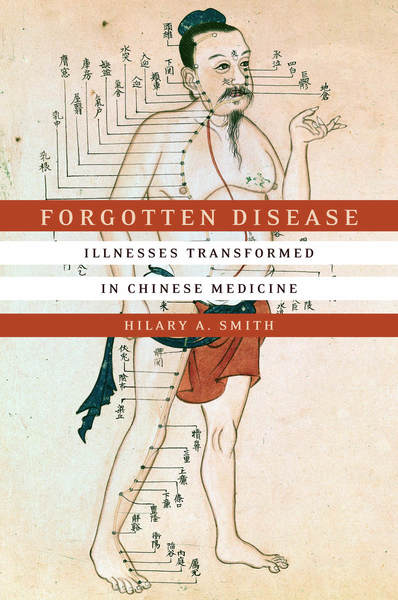 Around the turn of the twentieth century, disorders that Chinese physicians had been writing about for over a millennium acquired new identities in Western medicine—sudden turmoil became cholera; flowers of heaven became smallpox; and foot qi became beriberi. Historians have tended to present these new identities as revelations, overlooking evidence that challenges Western ideas about these conditions. In Forgotten Disease, Hilary A. Smith argues that, by privileging nineteenth century sources, we misrepresent what traditional Chinese doctors were seeing and doing, therefore unfairly viewing their medicine as inferior.

Drawing on a wide array of sources, ranging from early Chinese classics to modern scientific research, Smith traces the history of one representative case, foot qi, from the fourth century to the present day. She examines the shifting meanings of disease over time, showing that each transformation reflects the social, political, intellectual, and economic environment. The breathtaking scope of this story offers insights into the world of early Chinese doctors and how their ideas about health, illness, and the body were developing far before the advent of modern medicine. Smith highlights the fact that modern conceptions of these ancient diseases create the impression that the West saved the Chinese from age-old afflictions, when the reality is that many prominent diseases in China were actually brought over as a result of imperialism. She invites the reader to reimagine a history of Chinese medicine that celebrates its complexity and nuance, rather than uncritically disdaining this dynamic form of healing.

Hilary A. Smith is Assistant Professor of History at the University of Denver.

"The writing of the history of diseases has played a crucial but often invisible role in shaping Chinese medicine as we know it today. Forgotten Disease challenges the dominant historiography with great insights, enabling us to relate anew to the past and to reopen possibilities for further developing this living tradition."

"Forgotten Disease makes significant contributions to the history both of Chinese medicine, and of medicine in a globalizing era. By resisting the easy translation of 'jiaoqi' into a biomedical entity, this book stands as a stellar example of how historians of Asian medicine can decenter the West."

"This fascinating, meticulous study of the unstable concept of foot qi provides a welcome perspective on Chinese medical thought and highlights the pitfalls of retrospective diagnosis. It is a valuable contribution to the nuanced and deeper understanding of Asian medical traditions with broader lessons for all medical historians."

"Smith traces jiaoqi's history from its first mention in a fourth-century Chinese medical formulary as an affliction of northerners when living in "South China" to its thirteenth-century identity as a northerner's dietary disorder, through a sixteenth-century shift to a disease of consumption akin to gout, and into modern permutations from beriberi to athlete's foot in East Asia....Its potential readership...extend[s] to historians of Western medical imperialism, colonial medicine, East Asian public health history, and the global history of public health."