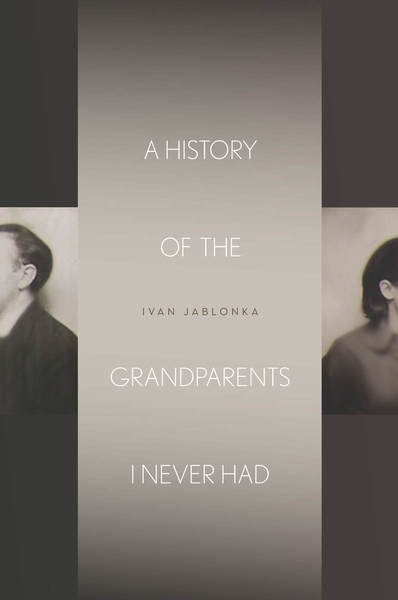 A History of the Grandparents I Never Had
Ivan Jablonka, Translated by Jane Kuntz
SERIES: Stanford Studies in Jewish History and Culture

Finalist for the 2016 National Jewish Book Awards in the Holocaust category, sponsored by the Jewish Book Council.

Ivan Jablonka's grandparents' lives ended long before his began: although Matès and Idesa Jablonka were his family, they were perfect strangers. When he set out to uncover their story, Jablonka had little to work with. Neither of them was the least bit famous, and they left little behind except their two orphaned children, a handful of letters, and a passport. Persecuted as communists in Poland, as refugees in France, and then as Jews under the Vichy regime, Matès and Idesa lived their short lives underground. They were overcome by the tragedies of the twentieth century: Stalinism, the mounting dangers in Europe during the 1930s, the Second World War, and the destruction of European Jews.

Jablonka's challenge was, as a historian, to rigorously distance himself and yet, as family, to invest himself completely in their story. Imagined oppositions collapsed—between scholarly research and personal commitment, between established facts and the passion of the one recording them, between history and the art of storytelling. To write this book, Jablonka traveled to three continents; met the handful of survivors of his grandparents' era, their descendants, and some of his far-flung cousins; and investigated twenty different archives. And in the process, he reflected on his own family and his responsibilities to his father, the orphaned son, and to his own children and the family wounds they all inherited.

A History of the Grandparents I Never Had cannot bring Matès and Idesa to life, but Jablonka succeeds in bringing them, as he soberly puts it, to light. The result is a gripping story, a profound reflection, and an absolutely extraordinary history.

"Ivan Jablonka is a tremendous writer—compassionate and searching, intimate and ambitious—and A History of the Grandparents I Never Had is a painstakingly researched and profoundly heartfelt book that teaches us new and necessary things about family, history and the extraordinary power of storytelling. It's one of the most beautiful books I've read in years."

—Molly Antopol, author of The UnAmericans

"This is history at its best, a combination of rigorous scholarship and impassioned autobiography. Meticulously retracing the lives and times of his Polish-Jewish grandparents, who fled to France in 1938 only to lose their lives under the Nazi regime, Ivan Jablonka miraculously resurrects—for himself and for the reader—the grandparents he never knew."

"A History of the Grandparents I Never Had is an extraordinary book—at once a breathtaking work of historical investigation and a deeply personal meditation on the possibilities and limits of historical knowledge. By uncovering the traces left behind by people who literally vanished into thin air, Ivan Jablonka sheds new light on the Holocaust as well as on our own desire to grasp what cannot be grasped."

Perhaps no moment in modern history has been written about as much as the Shoah. Historians and memoirists, in particular, have striven to re-create or retell this event. While the two genres are distinct, the dividing line between them — objectivity lying to one side, subjectivity to the other — is often breached. In the best of cases, such as Saul Friedlander's When Memory Comes this brackish confluence makes for brilliance. To this select company we must now add Ivan Jablonka's A History of the Grandparents I Never Had."

"This book is a thriller, as compelling as any work of fiction...This book is both poignant and penetrating; gruesome and horrifying. We experience the extremes of human interactions. Recommended for all adult and senior high school Judaica collections."

French Culture
Reconstructing a Child’s Life During the Holocaust