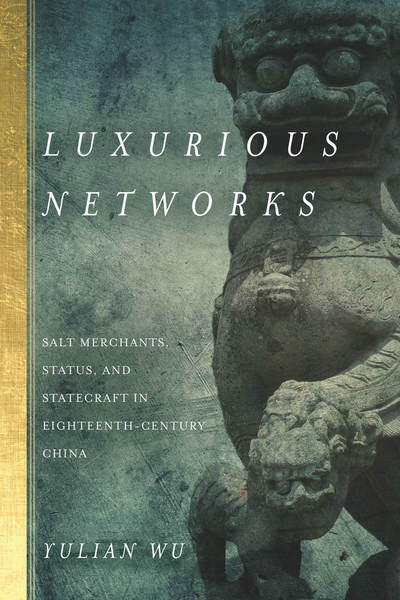 Luxurious Networks examines Huizhou salt merchants in the material world of High Qing China to reveal a dynamic interaction between people and objects. The Qianlong emperor purposely used objects to expand his influence in economic and cultural fields. Thanks to their broad networks, outstanding managerial skills, and abundant financial resources, these salt merchants were ideal agents for selecting and producing objects for imperial use. In contrast to the typical caricature of merchants as mimics of the literati, these wealthy businessmen became respected individuals who played a crucial role in the political, economic, social, and cultural world of eighteenth-century China. Their life experiences illustrate the dynamic relationship between the Manchu and Han, central and local, and humans and objects in Chinese history.

Yulian Wu is Assistant Professor of History at the University of South Carolina.

"Luxurious Networks is a paragon of interdisciplinary scholarship, filled with insights into the political and material cultures of eighteenth-century China. Challenging conventional views of Huizhou's salt merchants as mere literati manqués, Yulian Wu elucidates their centrality in the historical processes of network formation through which Qing rule was constituted."

"Yulian Wu presents the salt merchants of Huizhou as powerful historical actors in their own right, and writes a new history of the high Qing period. Documenting the networks built by marvelous things in motion, this fascinating book makes original contributions to Chinese history as well as material culture studies."

—Dorothy Ko, author of The Social Life of Inkstones: Artisans and Scholars in Early Qing China

"Yulian Wu's Luxurious Network is an articulate and engaging piece of scholarship on Chinese salt merchants in the Qing period...this book sheds new light on the culture and society of Qing China. It also has the potential to invite dialogues with a wider audience. Historians of the Ming and Qing dynasties will find the analysis of the merchants' role in Qing state-building to be interesting. Scholars on cultural and art history will appreciate the author's nuanced descriptions of the luxurious projects in imperial China."

"Wu's fine monograph has raised the ante for the Qing economic historians and revealed the rich potential for further research into the complex relationship between mercantile elites and the throne in mid-Qing China."