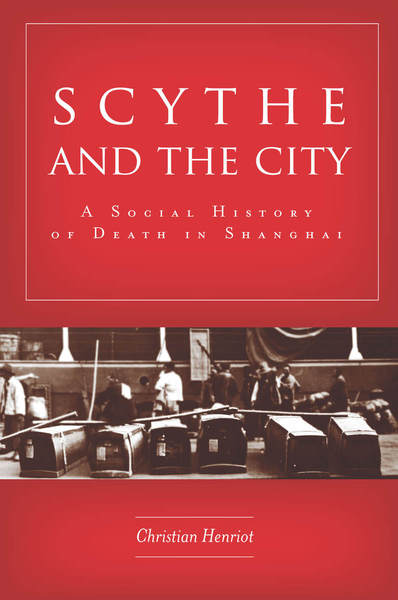 The issue of death has loomed large in Chinese cities in the modern era. Throughout the Republican period, Shanghai swallowed up lives by the thousands. Exposed bodies strewn around in public spaces were a threat to social order as well as to public health. In a place where every group had its own beliefs and set of death and funeral practices, how did they adapt to a modern, urbanized environment? How did the interactions of social organizations and state authorities manage these new ways of thinking and acting?

Recent historiography has almost completely ignored the ways in which death created such immense social change in China. Now, Scythe and the City corrects this problem. Christian Henriot's pioneering and original study of Shanghai between 1865 and 1965 offers new insights into this crucial aspect of modern society in a global commercial hub and guides readers through this tumultuous era that radically redefined the Chinese relationship with death.

Christian Henriot is Professor of Modern History at Aix-Marseille University and the author of numerous books on modern Chinese history, including Prostitution and Sexuality in Shanghai: A Social History, 1849–1949 (2001). He is also Project Director of Virtual Shanghai (virtualshanghai.net).

"Christian Henriot provides an utterly original perspective on Shanghai's modernization. Against a background of periodic epidemics and wars, poverty stands out as the biggest killer. Shanghai sucked in and killed people by the tens of thousands, this human fuel being what fired the city and made it work. Henriot's 'scythe' will stick in readers' minds."

"A city of death: though grim, this is Shanghai in the early twentieth century. Henriot's excellent book shows the unexpected intersections of modernity and traditional custom, whether in the rise of the coffin industry or local guilds' handling of funeral rites. This volume breaks ground as powerfully as the shovels that created Shanghai's modern cemeteries."

"Henriot probes the question of how the city treated its working masses when they became dead bodies. The industrializing city steadfastly pushed graveyards out while the Sino-Japanese War witnessed numerous 'bodies without masters,' disproportionately of children dying in public places. This is a powerful work and a must-read for all readers enamored with Shanghai's famed splendor."

"Based on extensive archival research, Christian Henriot's groundbreaking book Scythe and the City: A Social History of Death in Shanghai offers an original perspective on the subject of death—a previously overlooked aspect by which Shanghai modernity deems to be re-defined....The breadth and depth of archival research on historiography of death in modern Shanghai that the book presents is unmistakably pioneering."