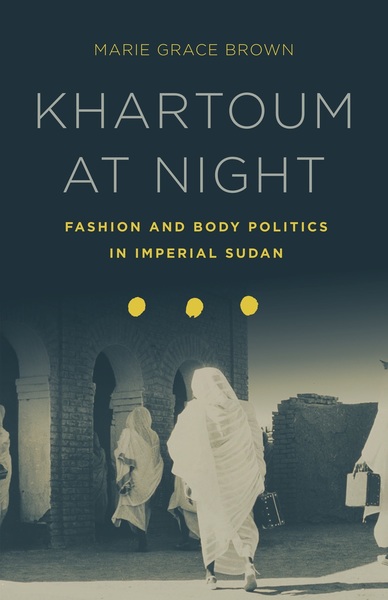 In the first half of the twentieth century, a pioneering generation of young women exited their homes and entered public space, marking a new era for women's civic participation in northern Sudan. A provocative new public presence, women's civic engagement was at its core a bodily experience. Amid the socio-political upheavals of imperial rule, female students, medical workers, and activists used a careful choreography of body movements and fashion to adapt to imperial mores, claim opportunities for political agency, and shape a new standard of modern, mobile womanhood.

Khartoum at Night is the first English-language history of these women's lives, examining how their experiences of the British Empire from 1900–1956 were expressed on and through their bodies. Central to this story is the tobe: a popular, modest form of dress that wrapped around a woman's head and body. Marie Grace Brown shows how northern Sudanese women manipulated the tucks, folds, and social messages of the tobe to deftly negotiate the competing pulls of modernization and cultural authenticity that defined much of the imperial experience. Her analysis weaves together the threads of women's education and activism, medical midwifery, urban life, consumption, and new behaviors of dress and beauty to reconstruct the worlds of politics and pleasure in which early-twentieth-century Sudanese women lived.

Marie Grace Brown is Assistant Professor of History at the University of Kansas.

"This fascinating book advances African gender history by breaking new ground for the study of bodies and dress. In Marie Grace Brown's superb analysis, the tobe not only serves as a leitmotif of women's quest for spatial and public mobility but unfolds as an archive of their worldviews. Khartoum at Night will captivate the reader, and it's highly recommended for the classroom!"

"Marie Grace Brown completely reorients the history of Sudan. Exploring the nationalism and the political acumen of northern Sudanese women, she adds important, original insights of the gendered history of Africa and the Middle East—Sudan's demographic presence in both is huge—by politicizing the manufacture, design and consumption of clothing. Deeply researched and gracefully written, Khartoum at Night is a brilliant work."

"Marie Grace Brown's beautifully written monograph, Khartoum At Night: Fashion and Body Politics in Imperial Sudan, is a history of northern Sudanese women's bodies in motion during the Anglo-Egyptian Condominium (1899-1956). In the first English-language monograph to focus on women as actors in Sudanese history, Brown nimbly weaves the quotidian movements of Sudanese women back into a historiographical tapestry that has previously kept them "fixed at home," unconnected to the political world around them....Brown's exceptional analytical insights and flawless writing made writing a review that captured the book's kinetic energy a truly difficult task. This book will make an excellent addition to undergraduate and graduate courses in a range of fields, including but not limited to the history of the modern Middle East, North Africa, and East Africa; women's and gender studies, material culture and body history; and the history of imperialism and colonialism."

"Marie Grace Brown provides a nuanced account of the impact of politics and economics on Sudanese women during the period of British colonial dominance....This intense reflection of Sudan's history offers a fresh perspective on current events."