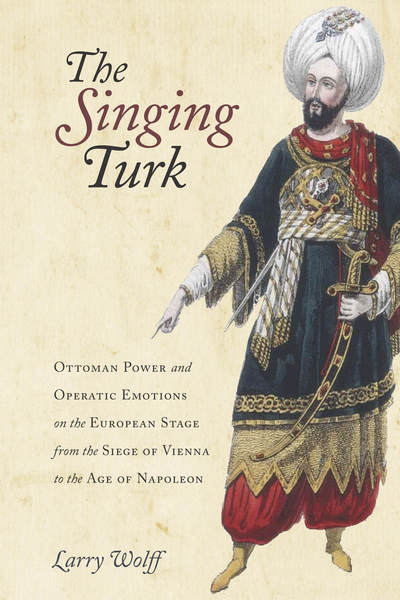 While European powers were at war with the Ottoman Empire for much of the eighteenth century, European opera houses were staging operas featuring singing sultans and pashas surrounded by their musical courts and harems. Mozart wrote The Abduction from the Seraglio. Rossini created a series of works, including The Italian Girl in Algiers. And these are only the best known of a vast repertory. This book explores how these representations of the Muslim Ottoman Empire, the great nemesis of Christian Europe, became so popular in the opera house and what they illustrate about European–Ottoman international relations.

After Christian armies defeated the Ottomans at Vienna in 1683, the Turks no longer seemed as threatening. Europeans increasingly understood that Turkish issues were also European issues, and the political absolutism of the sultan in Istanbul was relevant for thinking about politics in Europe, from the reign of Louis XIV to the age of Napoleon. While Christian European composers and publics recognized that Muslim Turks were, to some degree, different from themselves, this difference was sometimes seen as a matter of exotic costume and setting. The singing Turks of the stage expressed strong political perspectives and human emotions that European audiences could recognize as their own.

Larry Wolff is Professor of History and Director of the Center for European and Mediterranean Studies at New York University. He is the author of Paolina's Innocence: Child Abuse in Casanova's Venice, The Idea of Galicia: History and Fantasy in Habsburg Political Culture, Venice and the Slavs: The Discovery of Dalmatia in the Age of Enlightenment, and Inventing Eastern Europe: The Map of Civilization on the Mind of the Enlightenment—all published by Stanford University Press. Visit Larry Wolff's website at www.singingturk.com

"Elegantly and engagingly written, The Singing Turk is the first exhaustive and definitive investigation of the largely forgotten body of operas on Turkish themes. It is also an intellectual history of European identity as it variously rejected, resisted, flirted with, but never genuinely embraced Turkey and the Turks, with far-reaching present-day relevance."

"Larry Wolff's book combines in the best way imaginable the study of history and of opera. I have never hummed and drummed as much when reading a book."

"This tome is a vigorous, literate and well-informed examination of the place of Ottoman- Turks in European operatic traditions that succeeds in making sense of a complicated, intricate and otherwise fragmented page in Western history. A remarkable feat, The Singing Turk is the first full account of a musicological phenomenon that, following centuries of conflict, underwent unprecedented changes to its fundamental intellectual roots following the defeat of the Ottoman army outside Vienna in 1683 and the transformation of their portrayal in popular culture across Christian Europe in the eighteenth century...It is likely to become the standard text on the subject for English- speaking readers, and can be warmly recommended to graduate and undergraduate students with an interest in opera, music, history and the dynamic tensions of Christian– Muslim relations."

"The Ottoman Empire, seen in stage characters called Turks, served as an important vehicle for musical theater during the last four hundred years. Larry Wolff has produced a remarkably wide-ranging survey that suggests how the characters, the settings, and the music reflect social and political contexts of the time. Knitting together the work of musicologists, historians, and political scientists, Wolff establishes what members of the public inferred about the evolution of the Ottoman Empire within international affairs from watching these shows."

"Engagingly written and judiciously illustrated, The Singing Turk follows the evolution of Ottoman themes in Italian, German, and French opera during the long eighteenth century (roughly 1680–1820)...This book is rich in cultural and historical detail that somehow never threatens to overwhelm the author's overall analysis, which engages not only with geopolitics but with Orientalism and the history of emotions."

"Wolff has a gift for contextualizing his subject without being reductive. This quality enables him to historicize perceptions of Turkishness instead of seeing them simply as emanations of some static "Other." Although not a professional musicologist, he deserves praise for venturing into a field usually confined to specialists. Here his status as an outsider may well be an asset. His forays into the strictly musical dimensions of his subject are erudite and well-informed, but his lucid style is accessible to nonspecialists. The result is a book that general historians as well as music scholars will find rewarding."

"In this penetrating study, Larry Wolff suggests not only how operatic representations of Turkish themes and characters might have reflected transformations in perceptions of Ottoman power, but also how – as in, say, Montesquieu's Lettres persanes, yet closer to 'home' – they enabled Enlightened criticism of European 'reality.'"

"As a general historian, Wolff can ignore the boundaries that generally surround—and defend—musical studies, and the result is refreshing, as well as confident in its command of musical terminology."

"[T]he brilliant idea of opening a website (www.singingturk.com) bringing together musical and operatic excerpts for every chapter with brief commentary about each clip raises the status of this work from an academic reading to an operatic experience on its own right."--Yasir Yılmaz, Austrian History Yearbook

"Wolff combines history and music at an extraordinarily deep level and on a particularly large scale....[He shows] that the Singing Turk and associated figures, values, and musical elements had, indeed, played a paramount role in the construction of European identity, and that operatic stages had been primary venues for the articulation of that process....Never before has a study been able to illustrate this intricate process with such completeness and richness."

Muslims, Christians and Mozart: Seeking Harmony at the Met Opera

Rorotoko
Understanding the Siege of Corinth: What Rossini’s (and Mozart’s) Turkish operas say about Western Relations with the Middle East