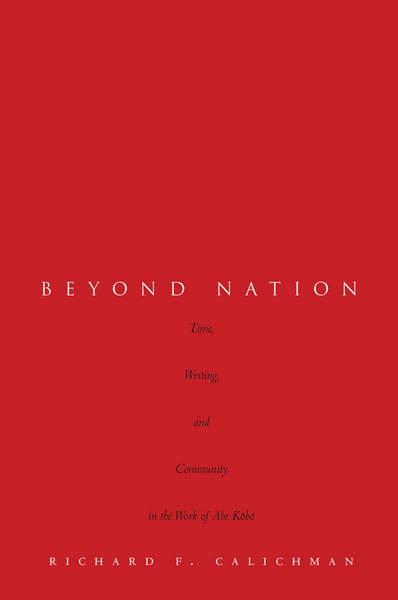 Beyond Nation
Time, Writing, and Community in the Work of Abe Kōbō
Richard F. Calichman

In the work of writer Abe Kōbō (1924–1993), characters are alienated both from themselves and from one another. Through close readings of Abe's work, Richard Calichman reveals how time and writing have the ability to unground identity. Over time, attempts to create unity of self cause alienation, despite government attempts to convince people to form communities (and nations) to recapture a sense of wholeness. Art, then, must resist the nation-state and expose its false ideologies.

Calichman argues that Abe's attack on the concept of national affiliation has been neglected through his inscription as a writer of Japanese literature. At the same time, the institution of Japan Studies works to tighten the bond between nation-state and individual subject. Through Abe's essays and short stories, he shows how the formation of community is constantly displaced by the notions of time and writing. Beyond Nation thus analyzes the elements of Orientalism, culturalism, and racism that often underlie the appeal to collective Japanese identity.

Richard Calichman is Professor of Japanese Studies at The City College of New York and translator of The Frontier Within: Selected Writings of Abe Kōbō (2013).

"Beyond Nationmarks a rare and fortunate encounter of theoretical passion with the work of Abe Kôbô. It is also a public protestation against the conservative climate of academia in the United States and Japan. Calichman makes a dimensional leap from the previous studies of Abe Kōbō's work and modern Japanese literature."

"At a time when Abe Kōbō's work once again reverberates powerfully within contemporary life, Richard Calichman offers a timely intervention into this author's complex and under-thought oeuvre.But beyond the searching insight that he brings to bear, Calichman offers a series of original and critical interventions that resonate just as poignantly with the present."

"A remarkable writer and philosopher, Abe Kōbō raised questions about human existence and the boundaries of identity which have powerful resonance for the present day. Richard Calichman's work offers a profound and illuminating perspective on Abe's vision of the human condition."

Calichman reads Abe Kōbō's work with extraordinary precision, gathering a focus that unfolds in a layered dialectical cascade of regressions."