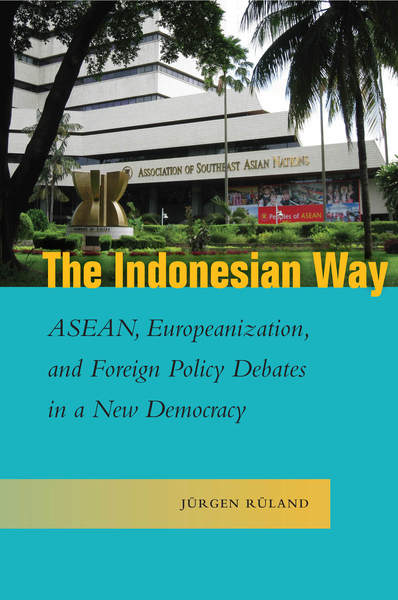 On December 31, 2015, the ten-member Association of Southeast Asian Nations (ASEAN) ushered in a new era with the founding of the ASEAN Community (AC). The culmination of 12 years of intensive preparation, the AC was both a historic initiative and an unprecedented step toward the area's regional integration. Political commentators and media outlets, however, greeted its establishment with little fanfare. Implicitly and explicitly, they suggested that the AC was only the beginning: Southeast Asia, they seemed to say, was taking its first steps on a linear process of unification that would converge on the model of the European Union.

In The Indonesian Way, Jürgen Rüland challenges this previously unquestioned diffusion of European norms. Focusing on the reception of ASEAN in Indonesia, Rüland traces how foreign policy stakeholders in government, civil society, the legislature, academe, the press, and the business sector have responded to calls for ASEAN's Europeanization, ultimately fusing them with their own distinctly Indonesian form of regionalism. His analysis reframes the nature of ASEAN as well as the discipline of international relations more broadly, writing a narrative of regional integration and norm diffusion that breaks free of Eurocentric thought.

Jürgen Rüland is Professor of International Politics in the Department of Political Science and Chairperson of the Southeast Asia Program at the University of Freiburg.

"Avoiding the Western-centrism trap characteristic of rationalist theories of regionalism, Jürgen Rüland cleverly builds on current constructivist theories of norm diffusion to explain how foreign policy stakeholders in Indonesia have responded to external ideational and normative pressures seeking to Europeanize ASEAN. With intelligence and nuance, he offers an essential study of comparative regionalism and Indonesia's role in the ASEAN Charter."

"The book makes a substantial contribution to our understanding of Indonesian foreign policy and ASEAN regionalism. It is an important piece of work, and I found the author's arguments convincing and compelling."

"In addition to its important theoretical contribution to regional integration studies—highlighting the complex processes of localization and that of omnidirectional diffusion, signifying that Europe is not the sole source of inspiration about regional integration—Ruland's book also provides colorful insights into the dynamics of foreign policy decision-making in post-Suharto Indonesia....This book is a welcome addition to the literature on Indonesia's foreign policy and ASEAN"

"[T]he book is a very welcome addition to recent, more theoretically-informed scholarship on foreign policy in Southeast Asia and ASEAN Studies, and will be of interest to both scholars and policymakers interested in this region."––Stéphanie Martel, Pacific Affairs